Geeklings, a very Happy New Comic Book Day to you all! Welcome to the Pull List where it’s all things comics all the time but especially on Wednesday. Or as I call it, the greatest day of the week. I hope this particular Wednesday finds you all in good spirits, one day closer to the weekend, and ready to get your read on. Because let me tell you, folks, there are some books to be reading this week.

One of my favorite parts about writing the Pull List each and every week is the research aspect of the column. The part where I start to look up the books that are coming out this week. It’s kind of like Christmas morning. Sure, I know the books that are on my own personal pull list but sadly my wallet doesn’t allow me to buy alllll the comics. Supposedly I have to pay bills, rent, and need to feed my cat. If those things didn’t exist though… I’d have all the comics all the time. With that being said though, while I was researching this edition of the Pull List I went through a few moments of continued elevated excitement. It was like, “oh yeah, this book comes out this week. Oh yeah, this book comes out this week too. Oh Yeah, this book comes out this week!” And I use quotations here not only to emphasis what was being said but also to showcase the fact that I was saying these things out loud. To no one but myself. That’s how excited I get for New Comic Book Day.

I’m sure you’re all wondering just what books I’m talking about and what better time than the present to start breaking down the best reads of the week. Without further ado, prepare your faces because they’re about to get melted. Let’s kick this thing off with… 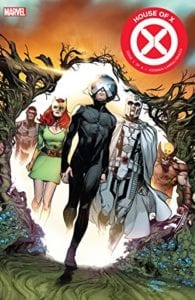 House of X #1– For the last couple of months, we have been preparing ourselves for a change in the X-Men books. A massive change in fact. All ongoing series have been canceled and all writing teams having been dispursed to make room for the Marvel return of Jonathan Hickman. There is no doubt that Hickman is a mastermind when it comes to writing comics and he has been brought in to lead a new direction in the X-Men franchise. Almost as if we’d be starting from scratch. With two ongoing books that are closely related, Hickman looks to usher the X-Men into a new era. If you’ve been trying to figure out X-Men continuity over the last few years, good luck. There is just so much going on. From Bendis’s timey wimey stuff to Matthew Rosenberg’s just completed arc, the X-Men have kind of been all over the place and perhaps because of it, have lost a step in the greater Marvel Universe. It was damn near impossible to pick up an X-Men title and try and make sense of what was going on. The return of Hickman hopes to give the franchise a more streamlined look to draw in more fans and to remind us older fans of the glory days of mutants. Here’s the thing though, Jonathan Hickman is a complicated writer. I say this as a compliment but also as a warning. Hickman’s writing demands a lot from his readers and isn’t always clear, to begin with. There are layers to be had and mysteries that take time to unfold. This first issue… I read it early this morning and I haven’t stopped thinking about it. It goes off kind of like a timebomb and once you start pulling at one thread a million others appear. What does this mean? Who could this be? What is going on here? Are all required questions for reading this book. Hickman clearly has a vision here and within that vision are a million questions he wants us to be asking. This might the first X-Men title I’ve read that both feels and doesn’t feel like an X-Men book. There is something afoot here and I don’t want to go into spoilers now but find me on Twitter and we can discuss. I’ve got some thoughts about the current state of the X-Men and what it could possibly mean for this title moving forward. One things’ for sure, this is one hell of a book. 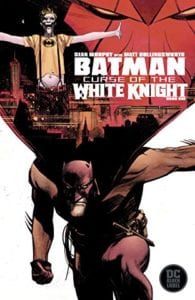 Batman: Curse of the White Knight #1– Sean Murphy has returned to his alternate Batman universe with a sequel to his stellar Batman: White Knight series. You know, the one where the Joker becomes a good guy and tries to show the world that Batman might not be the best thing in the world. I loved that series and part of it was the art, the book is also drawn by Murphy, but it was mostly Murphy’s passion for these characters and his presentation of something new based off the lore of characters we’ve spent lifetimes with. Curse of the White Knight looks to continue that trend with the inclusion of Azrael a character who brings much fanfare with him. On top of that, this series looks to explore the Waynes and whether or not they were good for Gotham and what that could possibly mean for Batman. With the Joker once again a villain, what does Murphy have planned next for this alternate universe he’s created? I don’t know, but I’ll tell you this, I’ll be here each month buying the next issue. I’m a sucker for strong character writing and Murphy delivers that in spades. 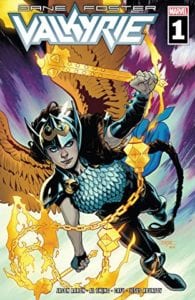 Valkyrie: Jane Foster #1– Okay, this might be slightly confusing especially after the most recent SDCC announcements but stay with me here. Jane Foster once again has her own ongoing series but instead of being Thor she now will be a Valkyrie. This all stems off of the events of Jason Aaron’s War of the Realms and ushers in a new era for Jane Foster. I for one am ecstatic. The Jane Foster Thor run is one of my favorite comic arcs in recent memory and I’m not going to lie, I was slightly disappointed when she had to give up the mantle. Aaron had done such a tremendous job with her character and her journey that I needed more, and now, I’ve got it. Written by Aaron and Al Ewing with some kickass art from Cafu the next chapter of Jane Foster’s life is unfolding. Now cancer-free, Jane looks to reestablish the power of the valkyrie after they were decimated during the War of the Realms. If you’re excited for Jane Foster to become Thor in the MCU, and boy am I, then this book is right up your alley. The Marvel Universe is better with more Jane Foster in it, and that’s just a fact. 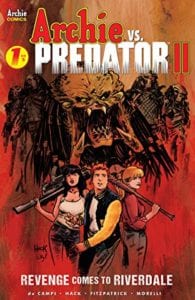 Archie vs Predator #1– Does this book require much hyping? No, no it does not. One of my favorite things about Archie books is how they’re willing to shake things up with these random crossover events that you didn’t know you needed. Who in a million years would have thought Archie vs Predator would be a good idea? Yet, here we are and this book is bananas. This isn’t the first time that the Predator has visited Riverdale either, and that makes this mash-up all the more fun. Go into this fully expecting all the crazy action and absurdity you would get from a Predator movie just with characters from Archie. It’s really the gift that keeps on giving. 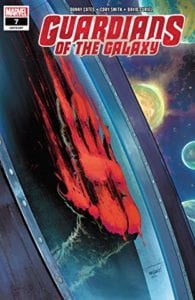 Guardians of the Galaxy #7- Ever since Donny Cates took over the Guardians series I have been patiently waiting for this arc. Hard times have kind of fallen on our Guardians as of late. Drax didn’t make it out of the Infinity Wars event. Gamora became a villain and then left the team only to be forced back when Thanos tried to reemerge. Groot now sports a mohawk and is sort of in charge while Quill is a bit of a mess. The first arc ended with the new team preventing the return of Thanos, for now, and some new cast members being able to call themselves Guardians. All through that though there was one thing missing. One furry trash panda sized thing. Rocket Raccoon. Cates did an excellent job in building the mystery around just why Rocket is missing and now it’s time we found out what exactly happened. A new arc starts here titled “Faithless” where we might just get the death of Rocket. I certainly hope not but I have loved Cates’s run on this title so much that I can’t wait to get started. He’s done such a tremendous job of cashing in on old story arcs and character moments while making this book feel new and exciting. Am I emotionally ready for the death of Rocket? Nope, not at all. Is that going to stop me from reading this book every month? Nope, not at all. 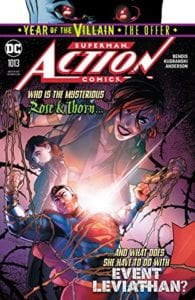 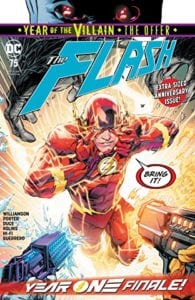 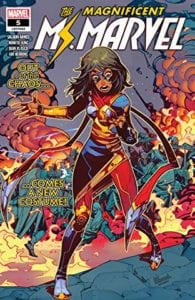 There you have it Geeklings, all the best books to get your mitts on this week. As always, if you feel like I’ve left anything off this edition of the Pull List be sure to sound off in the comments. If you’d like to talk more comics with yours truly then you can find me over on Twitter @iamgeek32. I’m dying to talk House of X #1 so be sure to hit me up. I’ve got theories. Outside of that, this is where I leave you… until next Wednesday that is. Be sure to visit your local comic book shops and get your read on this weekend. I’ll see you all back here next week with a brand new crop of books to wrap your eyeholes around. Happy reading and many huzzahs!