The rumors are true- USA’s Psych is coming back! This time we’re going to see our favorite fake psychic in movie form.

The original cast is also coming back for the occasion. James Roday and Dulé Hill as best friends and partners Shawn and  Gus. The Santa Barbara Police Depoartment will also see the familiar faces of Timothy Omundson as Lassiter, Maggie Lawson as the lovely Juliet as well as Kirsten Nelson as Vick. Even Corbin Bernson is back as Shawn Spencer’s father.

“Psych is a beloved part of our USA family, and what better time to reunite with family than the holidays.” said Chris McCumber, President, Entertainment Networks for NBC Universal Cable Entertainment. “Steve and James have taken the unique brand of comedy that the series honed over eight seasons and packed it in to a two-hour movie that successfully rekindles one of the greatest bro-mances in television history.” 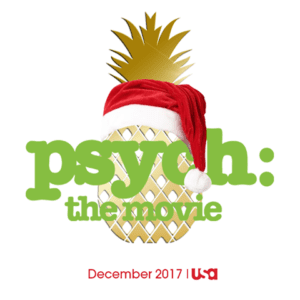 Psych had a very successful 8 season run that ended in 2014.  So what has the cast been up to? Roday has been a few films as well as directing some TV episodes and Hill has been busy acting and now he’s joined the cast of Suits. The rest of the cast has been just as busy filming as we are super lucky to get them all back for this reunion.

“Psych has an absolutely phenomenal and constantly refreshing fan base. We couldn’t be more thrilled to gift our Psych-os this holiday season with Psych: The Movie,” said Jeff Wachtel, Chief Content Officer, NBC Universal Cable Entertainment, and President, Universal Cable Productions. “Steve, James, Dulé, and the rest of the gang are all returning for a delightful holiday movie that will not — nay, dare not — disappoint!”

I wonder how many pineapples will be in the movie.

See you guys in December for the premiere of Psych: The Movie.