Last Week, Michael was unsuccessful  in his most recent escape attempt out of Ogygia. With things going crazy in Ogygia and back home with Sara in NY due to “POSEIDON”, things aren’t looking good for our heroes right now. With that in mind, let’s see how much crazier it can get with this Tuesday’s shocker titled “The Prisoner’s Dilemma”. Keep in mind, this will be the shortest review I have written. This episode is full of shocks and to preserve those events in question, FOX has asked me to refrain from spoiling certain events in this episode. Rest Assured, this is the most shocking and deadly episode of this season so far.

The episode starts with Lincoln checking in on a roughed up Sheba. She’s still trying to figure out how to procure passports when C-Note comes in and informs Lincoln of terrifying news: ISIL is taking neighborhoods by the hour, and if they get to the airport NO ONE is getting out.  Their window of escape is dwindling, and their chance to hop on a plane and get out may be running short, but Lincoln refuses to go without Michael.

Speaking of Michael, things are going from bad to worse. Newly recaptured and put in a solitary cell next to the 0ther attempted escapees, his next plan hinges on the help of a man who he just betrayed:Ramal. Ramal is not having it, as he sees that either way  things go, he wins(If the prison is bombed and he dies, he’ll be in Paradise; If he’s rescued, than it is through the Grace of Allah).

Back in America, T-Bag confronts Kellerman under orders from Sara. T-Bag has not forgotten that Kellerman exonerated everybody but him from the group and he let’s Kellerman know right off the bat. T-bag continues his interrogation about Kellerman and his link to POSEIDON. If you think that the bombshells Kellerman drops is the biggest news from this encounter, you will be sadly mistaken. This moment could very well be a GAME CHANGER for the rest of the season.
Remember when I said Ramal was not interested in helping Michael escape? Well things change very quickly once the guards decide to abandon their posts due to the war brewing outside. A rebellion is brewing on the inside with the goal to send ISIS a message that involves breaking into solitary and killing Kaniel Outis/Abu Ramal. Thus, the next Breakout begins!

As crazy as these events are, this is just the first 30 minutes of the episode. The second half is some of the most tense and dramatic moments of the show. No one is safe as the escape begins. Double Crosses, stand-offs and good old fashioned running are par for the course, as is edge of your seat tension and pulse pounding thrills. This episode stands out as a personal favorite, not just in this season but the entire series overall as the writers of the show take some big chances that pay off extremely well in the shocks department.  You will be on your feet screaming by the end of this episode, and what’s more insane is we still have 5 episodes left after this one!! 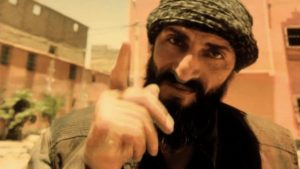 Every review I like to point out an actor whose performance stands head and shoulders above the others in each episode. This episode’s standout is newcomer Numan Acar, aka Abu Ramal. In this episode, we see just how evil Ramal is, and his portrayal pulls no punches. What’s scary about this character is his strong assertion that no matter what, things will fall in his favor so he has no problem watching someone die or killing someone to further his purpose.  Numan absolutely comes into his own on this episode, making you worry that much more for anybody who has crossed Ramal and what those punishments may be for them. With that, that is all I have for this week’s episode of Prison Break. I’d love to hear your thoughts once you see it this Tuesday!
If you want to talk Prison Break or anything else you can find me on Twitter @cjcnov88 or you can catch me on the Dave and Creech Show Podcast every week with my cohost Dave Sheridan on Spreaker/Itunes! See you guys next week!