Welcome back everyone to my weekly review of the newest Prison Break episode! I’m a couple days late but in the end, I feel like the review will benefit better being released after the show as opposed to before. When we last saw the show, the escape finally happened and Kellerman and Ramal were killed. Also, is Jacob really in cahoots with POSEIDON? We’re officially halfway through the season with this episode so let’s see what happens next!

Following the events of last week’s episode, T-Bag wastes no time in finding Sara. “You’re sleeping with the enemy,baby” recounts T-Bag as he shows her photos of Jacob with A&W. Sara immediately runs off to find her son. Speaking of acting quick,fast and in a hurry,ISIL forces waste no time in putting a giant bounty on the head of whoever kills the murderers of the “Martyred” Abu Ramal. That doesn’t bode well for Michael and company, who has decided that now is the time to bring up past issues with each other, finally tying the plot line of the oft forgotten “Final Break” into the current story.

Next, we are introduced to a one eyed terrorist by the name of Cyclops. Yes, you read that right.  CYCLOPS. He is also apparently an astute tracker as well. I will say that in a show that occasionally asks you to suspend disbelief for the sake of entertainment that this character may have been a little too much. But I digress, the one eyed Daryl Dixon alerts ISIL forces, and Michael in the group get trapped in a building Assault on Precinct 34 style.

While Lincoln and Michael prepare to go pipe/wrenches against ISIL, a little bit of Queen and rubbing alcohol evens the odds and they escape from the building but not without incident as Sharpshooter Cyclops is able to kill Sid. It’s a sad moment that we don’t really get to digest as Michael and Company have to try to get to a plane that C-note has been attempting to secure the entire episode. It’s a case of too little too late for Michael however, as C-Note is forced to take off to avoid capture just as Michael reaches the runway. 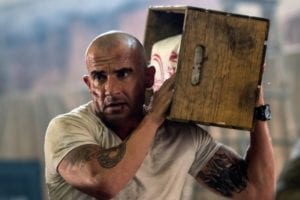 With that, another episode of Prison Break concludes and I think we’ve got our storyline set for the remaining 4 episodes. It seems that while Michael and company try to figure out a new way to escape the country, C-Note may go back home to assemble a supergroup to help them escape(Sucre,T-Bag,etc). Only time will tell if my prediction comes true and we’re less than a week away from the start of some possible answers. All that’s left to say is that all I hope for is that we’ve seen the last of Cyclops. Please.