Right off the bat I just want to apologize for the lack of episode preview. I thought because of the holiday that Preacher would be taking a week off, and when I saw the light on my DVR go on I knew I had a made a little bit of a mistake. That’s on me. Sorry guys. But that won’t stop me today from providing you with one kick ass review.

Well, our space demon finally has a name. Genesis (which if you believe Cassidy, is a terrible name for a band but as far as space demons go… I think it’s quite biblical) comes about from your classic Romeo and Juliet story. There’s a war in Heaven (duh) and an angel meets a demon and they just so happen to fall in the love aaaaaaand next thing you know there’s a space demon which is an abomination for both sides but super powerful, as we can attest to. It was good to finally get some answers to what it is that has been giving Jesse his super God power, and knowing that it’s a little bit good and a little bit bad makes it all the more dangerous. I think it conforms to the person it’s inhabiting and since Jesse wants to be good, but is so good at being bad, the power has been mostly good. Or has it?

Fiore and DeBlanc have eaten up all the scenes that they have been a part of, and watching them converse with Jesse was excellent. Not only did we get some much needed back story, but we got an interaction that allowed Jesse to remain selfish. Despite warnings of how he shouldn’t use Genesis, whoops, Jesse chooses to keep it feeling that it’s God’s will. Which is kind of an interesting standpoint. God gave people free will (and I assume angels and demons as well…?) and through that free will Genesis was created. Then, Genesis broke out of it’s coffee can and found Jesse which I guess could be considered God’s plan. Maybe. Or it could be more what Eugene was saying near the end of the episode but we’re getting ahead of ourselves. 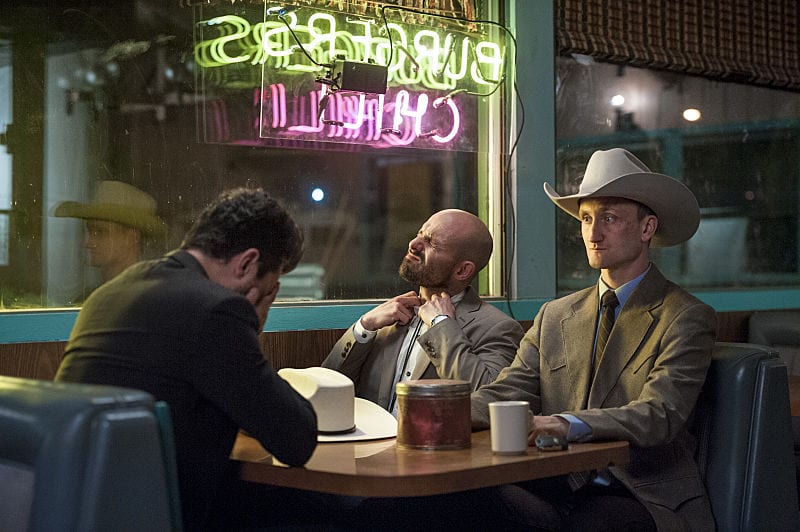 The opening fifteen minutes of Preacher this week were crazy town banana pants as we got one of the shows most bloody/slightly hilarious fight scenes. I’m assuming that the woman that they were trying to restrain was an angel because Fiore and DeBlanc have been acting rogue in hopes that no one would notice that they’re gone. So much for that. The hotel battle was great and I loved watching how the bodies of Fiore and DeBlanc kept piling up on the floor. Added an entertaining element to all the violence. That mixed in with the arrival of Cassidy who just caps our angel without thinking twice. So much for restraining. Hands down some of Preacher’s best work thus far.

One of the things that worked the most about this episode was how all the stories being told came together. In previous weeks it seems that the multiple story lines have been existing on their own, which is not a problem as it’s helped expand this universe, but I really enjoyed how everything came together here, and there was nothing more important than Eugene. Poor, poor Eugene. I’ve been saying it for weeks now that Eugene is the most sympathetic character in the show. Granted we don’t know exactly what he did that has him labeled a murderer. Obviously we know that he murdered someone but we don’t the circumstances of that murder. I believe that it wasn’t intentional, and that’s me doing my best Batman, considering he tried to kill himself afterwards. There is tons of guilt in Eugene and the towns folk don’t make it any easier for him to try and move on. Not saying that he should move on but he should be given the opportunity of redemption or a fresh start. How heart breaking was that scene where he goes and watches the fireworks with the boys who are trying to make friends? Had to be such an awful feeling for him expecting to be walking into a trap (it’s a trap) and then experiencing something “beautiful”. I don’t know Geeklings, my heart kind of breaks for Eugene.

The scene between Jesse and him was just as good as the opening as he told Jesse to undo the forgivness. Think of the maturity required for a teenage boy to tell his preacher that he doesn’t want to be forgiven. Well, he does, but he wants it to be done naturally. That he feels that whatever this super power Jesse has feels more like cheating than God’s work. That’s enough to really get under Jesse’s skin. It is clear after this conversation that Jesse has a clear end game here. Use Genesis to save the town and then leave the town. Promise fulfilled. I’m starting to believe that if the gospel reaches any of the people comes secondary. Jesse is looking for his loophole and found it in Genesis. Why else would he mount a loud speaker on the outside of the church? Projecting his voice to reach more people so this promise can be done and over with. I think this raises the question of what Jesse would do post being the preacher, but we aren’t there yet. 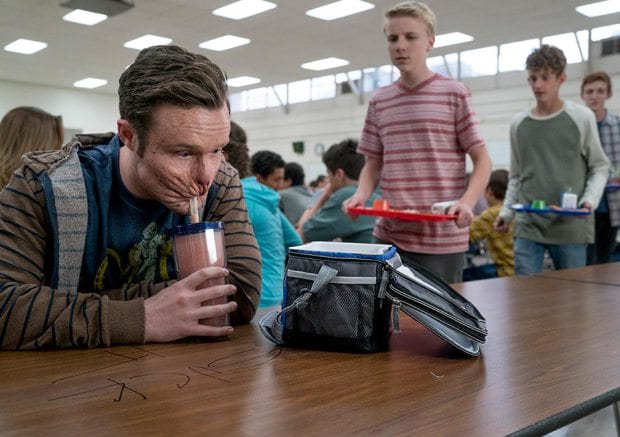 Instead we witnessed more of the literal power of Genesis (remember the guy who cut his heart out for his mom) as Jesse becomes frustrated with Eugene’s rational thought and tells him to go to hell. There is an awful noise, especially awful if you consider that a portal to hell opened up in a church, and Jesse turns around to see that Eugene has vanished. Much to my surprise here, Jesse goes on to business as usual. I would have thought that there was a bit more compassion and concern for the well being of Eugene, but I think he might have been overwhelmed with this new power discovery. Also what a terrible thing to happen to Eugene. He’s the only character (outside of Emily) who understands what the word of God is supposed to be. Eugene understands that forgiveness is something that is earned not given away for free, and is willing to carry the burden of his sin. And what’s his reward? An express elevator trip to hell! Way to go preacher.

Elsewhere in town we saw Tulip lose her mind a bit and storm Emily’s house demanding that she leave her boyfriend alone (that’s slightly more awkward than watching her pee last week), and then they became… besties? Tulip is unraveling pretty good here and has become obsessed with Jesse and his ability to say no to her. Which just goes to show the more you ignore a girl who can make a bazooka out of cans the more she’s going to threaten your pretty church aid. The struggle is real. I am interested in seeing if this relationship between Tulip and Emily continues as it seems the one between her and Cassidy has fallen apart. Poor Cassidy.

The Mayor was put into an interesting predicament this week having witnessed the murders of four people who are now obviously missing. I thought his scene with Jesse was good as it showed how little Jesse cares about the things that don’t directly concern him. Not saying that he doesn’t care but he’s more bigger picture (save the town promise over) than conversing with people who he feels are kind of beneath him. Plus Tulip showed up and that was all types of distracting. I will be curious to the fallout that happens with the mayor aligning himself with Odin though (covering up the murders). If Odin didn’t secretly run the town before he absolutely does now.

There you have it Geeklings. Preacher provides it’s best episode of the season and really has the ball rolling towards the last four episodes of the season. What did you guys think? Did Eugene get a bad rap? Will there be more angel battles? Can Jesse actually succeed at what he’s trying to do? The comments are yours.