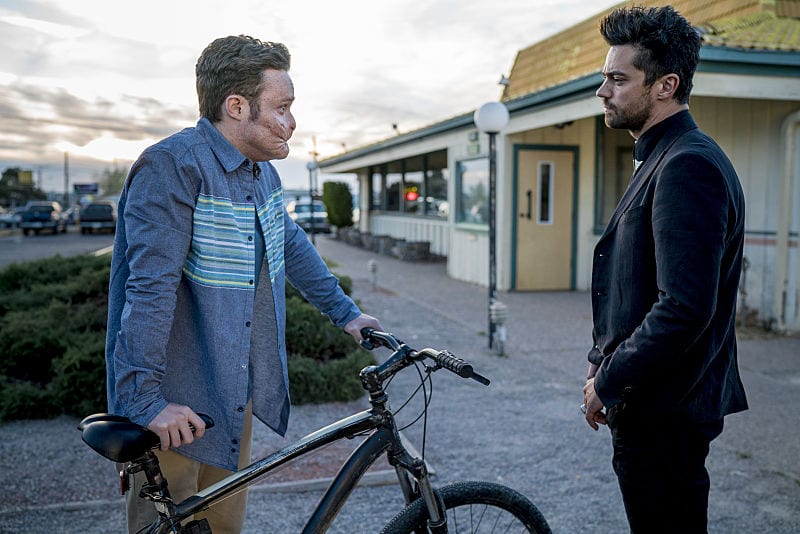 Preacher hits the half way point on it’s first season (and here’s hoping there will be a second) and things are really starting to pick up. Last week Jesse, with the use of his space demon voice, convinced Odin to join his flock and one has to think that there will be some repercussions to come from that. While Odin isn’t the mayor of our little town there is no doubt that he holds a great deal a power. One might think that the church won’t need free TV give a ways to bring people in, that maybe the power of Odin will draw them (oh Thor where art thou).

Else where Tulip and Cassidy have met up and she knows he’s a vampire. Cassidy has sort of found himself in a tough position in the last couple of weeks with our two government officials from Heaven requesting his services, and one has to think that Tulip will try and find a way to exploit his closeness to Jesse too. She won’t quit until he joins her in the pursuit of revenge.

What else will this week bring? Well it looks like Donny is questioning Jesse’s new power. Losing his boss, and mentor, has to weigh on him he’ll do anything to get him off of Jesse’s side. Eugene finds himself in a bit of trouble this week as someone assaults his car while screaming “murder”. That’s one story I’m looking forward to expanding. We already know that his face was caused by a suicide attempt but what was it that spurred that? I’ve found Eugene to be completely sympathetic and am hoping that something good comes his way.

There you have it Geeklings! Be sure to check out Preacher tonight as a palate cleanser to what I’m sure is going to be a brutal finale to Game of Thrones. Although I have to admit suggesting Preacher as a happier alternative is a bit disconcerting. Happy viewing all around!

Images and Trailer from AMC