I think the most frustrating aspect of season two of Preacher is the inconsistency. Things started off so strong and promising with our band of heroes unaware and oblivious to any of their future problems. Just a vampire, a sort of preacher with a space demon super power, and a criminal road tripping to find God. There were no hints of love triangles, lost souls, or mortality dilemmas. Nope. Just three friends on the road being hunted by a cowboy from Hell. Which on any other show would seem weird but on Preacher it might not be weird enough. After those explosive first couple of episodes the season kind of dipped in quality with flashbacks and wheel spinning only to jump back into the awesome category with episodes centered around the villains. Following that though quality again took a nose dive, to what I would say is one of the show’s worst episodes, only to spike again with last night’s episode. At this point, there’s no telling what you’re going to get when you turn on Preacher outside of a story that’s weird and disturbing to the point where you’re wondering how certain scenes got approved for AMC.

That’s where the consistent nature of the show lies, in its ability to present the weird in a normal light while also making you feel super uncomfortable. As a television writer, I find myself often thinking just how the hell am I going to spin some of the content in my reviews. Killer cowboys from Hell are easy to write about when compared to attempts of humanizing Hitler and a villain who likes to act out rape fantasies with prostitutes. I often debate what is important for the characters and the story at hand and what can be quietly acknowledged as uncomfortable. With Preacher those lines aren’t always so clear which is part of the beauty of the show, but man does it make it tough for me to come here sometimes. 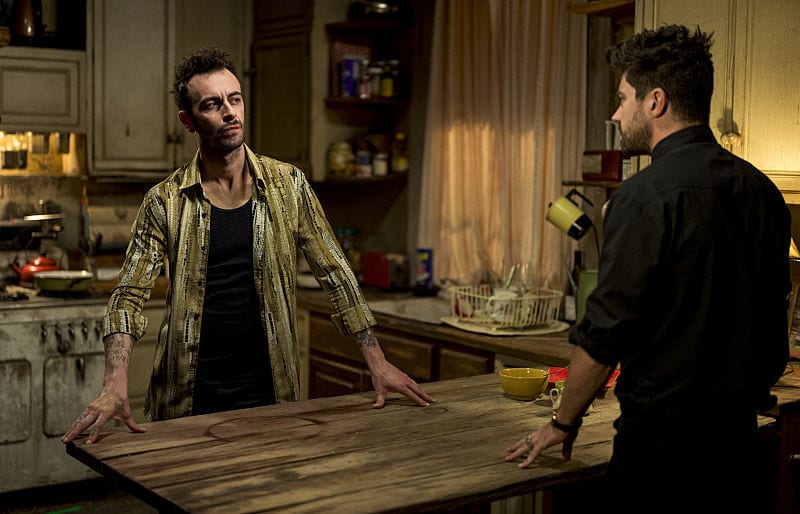 Let’s take last night’s episode, which falls into the very good column of season two, where things have more or less completely fallen apart for our heroes… heroes? That seems like a pretty generous word, but I digress. Tulip is refusing to sleep because the Saint of Killers haunts her dreams (can’t sleep SoK will eat me, can’t sleep SoK will eat me, can’t sleep…) so she buries herself in physical pain to take her mind off of the emotional aspect. Cassidy has been wrestling with his love for Tulip, his recognition that Jesse doesn’t appreciate her or him for that matter, and his dying son wanting to become a vampire to cheat death. Jesse seems like he’s kind of given up at this point. All his avenues have been exhausted and now he’s lazily searching You Tube in the hopes that he’ll see a video of the whereabouts of God.

All of these character dilemmas have made for a perfect storm as everyone sort of hates everyone at this point. Cassidy hates Jesse for not caring about Tulip or his father issues. Tulip hates Jesse for not being on time to save her life. Jesse hates himself for giving up part of his soul in what seems to be a hopeless search for God. Tensions are high so the attack from the Grail to start the episode was a fantastic play. Instead of bringing everyone together it left things unchanged as the group defeated the Swat team, through the use of the space demon voice, and just when they were about to get some answers Denis ripped out the throat of the only survivor because he was hungry. That’s right, Cassidy turned him. Now enter new waves of resentment. Joy!

Jesse becomes convinced that the Grail is going to attack again and space demons himself a team of local police offers to stand watch. Not a bad plan but the Grail doesn’t choose traditional forms of attack as they had planned on using a missile named Brad to blow these three problems up. Hard to use a space demon voice on a missile you don’t know is coming, but Herr Starr has a last minute change of mind during an alternate take on one of his super bizarre/uncomfortable fantasies. Sorry, Harry Connick Jr. 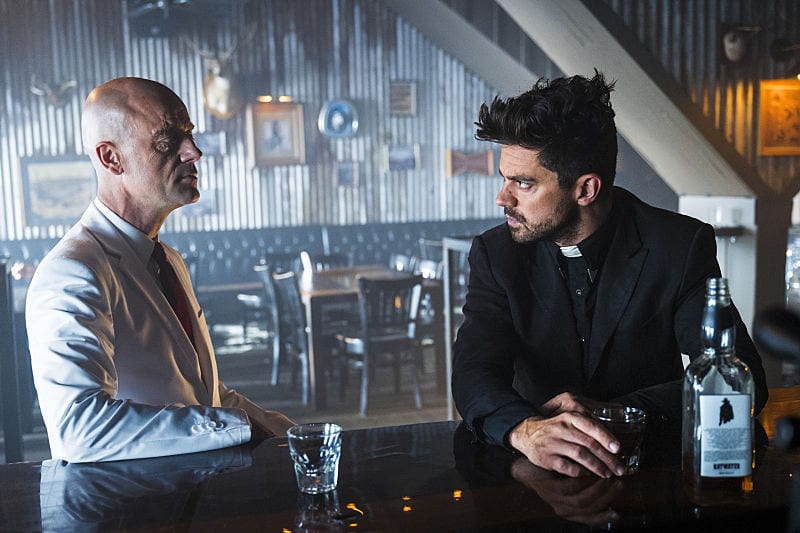 The trio survive the attack they didn’t know was coming and remain as shattered and separated as ever. Nothing has been resolved, and if anything, the group is slipping further and further into their own personal hells or madness. Tulip now has a gun and shoots cleaning crews because she’s hallucinating. Cassidy is trying to teach his son how to be a proper vampire to mixed results. Jesse is… he’s kind of gone at this point. It’s a good thing that Herr Starr changes the Grail’s strategy and finds our preacher in a bar. I’m sure the two of them will have plenty to talk about.

There you have it Geeklings, Preacher attempted to right the track this week with another very strong episode. Granted, the plot hasn’t really advanced much as the search for God seems dead in the water, it did give us some terrific character moments in the madness they’re creating. What did you think? Are Jesse, Tulip, and Cassidy too far gone to reconcile? Will Denis the vampire be a liability? What is your take on Herr Starr? Sound off in the comments below. If you’d like to continue the Preacher discussion you can find me on Twitter @iamgeek32. In the mean time, I’ll see you guys next week!