One of Preacher’s biggest charms is the fact that it does not ignore how strange the content of the show is. In fact, it just plays it off as if it’s all normal behavior and that helps almost rationalize it. Feeding a bunch of dogs to a dying vampire? Sure, I can buy that. Angels dying and respawning immediately after? Yeah, that’s not a problem. A demon voice from out of space that blows up Tom Cruise and gives a preacher super voice powers? I’m listening. Hitler’s in Hell but sort of uncomfortably nice? … that one still bothers me. The point is Preacher embraces it’s weird and last night’s introduction of soul harvesting fit right in with what we’ve grown to love about this show. 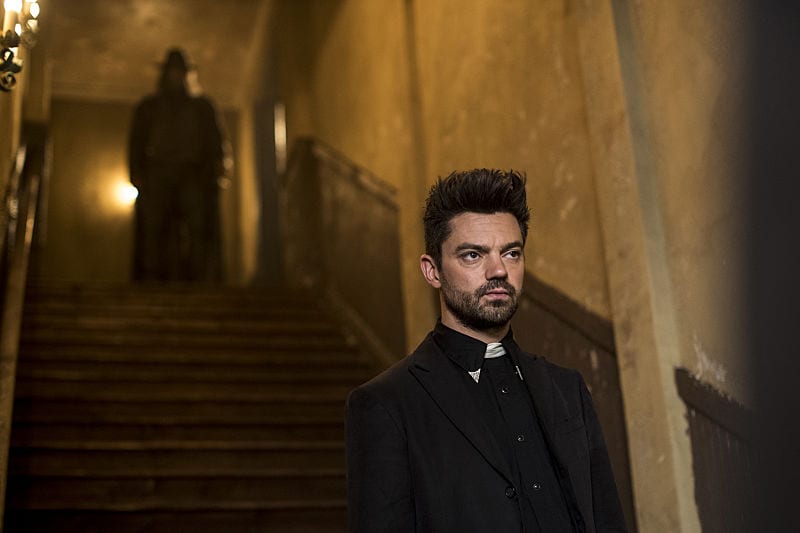 I’ve found that season two of Preacher has been at its best when the Saint of Killers is an active participant and last night saw him come to the forefront again after a couple of episodes of lingering in the background. Dude’s a slow walker. After weeks of ignoring Fiore’s advice of not using the demon GPS voice, the Saint of Killers finally found Jesse and gang and it wasn’t the immediate blood bath one might expect. In fact, Jesse was able to prey on the Saint’s human side (yes he still sort of has one) and strike a deal that would end up with everyone alive and the Saint of Killers in Heaven with his family. The excellent Saint of Killer research scene unlocked a number of his secrets such as his lack of soul and his rejection from Heaven while using artwork from the comic (nice touch!). In order for this deal to be struck the Saint of Killer would need a soul, and he reasonably gave Jesse an hour to find it while he held Tulip, Cassidy, and Cassidy’s son (whaaaaat?!) hostage.

The episode opened with the apparently very lucrative business of soul harvesting, which is something Jesse already knew something about. He immediately heads to one of New Orlean’s local voodoo shops looking for a soul to buy and striking out because soul harvesting has gone corporate. I hate when the little guy gets pushed out of town by the bigger corporations. Needless to say, Jesse has to hijack a soul from an armored car, yes really, and finds that souls are like blood… they have to be compatible. With the clock closing in on the hour deadline Jesse discovers his soul is compatible with the Saint of Killers, because duh, and gives up 1 % of it before rushing home to deliver the goods so his friends won’t be killed.

This is where we come to learn why the demon voice doesn’t work on the Saint of Killers because the dude’s got no soul, but as soon as he ingests that 1% of Jesses, well, it’s on. Jesse quickly uses the voice to his advantage disarming the Saint and making him bend the knee while taunting him with the fact that he’ll never get to Heaven to see his family. The Saint dares Jesse to send him back to Hell with his soul and Jesse has some second thoughts. Personally, I wouldn’t want to send any part of my soul to Hell. Even if it is just 1%. Jesse chooses to lock him in an armored van and sinks him in the swamps of New Orleans instead. I’m not entirely sure if this prevents the Saint from dying or from going to hell but it definitely was a solution of some sorts. The episode ends with Jesse burying the Saint of Killers guns in the floor boards as we’re supposed to feel victorious, but I was left slightly disappointed that the Saint of Killers has been cast away. At least for now. I wonder if the fact that he has a soul now, no matter how small, will affect his behavior as the season unfolds. Does this mean he can feel? Like, anything?

Other things that happened this episode that were slightly important. We started to see the first chinks in the armor of the Jesse/Tulip/Cassidy triangle as Tulip and Cassidy were a bit flirty this week with their pancakes and inside jokes. Cassidy looked for an apology from Jesse and didn’t get one. Aaaaaaaand don’t forget the big one, Cassidy sacrificed his hands to save Tulip from the Saint of Killers sword. I fully expect this situation to become implosive sooner rather than later. Last week taught us that Tulip and Jesse are not good for each other but there’s no way we can live in a world where Tulip shifts over to Cassidy without there being some ramifications. We’ve already seen that Jesse is willing to let Cassidy burn, what would he do if Cassidy took his girl from him?

There you have it Geeklings. The universe of Preacher continues to delve deeper into the strange and the Saint of Killers currently resides at the bottom of a New Orleans swamp. What did you think of last night’s episode? Are you happy that the gang moved past the Saint of Killers or do you suspect that he’s not done with them yet? How much longer before the Jesse/Tulip/Cassidy triangle implodes? Sound off in the comments below. As always if you’d like to talk Preacher you can find me on Twitter @iamgeek32. I’m always up for a good discussion with my peeps. See everyone next week!