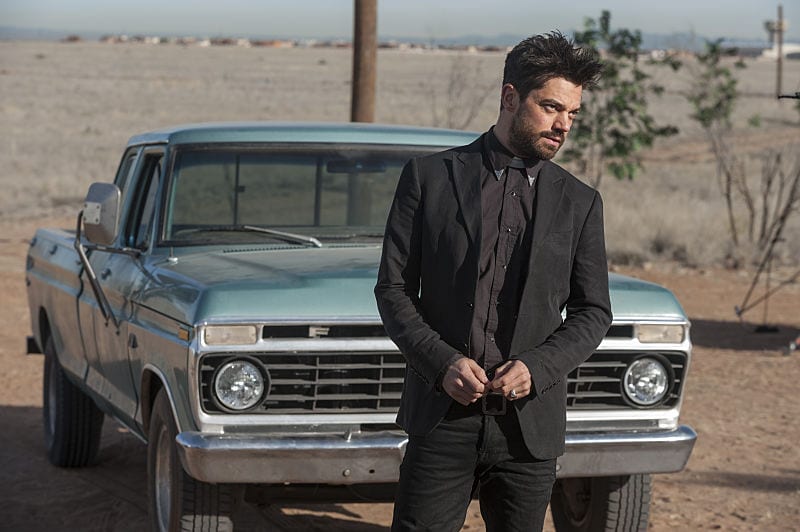 When I pictured how Preacher would open, I have to say space demon that makes people explode wasn’t even on my list (but an alternate timeline Howard Stark might have been…), but I’m so glad that’s the way Seth Rogen and Evan Goldberg chose to go. Our space demon helped break the tension that comes with the opening minutes of a new show that you’ve been anticipating for what seems like ages. Will it be good? Will it live up to my expectations? Oh, God are they going to ruin the comic? Wait! Did that guy just explode?! When that preacher got up and just turned into a one man Gallagher show I exclaimed an expletive (it rhymes with “oh spit”) and was drawn in immediately after. Nothing like exploding people to help break the tension and ease your nerves.

Once the tension was broken, Preacher eased into delivering quite the excellent premiere episode. One can tell that the show is pretty ambitious with the themes it hopes to cover as ideas of absolution, being able to change who you are, redemption, and guilt seem to be heavily present.  In order for these themes to resonate you need good characters, and Preacher has provided a number of characters worthy of your cares. There are a number of characters that suck you in whether it’s based on the glimpses of their back story (Tulip), the fact that they’re a vampire (Cassidy), or because some sort of terrible accident has ruined their face (Eugene/Arseface). Yet there is no one more polarizing then our preacher, Jesse.

When we first meet Jesse he is waking up late for mass, most likely hungover (any one notice his bullet wound scar?) and proceeds to give the most uninspired gospel I’ve ever heard. From all my experience with church I’ve never seen a priest/preacher read their sermon from sheets of paper, that stuff is supposed to flow out the heart. You’re supposed to be so impassioned about what you’re saying that it’s pouring out of you and contagiously spreading to your congregation. What we have with Jesse was a preacher who seemed lost, filled with a room of people who probably thought the lack of air condition was God’s way of punishing them for their sins. Jesse had no command of the alter and no enthusiasm. He was just a man going through the motions which I figure is a rough way to be if you’re a preacher.

Jesse’s lack of passion was something that was persistent throughout the entire episode, and the only times you saw a fire in his eyes is when he was either speaking about acts of violence or committing them. The very notion of physical altercations (something that I feel is a heavy part of his past) were the only things that made Jesse seem alive, and not like this small Texas town had swallowed his soul and left him in a ditch to whither away. 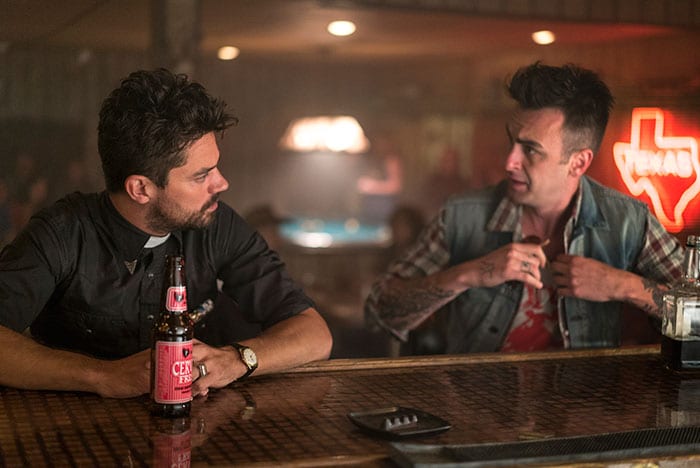 The establishing of the town was another thing that Preacher did well as it gave us a strong sense of community through it’s sweeping landscape shots as well as the interactions with minor characters. Jesse’s talk with the sheriff (who doesn’t mind if you drink in your car but does mind if you start to act a fool) and his visit to Donnie’s wife (who claims to be in to a little rough housing but I ain’t buying that) helped to not only establish the preacher’s role in the town but continued to show how “bleh” Jesse is about his existence and his role within the community. And when you think that he’s motivated by guilt of broken promises, it’s no wonder that he makes such a crappy preacher.

Flashbacks show us some of Jesse’s father (who also was a preacher), right before he is seemingly executed in front of a younger Jesse, and a promise made that was eventually broken, the first steps down Jesse’s doomed path. Jesse needs to be absolved of his sins, and he is clearly not there to be a preacher for the people, he’s there to save his own soul. It’s not until Tulip arrives in town (P.S. she was all types of awesome… we’ll get to her though I promise) that we see Jesse is running away from his own demons. While Tulip tells him he can’t change who he is (I was reminded of Adrian in Rocky IV), Jesse ignores the temptation of another “job” and ignores who he is at his core.

Clearly he’s trying to be a person that he’s not or he has no grasp on how to be the person he needs to be. He’s a lost man of God who finds himself in a bar with a vampire, and after speaking some true grit dialogue, seems vibrant for the first time as he breaks the arm of a wife/child beater. That type of preacher, the gunslinger mentality kind, would be a big sell in church I think.

The community is begging for Jesse to be the man of God they need, but he’s too busy swearing at God because he doesn’t get answers to his prayers. After claiming to step down as preacher, Jesse goes into the church one more time in the hopes that God could give him the answers that he needs to move on with his life. That God can absolve him from what’s clearly tearing him apart inside. What God does is allow our space demon (remember that thing), who has been quite busy blowing up a goat worshiper in Russia and Tom Cruise, to enter the church and Jesse, who doesn’t explode. Our space demon has found a friend, and leads to Jesse giving his first impassioned sermon, probably ever, as he promises his congregation that he’ll be the preacher they deserve. I worry that Jesse will see this space demon as an act of God but, and this could just be me, I don’t think God would be sending things from space that make people explode. It sounds so… old testament. 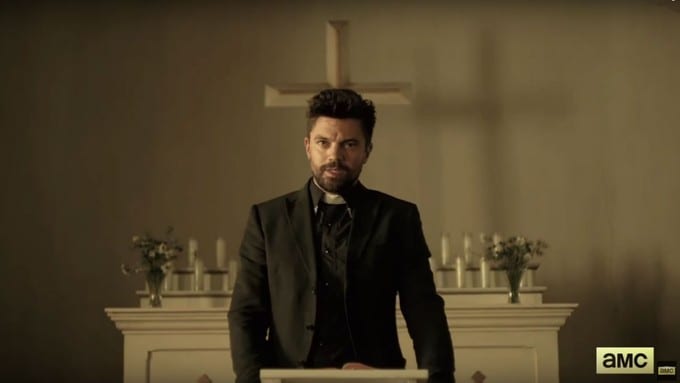 There you have it Geeklings. Preacher finally has arrived and it seems to have made good on all the anticipation. My only compliant, and this is mostly towards AMC, is why would you air this episode only to take a week off before airing the next? I know it’s a holiday weekend but it seems that the show would have been better suited to build off of the momentum established here. I hope that the week off doesn’t come with a large drop in viewers.

By all means sound off in the comments and let me know what you guys thought. Did Preacher live up to your expectations? Are you excited for more? Or did it stray too much from the comic for your liking? The comments are yours Geeklings.