I just want to preface this review by picking up from yesterdays theory where I said the grizzled cowboy in the flashbacks was God. Needless to say after last nights episode I was more than a little wrong (you think?), but I was also maybe, kinda, sort of right. Don’t worry I’ll explain, I’ll explain. Just keep reading as a lot of things happened last night and a lot of those things were dark and full of terrors (well mostly just dark. Like really dark). 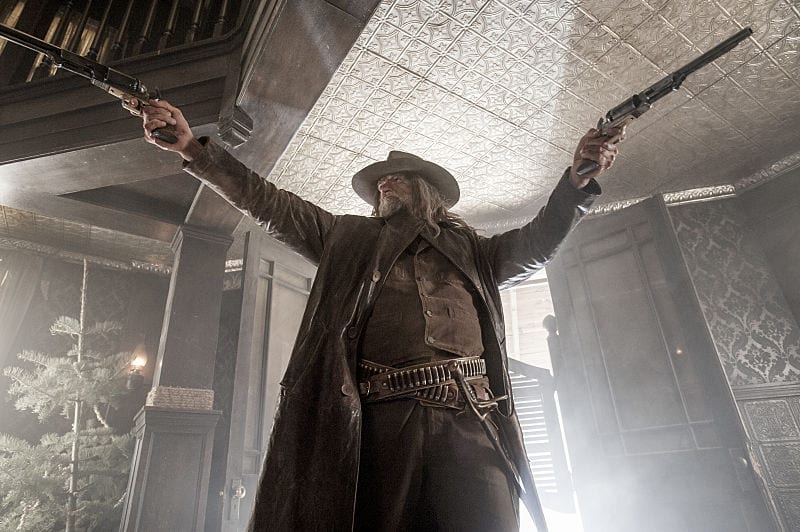 Let’s start out with the biggest reveal, the flashbacks are not entirely flashbacks but the grizzled cowboys version of hell (which in turn is a flashback to his life which seems to take place around the Civil War). I know jaw dropping emoji here, right? I kept waiting for this cowboy to show up in the present time line, even believed that he was the one who got Tulip’s map (wrong again Kevin), but now we’ve discovered his importance. He’s a stone cold killer. As the rest of his story played out and he killed, everyone, in ruthless, violent fashion. I honestly thought he was going to let the singer live for a minute… wrong. I think he might have gotten it the worst.

We learn at the end of the episode that our cowboy has been living this scenario, where he goes to get his daughter medicine, gets beaten up, returns home to discover his family dead, and returns to the bar to get his revenge, more or less forever. I know it’s not really forever but you tell him that. Now, do you think that he wakes up each time knowing what’s going to happen or does he go into each time thinking it’s the first time? I guess that depends on what you believe Hell is. Is it keeping that pain each and every time or is experiencing it for the first time every time worse? Either way it sounds like a super sucky way to spend eternity and definitely reeks with vibes from Stephen King’s Dark Tower series (*shameless self plug* be sure to check out my Dark Tower column here).

DeBlanc and Fiore, who were pretty defeated after losing Genesis to Jesse, are looking to skip town, and do what any rational agents of Heaven would do in this situation… book a trip to Hell. I thought that scene was awkwardly terrific in it’s humor as was the coin flip to decide if they would go to Heaven or Hell. Heaven wins out but since they have no phone to call ahead (more on that in a moment), Hell is the place. How heart breaking was it when they learned they couldn’t bring carry-ons on the Hell bus? “What about my comics” kind of broke my heart. All this brings in an interesting plot twist as I thought the two of them were going to Hell to retrieve Eugene. In case you haven’t picked up on the trend, I was wrong with that too. Turns out they were there to recruit the cowboy because they need him to kill a preacher. We know a preacher… wait?! 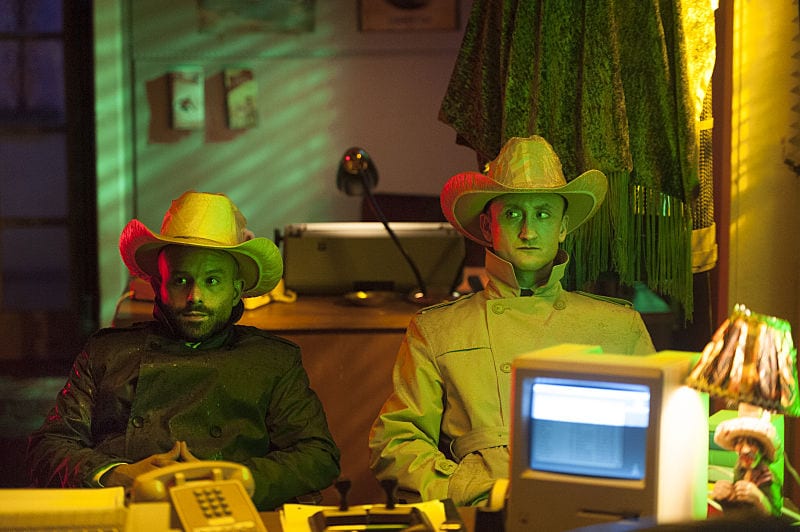 Side Thought: If this is the cowboys version of Hell, what do you think Eugene’s is? And is anyone else out there feeling terrible for this kid yet? I don’t think he’s mentally strong enough to live through his own personal hell over and over again, not to mention what’s it going to do to him if he ever gets top side again?  I also want to circle back to my theory from yesterdays preview real quick. So Jesse calls out God and it looks like he’s about to no show. In walk DeBlanc and Fiore with the cowboy, and everyone in the town instantly believes that this is God walking into their church. That is until he starts shooting up the place. So if you think about it Geeklings, I was sort of right. Rightish? In the ballpark? Give me something here.

Speaking of our preacher, Jesse certainly rode the train to humble town this week as he had to make amends with Tulip and Cassidy. Tulip went to Albuquerque to kill a man (helloooooo Carlos!!!) so she got the sentimental voice mail treatment. It was Cassidy who got the face to face here in what was another terrific scene. I’ll tell you something Geeklings, Joseph Gilgun continues to eat up every scene he’s in and has amazing chemistry with just about every cast member. I loved watching him wanting to be mad with Jesse but couldn’t find it in his heart to commit to it. And that’s because Jesse put him out. Granted, yes he let him burn, but after a bit he used the fire extinguisher and put out those flames. That has to count for something according to Cassidy and now we just have to wait for their impending shag (which was a great line). 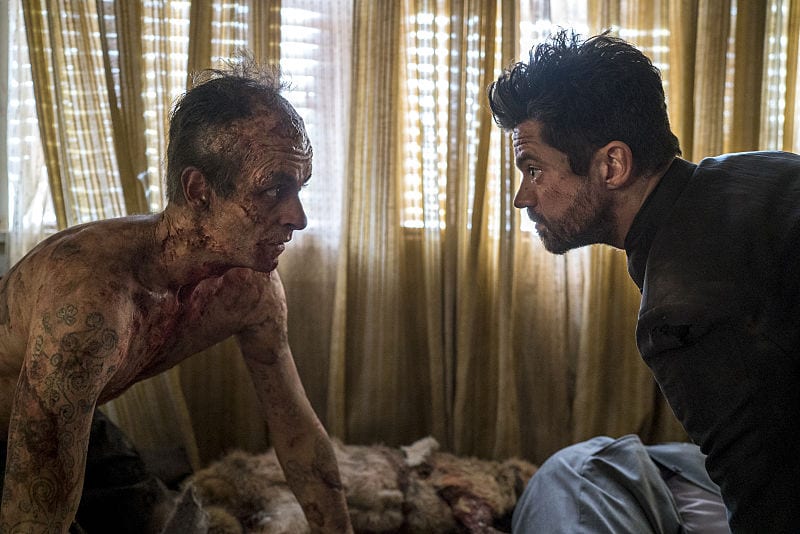 We also learned that Cassidy stole the Heaven phone from DeBlanc and Fiore and now has a direct line to the big guy himself which should make the invite to church a lot easier. After digging up one of DeBlanc or Fiore’s hands (cause the Heaven phone don’t work without angel hands. Duh you guys. Duh) God is literally a phone call away.”Hi this is Jesse and I’d like God to come down to church on Sunday. I have this super power that makes people do what I say and I’d like to see if it works on Him.” I’m sure God will come running to that sermon. I think he should just make the call to get Eugene back. That’s just me though.

A couple of parting thoughts before I go. This week saw two characters who have been presumably pretty by the book people (minus one little white lie here and I wish you were dead there) go to real dark places. Let’s start with Emily because I thought this was the one that had the most impact as she fed her “boyfriend”, the Mayor, to Cassidy. This kind of came out of left field for me, but  I get it. Emily wants to be with Jesse and feels that he’ll never pay attention to her unless she’s like Tulip. How does one get like Tulip? Well I’m not entirely sure but feeding the Mayor to a vampire probably is a step in the right direction. This action brings up a number of issues I expect to be important later on. For starters, with the Mayor gone does this give Odin (the host of office fight club) the window he needs to seize full control of the town? Like he doesn’t already have it. Follow that up with do you think Emily can live with herself for doing this? It’s clear that she never really respected the Mayor, she just wanted to get her rocks off, but sacrificing a man to a vampire is a big deal. Especially when the worst thing we’ve seen her do is lie. I worry about her.

The final parting thought concerns the sheriff and his killing of the angel in the bathtub. Man, that was heavy. First let’s put into account how DeBlanc and Fiore had this angel hitwoman sitting in that bathtub for awhile and that’s a special kind of darkness, then think about the angel asking the human to kill her. Yes, I know it’s so she could regenerate but the sheriff doesn’t know that. The sheriff goes through with it  and clearly has some stuff to work through (hello inner turmoil). You would think as an angel she would come in the bathroom and say “thanks” and help put him at ease. Nope. She watches the sheriff continue to choke her dead body, which must be super existential,  and then bounces out letting the sheriff deal with whatever he’s processing. That’s one cold ass angel.

There you have it guys. The table is set for next weeks finale. What do you think is going to go down? Will Jesse be able to speak with God? Has Tulip already killed Carlos? Will the cowboy kill Jesse? Will Eugene ever escape Hell? Sound off in the comments below.