Only two episodes left of the first season of Preacher and they are shaping up to be real interesting. For starters let’s look at Jesse, I mean, he is the character the show is named after. Why wouldn’t we start there? Jesse is in a position we have yet to experience in this narrative. He has nothing. Nothing at all. His church is gone. His faith, hanging on by a thread. His sanity, fading with each conversation with Eugene. And what is his big plan? To hold one last sermon, before Odin claims the church, call out God, and if he doesn’t show up then denounce him in front of the entire town. As far as endgames go that’s pretty heavy. Yet, I have about how this is going to play out. Well two. I have two theories.

Let me start with the easier to accept theory (or Theory A) where Jesse gives his sermon, God no shows, and he now has to denounce the big guy in front of the entire town. Think about this. Genesis is the result of breeding between good and evil so one could imagine that it possess both of those qualities, but it’s up to who it’s chosen to inhabit to figure out which. You can either choose to use those powers for good and be a good person or choose those powers for your own selfish purposes (which is what Jesse has been doing pretty much all season). We also know that Genesis has a serious boy crush on Jesse and will refuse to leave him. Now, Jesse calls out God, and nothing. What is stopping Jesse from using Genesis and his super voice to make the entire town denounce God as well? Could you imagine that? A preacher… using his spiritual super power… to tell his flock to denounce the one thing they’re all supposed to believe in. Damn. That’s some heavy stuff right there. This would also be Jesse’s Darth Vader moment as he gives in to the dark side and is consumed by Genesis’s evil powers.

Then there is the more out there theory (or Theory N… I said it was way out there). We can tell by the trailer that our cowboy will be making another appearance in this episode. I’ve said all along that I believe the map Tulip stole was given to him in the movie theater. What if this… what if this grizzled, non talking cowboy is God?!?! There has to be a way for this guy to fit into the larger narrative and wouldn’t it be crazy town banana pants to find out that this is God?! Picture Jesse calling out God at mass and suddenly the doors bust open and in walks this dude. Ho. Ly. Crap. That would be insane. If you’re looking for proof on this theory I don’t really have any. The chances of him being God are slim and none but I’m just trying to come up with some sort of idea of how he fits in this story. This is what I’m working with right now. 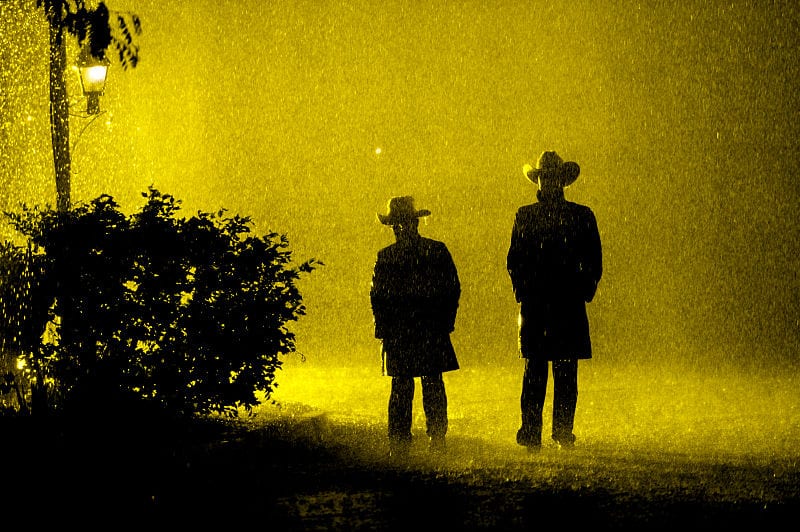 Elsewhere we know Jesse let Cassidy burn (D move Jesse), Tulip fed him a dog (D move Tulip), and Cassidy is more than likely going to be super pissed with Jesse. As a matter of fact, Tulip is super pissed at Jesse. The two of them could forge a super group looking to take their frustrations out on the preacher, but not sure if I’m buying that. I suspect with Jesse having nothing to lose that he’ll be forced to mend those bridges. That scene with Cassidy should be intense, and slightly hilarious. Now I wonder if they’ll be able to bring Emily over to their outlaw band or if she’ll volunteer and be turned away. Her love for Jesse lacks true understanding of what he is and I worry that that could lead her to making a poor decision.

And can we start a campaign to get Eugene freed from hell? That poor kid. I don’t know if I truly trust our agents from Heaven to get him out of there. It seems like last week they were too defeated about the Genesis thing and doing that walk of shame back to Heaven, which is also a sentence I never expected to write. Ever.

There you have it Geeklings. The end game starts tonight. What do you think of my theories? Super crazy or sort of plausible? Sound off with anything you’re thinking in the comments below. Happy viewing!