As we approach the finish line of season one, Preacher seems focused to save it’s best episodes for last. The build up of the first season may have seemed a bit slow at first but as we go into the final two episodes things are steam rolling out of control, and rather quickly. While last night may not have been the ridiculous blood battle like the airplane and hotel room (well minus the poor fella who had his… something valuable shot off) but it didn’t lack on violence, and saw Jesse get out smarted by a very unlikely source.

We started off with a flashback that showed us how all of Odin’s family died. Like… all of them. I didn’t understand the flashback at first but once those coffins were in Odin’s office it all came together rather quickly. As a side note I would also like to add that this is the exact reason why Kevin doesn’t go skiing. For starters I’m scared of heights but I have this irrational fear that the lift (or in this case snow elevator) is going to break or just fall apart. There’s no coming back from that for me and and thanks to the movie Frozen (not that one… the one with Iceman from the X-Men movies) and this scene I probably will never even attempt to ski. Truth be told I’m not even mad about it. But this is all besides the point because the death of Odin’s family gave us a glimpse of what was going on in his office when Jesse’s dad went to visit. I’ll tell you it was nothing good as Odin ripped apart a cow (this is why we don’t have office cows anymore) and his daughter’s insides to see if there was a difference. There wasn’t. Clearly Odin had gone off the deep end. 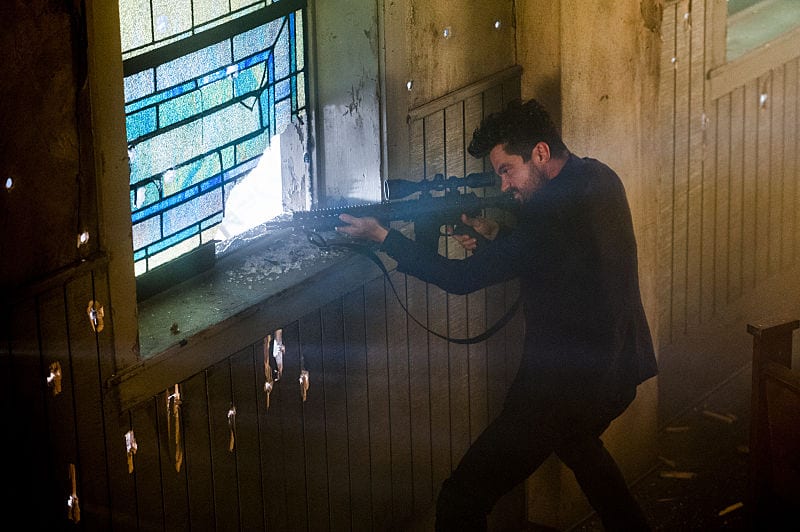 The assault on the church was interesting but before it could happen Jesse prayed to God (the killer of fathers and the supplier of space demons) and asked for the return of Eugene. And surprisingly God provided. Jesse went to the hole in the church (which sounds like a heavy religious metaphor but I really just mean the hole in the church floor) and dug Eugene up. I want to give full credit to the Preacher make up team here because Eugene looked terrific covered in dirt and scorched skin. The kid looked dehydrated which added to how terrible the experience was for him, and it was perfect. He also provided the best line of the night when asked if he just dug himself out of hell when he said “it’s not that far”. That gave me the goosebumps.

We had to know that this wasn’t really Eugene though. It was too easy (plus the trailer had Jesse asking Fiore and DeBlanc for help) and it was quickly discovered that this version of Eugene was just a manifestation of Jesse’s guilt. Our Eugene is still burning down there. Ugh, my heart breaks for this kid, and yes I know what he did was awful but he is the only character on the show who really seems like he’s seeking absolution for his sins and is willing to suffer because of it. There’s a nobility there that none of the other characters are showing, and let’s just be honest, there’s just something sweet and broken about Eugene. Like I want to read comic books with him and tell him he’s a cool kid.

After the first failed assault on the church, Jesse just kicks everybody’s ass and asks to see the agents, Fiore and DeBlanc show up and tell him there is a way to retrieve someone from hell but they want Genesis. Enter a little deep voice singing and a coffee can and poof, Genesis is going home. Although Fiore and DeBlanc aren’t returning Eugene above ground. Apparently there are channels and they’ll be sure to mention it. I thought that was kind of crappy (please see above paragraph for reasons why) and so did Genesis as it busted it’s way out of the coffee can and right back to the preacher. There is a serious bond between the two of them, and while it’s not all evil, it’s not all good either. At this point what is Jesse without Genesis besides a broken man who has no real faith? Genesis at least gives him a purpose, even if it is for all the wrong reasons. Fiore and DeBlanc don’t seem to agree and leave the church leaving the impression that it might be chainsaw time or more than likely time to give up as Genesis no longer has a cage. Who do they turn to next? There’s no way they’re leaving that angel/demon spawn on earth with Jesse. Is it time to call in the big guns? 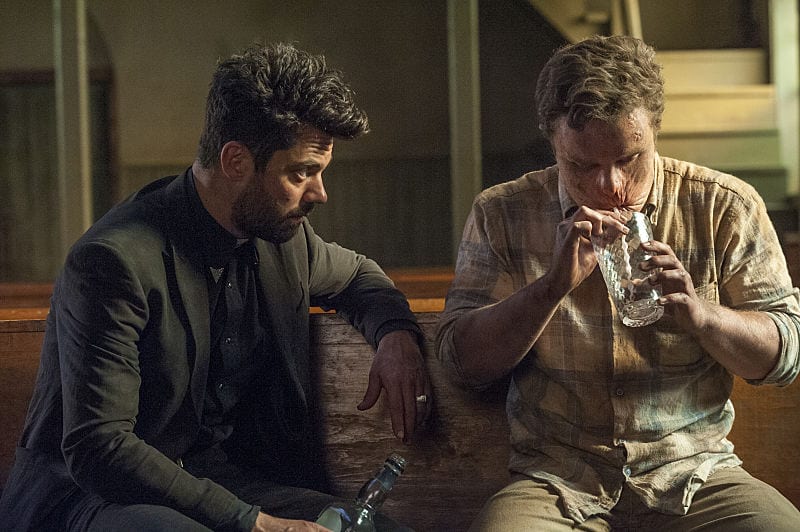 While Odin orchestrates another attack on the church Donny (everyone’s favorite douche nugget) sneaks into the church and holds Jesse at gun point. While Jesse tries to use super voice, it has no effect on Donny, as he’s given himself tinnitus (“MAWP”… yes that’s an Archer reference) by putting his head in the trunk of his car and shooting off his gun. Pretty clever. Donny knows first hand about the power of Jesse’s super voice and completely outsmarts him. Not a bad move and will probably get him in the good graces of Odin who then takes control of the church forcing Jesse to sign the transfer papers. Not without Jesse saying he wants one more week to give a final sermon where he’ll call God out and if he doesn’t show he’ll denounce him.

This actually proposes an interesting scenario Geeklings. With everything that has happened to him this season, Jesse now knows that there is in fact a God. That he exists and that he’s watching as things transpire. Well maybe not everything as it took him awhile to realize that the worlds most powerful child was missing from it’s coffee can, but hey, who am I to judge? So now Jesse has this huge sermon where he calls God out and if he doesn’t show… well it’s just proof to Jesse that God could care less about him. Which in turn could cause him to use super voice to make the rest of the town denounce him as well. This becomes a very tricky situation next week as it seems that this sermon will dictate the course of Jesse’s soul with Genesis. Should be very interesting.

The episode ends with Jesse getting arrested and I’m not really entirely sure for what. Could it be for shooting that guys something valuable off or maybe the anti-assault on Odin’s men? But that seems like a double standard since nothing happens to Odin. Further proof that he runs this town. It could also be for Jesse telling the sheriff that Eugene was in the church when he wasn’t really. That was left a little cloudy. 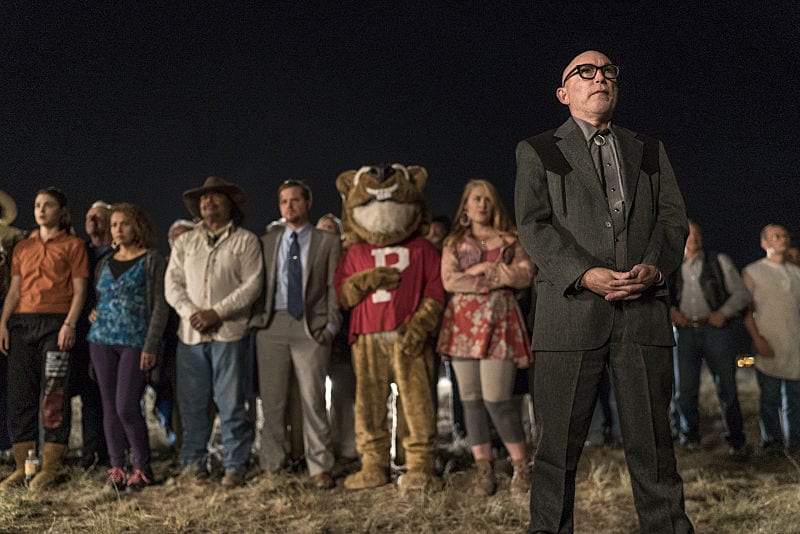 There was another story line coursed throughout the episode but I’m only going to touch on it briefly because I’m not a big fan of when shows present us animals to fall in love with only to feed them to dying vampires. The most important thing to take away from the dog sacrifice is that Jesse indeed let Cassidy burn. Could this re-kindle the “romance” between Tulip and Cassidy or could this be the start of a war between Jesse and Tulip/Cassidy. Lots of moving parts going into the last two episodes.

What did you think Geeklings? Preacher keeps ramping it up as we head towards the finale. What did you guys think? Feel free to drop your comments in the… comments section below.