Something tells me that we’re in for a pretty solid hour of television with tonight’s episode of Preacher. Call it a hunch or call it simple mathematics after watching the above trailer but this week has the recipe for awesome. Seriously, who among you didn’t see those men dressed up in Civil War garb and go “yasssss!”? Let’s do this!

Last week Jesse was a big bag of d’s. Like, totally. It was the first episode since the show started where he came across completely unlikable. We also learned what is driving Jesse to “save” this town as he feels responsible for his fathers death. I guess that comes with the territory when you ask the big guy upstairs to kill your dad. Eeeeep hard to take that one back. But Jesse has been shouldering that guilt all his life and now with the help of Genesis he has his (alteration!) chance to fulfill his promise and move on with his life. The only questions left now are who will save him and at what cost?

Enter Fiore and DeBlanc, who took the week off last week most likely to nurse their wounds, to come and reclaim Genesis. It seems that it’s escape has started a bit of a war between them and Heaven and the quicker they get Genesis back the quicker they can return to Heaven. I think. Not really sure what the end game is for these two. At the very end of last weeks episode, Jesse finally gave in to the overwhelming feelings of guilt about sending Eugene to hell and started digging up the boards of the church as if he could dig there. It’s an old wives tale Geeklings. No matter how much you dig you will not be able to dig to hell. Also why would you want to dig there? There are so many other/better locations to dig to. Like China.

Fiore and DeBlanc seem willing to help Jesse return Eugene to the land of the living but not without Genesis. You would think after last week Jesse would have little qualms in giving up the space demon. There is the little problem of Odin and his army of Civil War soldiers storming the church but one ridiculous problem at a time. There is potential for a blood bath in tonight’s episode and if Preacher has shown us anything during it’s first season it’s that it can supply a good blood bath (please see the airplane fight and the hotel rumble respectively).

Elsewhere the fate of Cassidy is kind of up in the air. When we last left our favorite vampire he had walked into the sun in the hopes that Jesse wouldn’t let him burn. I’m standing by the fact that Jesse put out the flames but didn’t welcome Cassidy back. I say just feed him a cow and see what happens. I would be very surprised if that’s how Cass meets his fate. 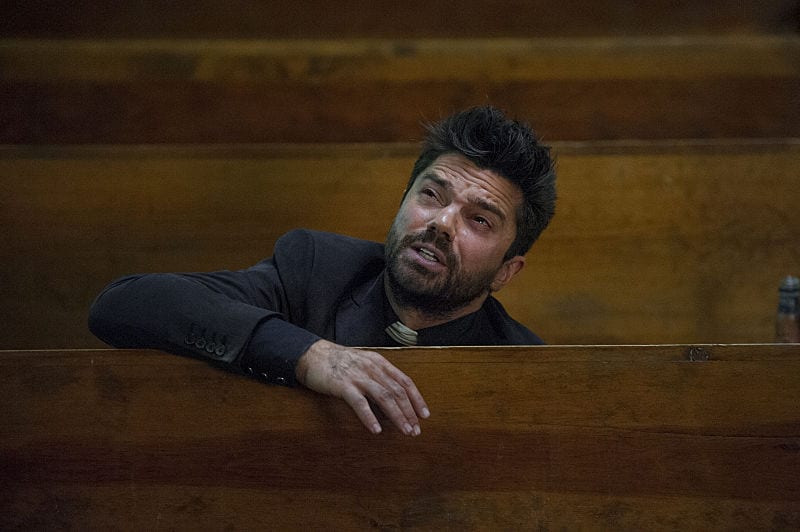 Emily and Tulip both felt the wrath of Jesse last week and walked away from dinner with a bad taste in their mouths (could that have been the vanilla extract?). I know Tulip will recover because she’s got that steel in her but I worry about Emily who is clearly a bit smitten with Jesse. Maybe it’s the bad boy routine or maybe it’s because of his “want” to save the town but my girl has got eyes for our preacher. With Fior and DeBlanc helping with the Eugene situation and Odin storming the church I find it very unlikely that she’ll get the apology she deserves this week. But who knows? She’s already showed that she’s capable of lying for Jesse maybe she’ll grab an assault weapon and go to war with him. She’s a mother though so I would suggest she didn’t do that.

There you have it Geeklings! There are only three episodes left in the season and tonight certainly looks like it could be a doozy. Happy viewing and by all means please use the comments section for any thoughts you may have. I’m all ears (or in this case eyes… I’m all eyes) like this little theory I’m going to throw at you real quick… Jesse loses Genesis buuuuuuut it ends up in Odin (insert menacing music here). Right?! What a great way to end the column. See you all tomorrow with the episode review and maybe to brag about my awesome theory or if wrong to completely ignore it.