What. The. Eff. Just. Happened.

For serious. There are a lot of things that can be said about the first season of Preacher, and some of them are good and some of them are less than good (I didn’t want to say bad). For starters the show took a little bit to catch a rhytm which is something that happens often with shows in their first year especially when those shows are based off of popular cult comics. Think about it? How many of you actually go back and watch the first season of The Walking Dead? Granted, there are strong points but it took a little time for the show to find it’s voice and this was an especially longer process for fans of the comics. Seriously, why did these characters go to the CDD and a mostly useless story line that brought us an ear whisper (is that the correct letter combo? See! That’s how much I don’t think of the first season). I guess the same can be said here about Preacher (even though I haven’t read the comic… yet. And I’ll touch more on that in a bit). I would say it was about episode five or six where the show started to find it’s voice and from there on out it improved on a weekly basis, and this lead us to a finale filled with Preacher like violence, humor, and weirdness that only this show is capable of providing without it seeming like too much.

For starters let’s talk about the big WTF moment… Annville is no more. Gone. Up in smoke. Ashes and dust. Which I can honestly say I did not see coming. For starters it appears that everyone in the town, or more frankly, everyone we spent time getting to know this season and caring about on different levels is now dead. Just like that. Poof. They’re all gone. The Sheriff. Dead. Emily… sweet, sweet Emily. Dead. Odin and his meat baby. Dead and barbecued. The whole town gone as a result of the various impacts the appearance of God had on these people. 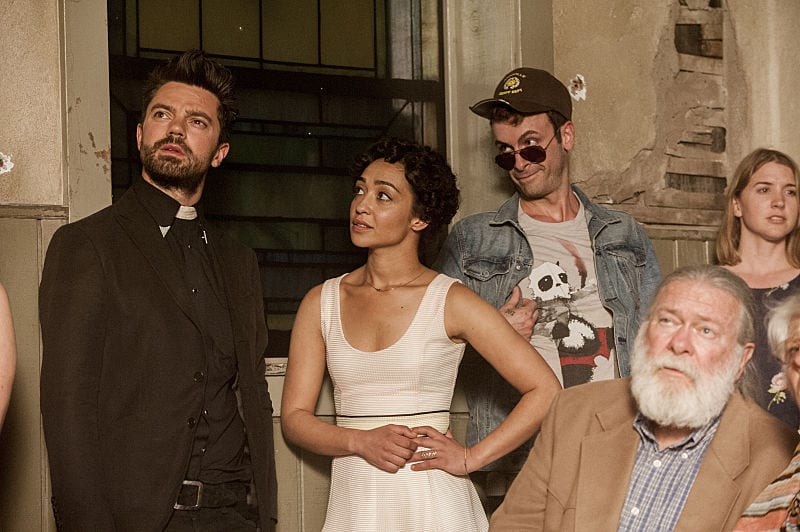 Before I start breaking down the destruction of Annville I think it’s important to applaud the show runners over at Preacher because I didn’t know how much I cared about these people and this town until it blew up. I sat there in my chair thinking “there’s no way they just killed everyone off. I just spent an entire season getting to know them. What the hell?!” and with a news broadcast in the background of a diner it was confirmed. I sat there thinking how the Sheriff will never know what happened to Eugene or how Tulip’s uncle is drinking in that big bar in the sky or how Emily is gone. That one hurt and the hurt went off like a time bomb after the episode ended. And that my friends is the markings of good television. When you can feel it after it ends. It doesn’t hurt that it was scored to a beautiful version of Blind Melon’s “No Rain” which was preformed by Dave Lichens (I think). Everything about the destruction of Annville has stuck with me all day.

A destruction that was brought on by the Facetime meet and greet with God. This was another scene that was so wonderfully weird and theologically heavy, as a typical white haired and white bearded (“I told you he was white”) man sat on a throne and answered some of the town’s questions. All of which were insanely entertaining. If you listen closely you can hear people yell “what’s the deal with mustard” or my favorite “what did you do with the dinosaurs”. Jesse makes good on his promise and brings what he believes to be God to the town. That alone is quite the doings by a small town preacher with faith issues. As the questions continue to roll it’s Jesse who puts two and two together after a question about Eugene gets a strange response and God picks his nose. Yes you read that correctly.

Using Genesis, Jesse accuses the man in front of them not to be God and he admits it. As a matter of fact… God’s gone missing. Let that sink in. Heaven has no idea where God has gone and are dressing up angels (I guess he’s an angel?) to imitate the Big Guy in order to save face. That’s so bizarrely dark and hysterical that I don’t know if I should laugh or cringe a little bit. What caused God to leave the big house? Well, we don’t have that answer. Where does Heaven think God is? Probably here on Earth some where (makes sense). What kind of effect does this have on the people of Annsville? Well it drives them crazy. The mascots (who I learned on Talking Preacher were having an affair together. Anyone else catch that?) hang themselves on the death tree, a group of school girls kill the gross bus driver, Odin makes a meat baby version of his daughter, and the guy running the chemical plant dies during some weird ass sex stuff which is what causes the town to go boom. 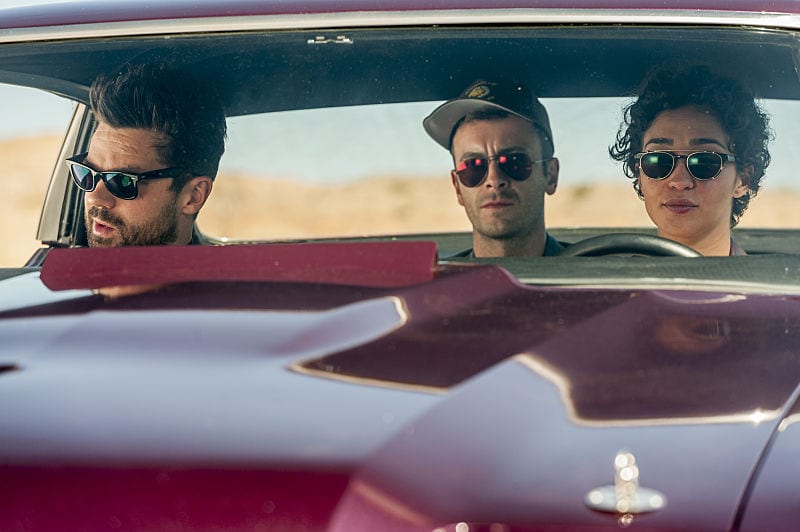 Besides all of this we learned that Tulip was pregnant with Jesse’s baby and lost the baby shortly after Carlos screwed up their heist. This helps explain her very serious vendetta against him. It also helps define the break down/tension in her relationship with Jesse. The ghost of their child weighs on both of them, and when Jesse attempts to kill Carlos to settle matters, Tulip stops him. It’s not that she doesn’t want him dead she just wanted to know that Jesse was willing to do it for her. A touching moment only hardened criminals could understand I suppose. I mean, some girls like it when you bring them flowers but Tulip prefers if you try to kill the guy who did you wrong. To each their own I suppose. Needless to say Carlos lives but gets the crapped kicked out of him. Not sure if he got out of town in time but I would be willing to bet money he went boom with the rest of them.

The show ends on a high note, as Jesse, Cassidy, and Tulip gather up for a road trip to find God making next season probably the strangest road trip ever. I liked how Tulip asked Jesse to show her how Genesis worked, which he uses to have her kiss him, and then punches him in the face immediately afterwards. I like that she’s been one of the only characters Jesse hasn’t used the voice on and their relationship doesn’t need it. Tulip can’t be controlled by anyone as she’s a strong woman who does things on her own. I am curious to see how the three of them get along during the road trip as there has to be a tons of sexual tension abound. Poor Cassidy, did you see that look he made when they were kissing?

Else where our Cowboy has arrived on earth and killed the hitman angel. One has to believe that there is something special in those bullets of his that doesn’t allow the angels to regenerate which is sad considering he killed DeBlanc last week. I’d really like it if he returned please and thank you. 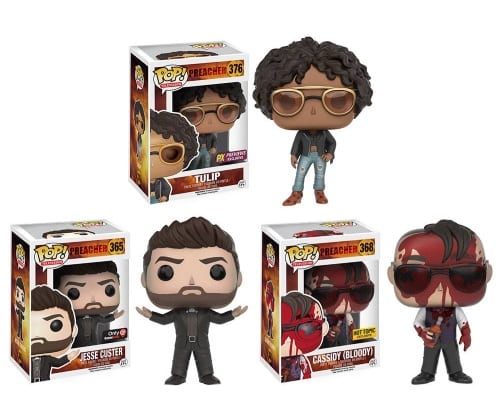 And just like that the first season of Preacher is over, and I can honestly say that I already miss it. There was something refreshing about the weird and outlandishness of this show. The acting was always on point, the cinematography was beautiful at times, and the character development was rich. From what I understand next season will pick up where the comics start making this whole thing a bit of a prequel, and allowing me time to get into the comics before next season (See? Vindication!). Most of the events of season one are alluded to in the comics but never really seen, and I think this might help restore faith in some comic fans who didn’t see the comic in the show they were watching. I on the other hand really enjoyed the show. I think good television can be weird and uncomfortable and funny and thought provoking. Preacher had tons of those moments and I for one will be waiting patiently to hit the road with it next season. In the mean time I’ll wait till October for the Pop Vinyls to drop.

There you have it Geeklings. The first season of Preacher has wrapped. What did you guys think? Did any of you see this coming? Are you excited to see the show tackle more of the comics next season? Will we ever see Eugene out of Hell? Or will we ever see Eugene in Hell (insert sad emoji)? The comments are all yours and thanks for tagging along with me this season. I hope you had as much fun reading these reviews as I did writing them. I mean, where else am I going to get to say things like “walk of shame back to heaven” or “God picked his nose”? See you next season!

Images from AMC and Funko