Disclaimer: Like many 90s kids, I am someone who not only grew up with the Power Rangers but was also largely influenced by them. As such, the original series is very near and dear to my heart.

It seems like Hollywood has Reboot-fever lately… some studios more than others. Now Reboots are a touchy subject, especially when many feel the original work doesn’t need a Reboot. So in order to be successful, Reboots – like the Power Rangers themselves – need to follow 3 Rules:

So where does the 2017 reboot of Power Rangers stand? Well considering my insanely high standards, I have to honestly say…. it hit every single mark wonderfully!!

As many of you know, the original Mighty Morphin Power Rangers was a mix of original scenes with our ‘teenagers with attitude’ spliced together with footage from the long running Japanese superhero series, Super Sentai. So if you ever wondered why things were rarely explained and Rita’s words never matched her mouth… there you go. As the series went on, more original scenes were filmed and there were even two unique Power Ranger films, but by then the lore was already established.

What Power Rangers needed above all else was a chance to define themselves and create their own universe that didn’t depend on reedited footage of another show. It needed a chance to go back and give us the stories we couldn’t have in ’93. Boom! Studios started that trend with their amazing comic adaptation of the series. And now Lionsgate continues that trend for film with this surprisingly stellar reboot!

From the moment the film starts, we are given backstory the original series never did. We get to see some of the history between Rita and Zordon, and even if you didn’t “get the hint” then, it’s explained later on in greater detail. Even the Rangers’ own journey is wonderfully explored. In the original series, their martial arts skills and ability to control the Zords was explained away by “the suits make it feel like I’ve always known this”. Here, we see the Rangers actually learn to fight and control their Zords. They won’t get it right away, and that makes the pay off SO much more rewarding when they finally do get it. Even the Zords unorthodox Megazord combination is given an explanation of sorts. Though all of this isn’t actually the most satisfying part of the film -the characters are! 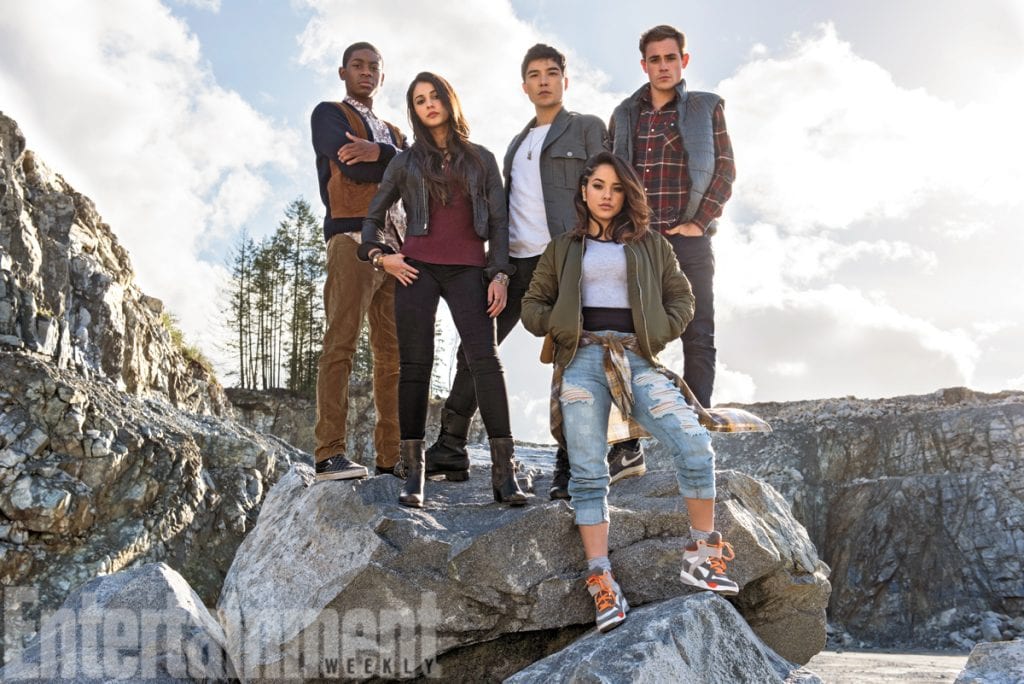 In the original series, we were given “five overbearing and over-emotional humans” that just happened to become friends. This film actually takes the time to look at each ranger and explore who they are and why they’re here. Each character is dealing with something the original series would have never had the guts to deal with. Not all rangers have the same amount of screen time, but it’s okay because even those with less air time have problems that immediately get the audience on their side and feeling for them. By the film’s end, it’s crystal clear that these five teens depend on each other both as rangers and as friends. It’s an emotional trip that I never thought I would have gotten from a Power Rangers film. Whereas most Power Ranger episodes left you waiting for the action, this film actually makes you care deeply about the characters under the helmets. ALL the characters!

As you’d expect/ hope, this film is full of Easter Eggs – some of which eve die hard Power Ranger fans might not get. But this is a Spoiler Free review, so I’ll go into that at a later date. Though I will tell you that (1) there are cameos of former rangers (2) a version of the ‘Go Go Power Rangers’ theme song is used (3) and there is a post credits. And yes, there’s a 9/10 chance you can guess what that Post Credit deals with.

Yes sometimes the graphics were hit or miss – usually with vehicles. And yes, sometimes the film was so over the top that I felt embarrassed enjoying it. But that’s what Power Rangers is! This film expands on the original in every way, shape and form; and I left that theater feeling like a 5 year old who could take on the world – and again having a crush on the Pink Ranger…. some things never change lol

It might be a little different that what you remember, but that’s what makes it great! If you wanted the Power Rangers exactly as you remembered, check out Netflix. If you want to see your childhood heroes rise again and tackle  ‘out of this world problems’ along with real world problems, go see Power Rangers (2017)! The cast, writers and everyone involved in the film knocks it out of the park and I can’t wait for the sequels!

Hopefully you enjoyed this Spoiler Free Review. And be sure to check back in a few days when I count down the biggest Power Rangers Easter Eggs and maybe even explain some of the things you might have missed. Again, I’m actually surprised by how deep and enjoyable it was!