Walking Dead fans were given some surprises this season, first with Father Gabriel and Jadis hooking up, and second with Rick being swept off by helicopter with Jadis.

Seth Gilliam and Pollyanna McIntosh who play Gabriel and Jadis on The Walking Dead were present at Walker Stalker New Jersey this weekend where they talked about that relationship as well as their individual character growth.

McIntosh says that Jadis not being in the comics has its advantages,

It’s one of those things where it would be lovely to have her in the comic books because I’d have great reference. But I don’t have people looking at me saying you don’t look like her you’re not quite right. She’s Gimple’s creation and she’s been a really awesome character to play.

She recently directed a film called Darlin’, which is a sequel to The Woman. She says she plays a part in that film that had her in very cold conditions, speaking in short truncated sentences similar to Jadis’ “garbage speak.”

The Woman ended in a way that suggested a sequel and the fans have been asking on for years. The producer came to me and said, Would you direct the sequel? and I was very honored, but I felt very strongly that I needed to write it so it was my vision from the start. It will be out in 2019. 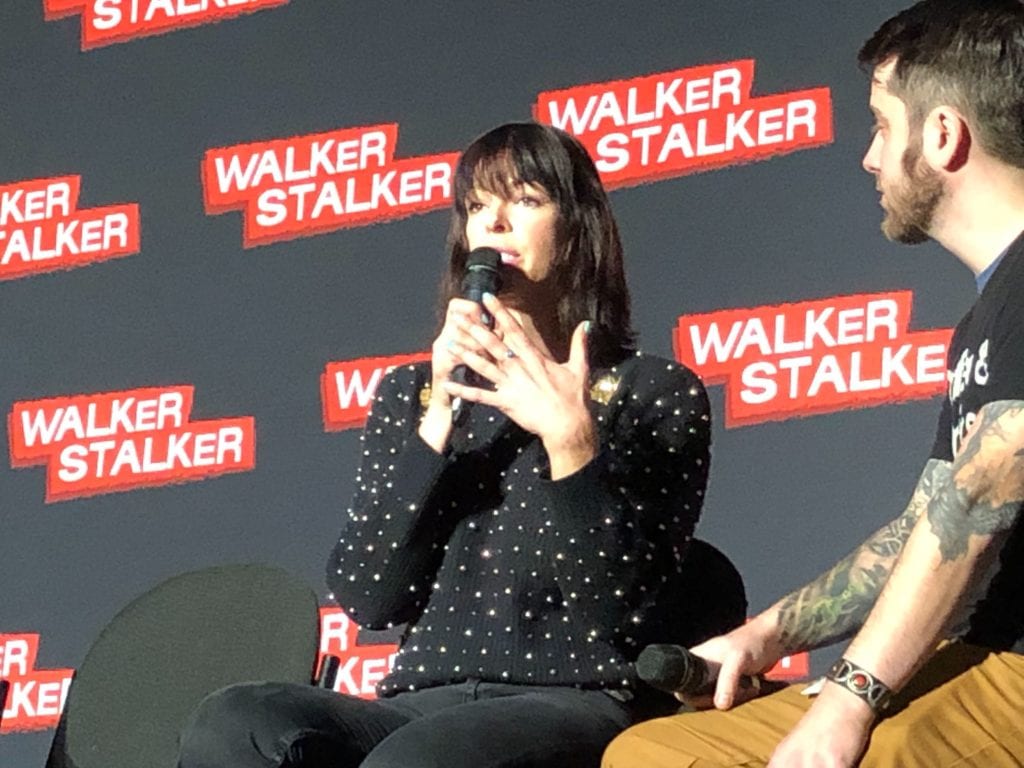 She also talked a bit about a cause close to her heart, The Joshua Nolan Foundation that raises awareness for mental health in schools. You can check out her ‘Make Art Not War’ merch benefitting the cause here.

McIntosh was asked about shooting on Andy’s last day,

It was really emotional as you can imagine. We all love Andy to death and luckily we didn’t really have to love him to death. It was my last day shooting that scene and, as it always is, was really sweet and warm. It was emotional. Andy was covered in this red blood, and he’s great, he will ask for More, more, more. He gave me a great big hug at the end and I was covered in it. 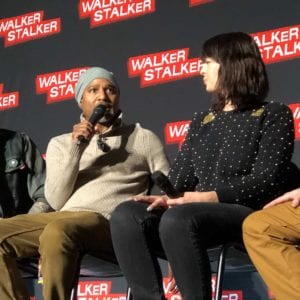 Seth was asked to talk a little bit about Father Gabriel now coming into his own after all of his struggles, and feeling confident enough to have a relationship beginning with the frog mating called scene with Jadis. He says it was the first time playing intimacy with a woman, as he usually is cast in role in which his character is intimate with men.

It was exciting for me. It was kind of like breaking new ground for Father Gabriel, and showing new sides to him. It was my first time kissing a woman on screen before. Now, in my 50s, I’ve turned back to the women. So it was important for me to look sexy. He had been such a sex-less character as a priest-as you’d imagine a priest to be. Pushing aside those normal human feelings because of your faith and conviction. I wanted him to sparkle and for it to be an “Aww” moment not an “Ewww” moment.

McIntosh says she very much enjoyed that moment,

We were in the moment and it felt cute, sexy and exciting. She (Jadis) felt like she got it right.

Gilliam says he has a special contact technician who puts in his blind eye contact with eye drops every half hour, or else it will stick to his eyeball.

It’s kind a cool though it messes with my depth perception and vision and helps to lock me into character, and it looks cool.

Gilliam is also defending his character’s role in letting Negan out of the jail cell. He says there was a perfectly capable guard at the door that should have been watching and locking the door, so it’s not his fault.

He talked about Gabriel’s strength.

I think he’s a survivor. People that were supposedly stronger and better than him are dead. He is alive and he’s keenly aware he has something to offer, with every step and breath he takes on the planet.

Home » Featured » Pollyanna McIntosh: Jadis Not Being From ;The Walking Dead; Comics Has Its Advantages