You can certainly tell Pokemon Ultra Sun & Ultra Moon is releasing soon. It was about a month between our first ULTRA update and the second. Now a few weeks later and we need to dive into ULTRA Update #3. The theme of this episode is all about the expanding world in Ultra Sun & Ultra Moon and how you interact with it. We’ve gotten hints at this before in prior updates, but now we’re getting an extensive look at just how much this game will entail.

If my past updates haven’t, THIS will be the one that makes you start looking at Ultra Sun & Ultra Moon as not just ‘more of the same’.

One huge changed that was introduced in Sun & Moon were ride Pokemon which replaced the need for HM slaves – in a sense. Whereas some HMs were a burden to keep on hand (ie: Flash, Rock Smash, etc) others were quite powerful moves you’d have taught your Pokemon regardless (ie: Surf, Fly, etc). Though to be honest, when Omega Ruby & Alpha Sapphire introduced free flying on Mega Latios and Latias, most of us stopped caring about Fly anyway. And whereas Sun & Moon might not have had any free flight mechanic, Ultra Sun & Ultra Moon are making up for it with Mantine Surf!

Mantine Surf will not only allow you to surf from island to island, but will also serve as a minigame where you can score points for performing tricks. What you can exchange these points for – or earn by reaching higher ranks – remains to be seen, but judging by the visuals, it’ll be an exciting new way to interact with the Pokemon world. But what about when you’re between world? Well that’s where the other two important Ride Pokemon come into play – Solgaleo and Lunala!

That’s right! You will actually be able to ride atop the two Legendary Pokemon as you ride between the Pokemon World and Ultra Space. Whether discovering new realms that house the Ultra Beasts or taking on the residents of Megopolis – which we’ll get to in a moment – it seems as though you’ll ride atop Solgaleo and Lunala, collect rings and open up new windows intro Ultra Space! Whether or not you’ll be able to also do this in Necrozma’s Dawn Wing and Dusk Mane forms remains to be seen, because even though they encompass Solgaleo and Lunala, they’re still Necrozma – and he really doesn’t seem too friendly.

One of the weirdest parts of Sun & Moon was how they did away with a traditional Pokedex and had a Pokedex inhabited by the Pokemon Rotom. Does this mean you have Rotom registered in your Pokedex? Do you actually have 7 Pokemon to battle with? SO MANY QUESTIONS!!!!!!!! Well, Ultra Sun & Ultra Moon might not answer those questions, but they do actually start handling the issue a little better. For example, much like a Pokemon’s affection grows for you the more you use it/ play with it, your Pokedex will also gain in affection for you based on how long you’re together and how you interact. And much like other Pokemon, as Rotom Dex’s affection grows for you, you’ll get some handy perks.

From perks that help you gain experience faster to ones that make you gain more EXP or prize money, it definitely benefits you to be friendly to your traveling buddy. Though the biggest perk – and a possibly metagame breaking one – is the ability to use more than 1 Z-Move per battle. Now as you’ll remember, Z-Moves are ridiculously powerful moves that were originally limited to one per use; though as we theorized months ago, Ultra Sun & Ultra Moon will up that cap. Rotom Dex Friendship seems to be part of that path now. That being said, there has to be some built in rules about when you can and can’t use this power. Half the fun of challenging battles would be completely erased as players now spam Z-Move after Z-Move.

While we’re on the subject of Z-Moves, Solgaleo and Lunala – and thus Necrozma Dusk Mane and Dawn Wing – get a new pair of Z-Moves bonded to Sunsteel Strike and Moongeist Beam. The new moves are called Searing Sunraze Smash and Menacing Moonraze Malestrom respectively…. So. Much. Alliteration! Style wise, the move is actually really interesting as it shows how all 3 of these Pokemon are inter-dimensional, as you transport your opponent to Ultra Space, beat them up and then bring what’s left of them back to Alola.

It’s been ages since we’ve had more than one region to explore in a Pokemon game. The stand out Gen for this was of course Gen 2 – which was originally supposed to be the last – and since then we never really got it again (besides the remakes). The closest we got since was FireRed &LeafGreen which gave us a few islands to explore post game. Well, it looks like Ultra Sun & Ultra Moon are bringing it back into play as we’ll get to explore various parts of Ultra Space!

Now they showed a lot of different spots in the trailer, so I’m betting these are small mini areas within Ultra Space we’ll get to check out. This is also confirmed in the Ride Pokemon scene I was talking about earlier where we see our Legendary mounts collect rings as multiple portals opened in Ultra Space. Right now I’m expecting a mix between the Sevii Islands of FireRead & LeafGreen and the mini portal islands in Omega Ruby & Alpha Sapphire because we know at least one part of Ultra Space will be a bit larger, Megopolis. It’s here that you’ll meet your new opponents, the Ultra Recon Squad who have suffered from Necrozma’s light draining power in the past. But do they seek to bring back the light or plunge more worlds into darkness?

It’ll be a while before we see how this plays out – most likely when the game is actually out – though what I’m most excited about is that IF this is the Ultra Space version of a criminal organization, then they’ll have their own Pokemon to battle with. We see this in the trailer, as it seems the last two revealed Ultra Beasts – Burst and Assembly – were part of the Ultra Squad’s team as well as a newcomer – UB Adhesive. Depending on whether we fight any grunts besides the two version exclusive trainers, will determine if we get even more Ultra Beasts. Further more, exploring the wilderness of Ultra Space should cause random encounters as well. Are Ultra Beasts truly Legendary in their own world or are they just the Rattata of Ultra Space – around every corner? I guess we’ll find out, but there better be a bunch of new alternate dimension Pokemon – maybe even some that evolve. 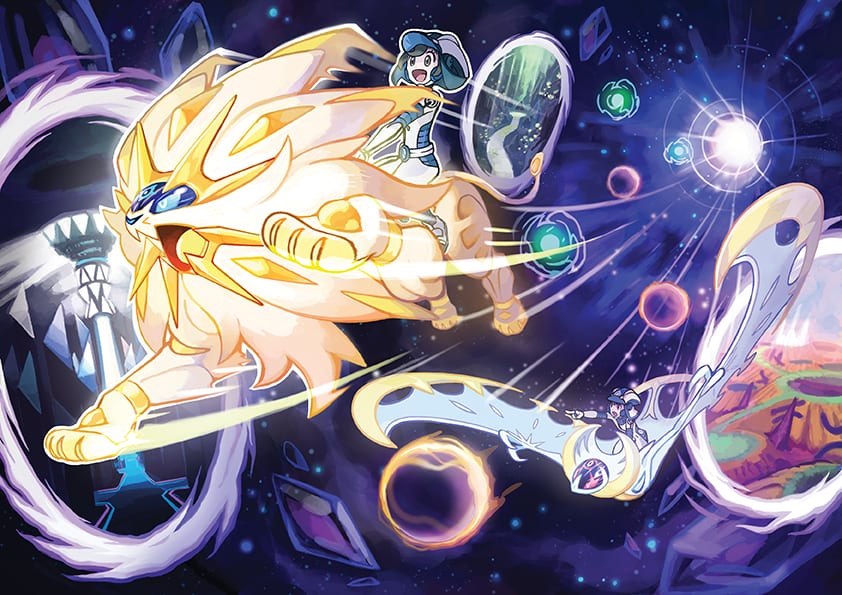 Overall, this was the biggest update yet and even though I was already on board after the darker story reveal, the news of exploring Ultra Space and interacting more with the world around you is absolutely incredible. What started as a game I couldn’t help but roll my eyes has now become something I couldn’t be excited for – and yet the Pokemon Company keeps finding a way. November 17th can’t come fast enough!

Still a month to go, so stay tuned for our next (and potentially final) Pokemon Ultra Sun & Ultra Moon: ULTRA Update