Pokemon Go has been setting a lot of ground work for fuure updates lately. From shiny Lugia encounters to pairing accounts with social media – a move that we hope hints at future Trading and PvP updates – Niantic has certainly done wonders to dispel our fears of them abandoning this game. And now after months of finding scraps here and there in the source code, we now have official word of Quests being introduced to the game. That being said, even if there were plenty of hints leading up to this, no one could have imagined how much these Quests would impact the game.

Niantic unveiled today that Quest won’t just be another ‘Daily Bonus’ but rather lead to greater rewards and even storylines for Mythical Pokemon. Along the way, you’ll act as Professor Willow’s research assistant and help discover clues to the whereabouts of the mysterious and mythical Pokemon Mew – at least that’s what this first story is about. This mechanic will of course be used in the future for other Mythical Pokemon – ie: Celebi, Jirachi, etc – and can even be used to tell some important lore of existing Pokemon. These Quests will ultimately be divided up into two types:

These will basically be Daily Quests and require you to do things like spin Pokestops, win Battles/ Raids or even catch specific types of Pokemon. If you complete one of the listed Daily tasks, you’ll get a Stamp. Collect 7 Stamps and you will obtain a Research Breakthrough reward (basically a Weekly Streak) which will reward you with anything from Rare Candies to Raid Passes or even – seemingly – a pop up encounter with a Legendary! 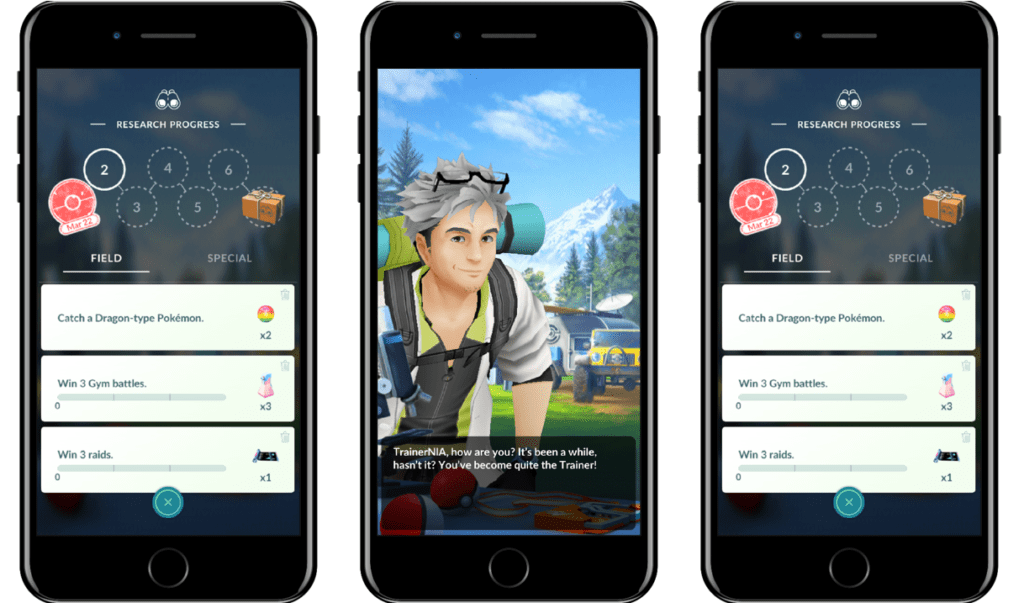 These deliver more ‘Story-Driven’ content. Professor Willow will return and give you a task that will be tracked much like the Daily Field Research Missions. Though instead of collecting Stamps for a streak, you are progressing through a story of set research tasks until you encounter Mew.

This is definitely a fun new addition to Pokemon Go and I can’t wait to see how this will be implemented in the future alongside all the other things they’re working on. Though if the final stage of this Mythical quest doesn’t involve looking under a truck…. are they really old-school Pokemon fans?