Over the past few months, Niantic has been adding the coding for all Generation 3 Pokemon to the game. Then in October for the Halloween Event, the 5 Ghost-Type Pokemon originally discovered in Hoenn were released. Now fast forward to today, and we get official word of the Gen 3 Release later this week. Though unlike previous updates, this one will come in waves as well as set up a major new game mechanic that Niantic has been planning on since the start. So check out the reveal trailer below and let’s discuss what changes are coming and what each means for the future of the game.

Similar to the Gen 2 (Johto) Release, Gen 3 (Hoenn) began with a select few being released (ie: Egg/ Baby Pokemon for Gen 2 and Ghosts for Gen 3). What follows that initial release though will be different as Niantic is actually planning on releasing these new Pokemon in waves. The official release is a little confusing as the title claims “50 new Pokemon” while the body of the release states, “Treecko, Torchic, Mudkip, and several more Pokémon”.

If I had to wager a guess though, I theorize that the release will give trainers every Pokemon from Treecko to Delcatty. That is not only the first 50 Gen 3 Pokemon but also brings us to the Sabeleye – the 51st Pokemon and one of the Ghost-Types that was already released earlier in October. That would mean Phase 2 would release everyone from Mawile to Kecleon and Phase 3 would release Tropius to the end. That being said, allof the Ice-Type Pokemon of this Gen would be placed in the Phase 3 release; and with Winter quickly approaching the Northern Hemisphere, it’d be a shame if we missed out. So perhaps there will be some mix and matches. 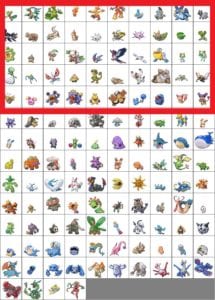 With Gen 3 comes loads of new Pokemon that will change up the Meta and Gym Battling System, but that’s not all. One Pokemon in particular – Castform – has several different forms dependent on Weather, which also happened to be one of the two major gameplay changes Gen 3 brought to the Pokemon series. To reflect this, Niantic has added in game Weather to the series and it’s going to have a major impact on everything from capturing to battling.

Having weather affect your gameplay experience is something Niantic has been aiming for since Day 1 and they’ve done it to limited success; but this new Weather system is the fulfillment of that desire. Sun, Rain, Snow and more will all be reflected in-game to not only add a level of realism (and maybe make Pokemon Go your new weather app) but also to impact your gameplay experience. For example, periods of rain will increase the spawn rates of Water–Types. Snow will increase the odds of Ice-Types, etc etc. Though the affects dont just impact the Pokemon you find but also battling. The example given is that Sun will increase the Power of Fire-Types and weaken Water, while Rain will do the opposite. This is how weather is affected in the core-games as well, but how will they handle other weather phenomenon?

Will Snow increase the power of Ice-Types or will it hurt Pokemon in battle like it does in-game? Will Rain also increase the power of moves like Thunder like it does in game? These are all question we’ll have answers too soon, but one thing is clear: Gym Battles – and potentially even Raids – just got more strategic. Though with the other big change of Gen 3 being Pokemon Abilities, one has to wonder if those are on the update list next. The core Legendaries of this Gen play a big part in Weather formation, and Raid Battles against Groudon could go very differently if it has a Drought Ability – which changes weather to Sunny – to empower all of its moves and weaken its counter.