Pokemon Go players have been anxiously awaiting the next event with the Holidays just around the corner. With more and more sprites being found in the game, and hints that Ho-Oh will finally be released, players have been eager to hear what this year will bring. Even if it just brought more double XP and Stardust like last year, it’d still be something. Right?

Well Niantic just revealed this year’s plan and it’s… presumptuous at best and infuriating at worst.  Check out the announcement trailer below and I’ll see you afterwards to go over what this event ACTUALLY entails – because the trailer leaves that part out… or flat out lies at points…

The event will run from November 20th to November 26th, and whereas the event goal might seem a little staggering, it only gets worse when you also factor in past events and look at the finer points of the rewards. You see, last year Niantic held a “Thanksgiving” Event around the same time and it awarded players double XP and Stardust from the start. This time around, we’d have to catch 1.5 Billion Pokemon for the same rewards – with the addition of lures lasting 6 Hours. This is a Holiday week for many people, and I’m pretty sure most will spend a good chunk of it with their families and loved ones, so that cuts the odds of us reaching 3 Billion by a lot. And sure, this is a challenge for the whole world, BUT…. that didn’t really help Nintendo with their Pokemon Sun & Moon Capture challenge.

Last year, following the release of Pokemon Sun & Moon, there was a Global Challenge to capture 100 Million Pokemon. This turned out to be a VAST overestimation as trainers worldwide only captured 16 Million. Sure it’s a different game/ device; but if a game that was just released couldn’t reach 100 Million captures in two weeks, the odds of a game in its second year hitting 3 Billion captures in one week isn’t great. But maybe the trainers will surge and rise to the challenge with the proper incentive! And as we already discussed, the basic incentives aren’t great since they were offered for free last year and multiple events previous. The biggest draw for this event is the opening up of two Region Pokemon, but even that allure is fading once you look into the actual details. 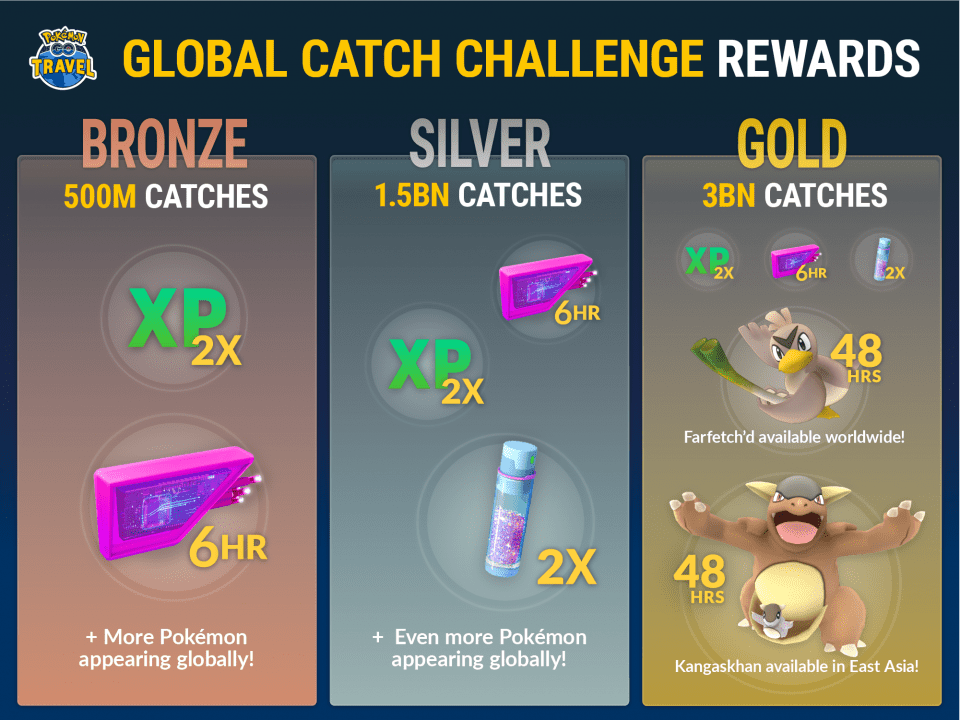 Even though the trailer makes it seem like Farfetch’d and Kangaskhan are going to be available “for everyone”, they actually won’t. IF we hit 3 Billion, Farfetch’d will be released everywhere while Kangaskhan will only be available in Asia. Additionally, these migrating regionals will only be available for 48 hours – and no word on how ‘Common’ they’ll be within that time. With the growing number of ‘Safari Events’ events that bring regionals together in one place, it seems weird that Niantic is still being so over protective of their Regionals. And whereas that’s totally fine, it’s still a bit much to ask that worldwide players work so hard to mostly earn back the same rewards they did the prior year. Maybe if the double XP and Stardust was a standard bonuses the 3 Billion would be a bit more obtainable.

We’ll know for sure in a week, but for all we know, Niantic could just tell us at the end “hey we did it”, whether or not we actually did. After all, there’s no live counter to check our progress. But what do you think of this event? Should more regionals have been included to make this more appetizing? Sound off in the comments below!