Two weeks ago, Pokemon Go released the first batch of Gen 3 (Ruby/ Sapphire) Pokemon into the game. Rather than a full release like Gen 2, this staggered release was used to keep players engaged longer while also interspersing some additional Raid updates – like Groudon last week. Well what started as a conservative approach to new content is quickly becoming a blowout sale. For the 3rd week in a row, Pokemon Go is adding new Pokemon and mechanics! Though to be fair, it is “the most wonderful time of the year”.

The event will mainly focus upon increasing the spawns of Ice-Types as well as adding new Ice-Types and Water-Types as well. Insightful players will notice that many of Gen 3’s Water-Types were absent in the the first batch of Gen 3 Pokemon released. Starting later today at 1:00 p.m. PST Water-Types like Feebas, Sharpedo, Relicanth and Wailmer will begin spawning. Additionally, Santa-Hat Pikachu is returning and there’s rumors he’ll be bringing the Santa-Pokemon Delibird with him – though nothing mentioned about him in the main release. We also have confirmation that a new item called Star Pieces, which increase Stardust gains for 30 minutes, will be added! 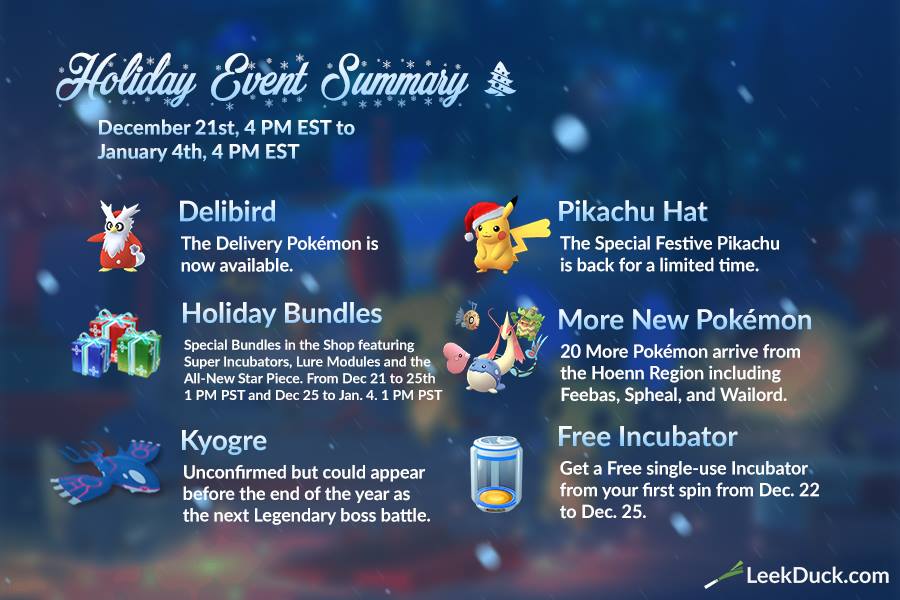 The rest of the Event will be divided into two parts in terms of bonuses and purchasable items.

I still feel like there’s a little left to this event, so I’ll update this accordingly. But for now, get ready for later today as about 20 new Pokemon will be added to the game. And judging by the event art, Kyogre – the second member of the Weather Trio – might begin appearing in Raids!