As we predicted earlier this week, Pokemon Go’s Halloween Event will bring with it the new Ghost types introduced in Gen 3 (ie: Duskull, Dusclops, Sableye, Shuppet, Bannette). The news was confirmed this morning by Niantic, but players got a strong hint yesterday that the leaks were true when an update hit Pokemon Go and added a few new badges – one of which was a Badge for discovering 5 Pokemon originally discovered in Hoenn (the region of Gen 3).

Much like Gen 2’s Pokemon Go release which was preceded by new baby Pokemon, Gen 3 is also getting a timely set up. Though this event will have much more than just the new Pokemon. Here’s what we can expect from the Halloween Event.

I love it when the community comes together and predicts an event like this down to the letter. So go out there and enjoy trainers. And remember, if you’re a fan of using your AR camera in Pokemon Go, share your snaps with the hashtag #PokemonGoHalloween 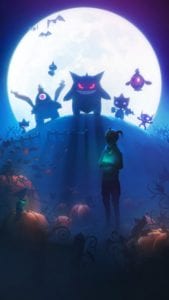