Last week, Niantic decided to celebrate the One Year Anniversary of Pokemon Go with the long awaited addition of…. a Gift Box that costs 1200 PokeCoins? No. No. That’s not right. I mean who charges someone for his or her own anniversary gift?

Well fear not fellow Trainers! That was just something to tide people over. The REAL Events are starting very soon and they’re actually real world events that are sure to up everybody’s game. We already know about the Chicago Event but what is actually happening there? Can people not in Chicago take part? Will there be other events? Why is Safari Zone in the title? Well let’s sit down and answer each and every one of these questions.

Pokemon Go Fest tickets sold out faster than…. Actually I’m pretty sure they sold out faster than Comic Con. And just like Comic Con, scalpers got there in no time and are selling tickets at ridiculous prices. But that’s a rant for another day because there’s only 10 days until Pokemon Trainers descend on Chicago’s Grant Park. So what will be happening at this event? Well it’s two-fold and will require hard work from those lucky Trainers in attendance and us at home.

During the day, there will be several half hour windows to catch specific Pokemon Types if you’re at Grant Park. If you collectively achieve Gold Tier for any of these Medals, you’ll receive an awesome Bonus. MEANWHILE, the Pokemon Go Players not at the event will have to catch as many Pokemon as they can. If they can achieve Medal ranks, they’ll extend the Bonus period for the Pokemon Go Fest Players. If the Worldwide Trainers can reach Gold Tier within the Challenge Windows, they’ll unlock a Mystery Challenge for all those at Pokemon Go Fest. Nice right! 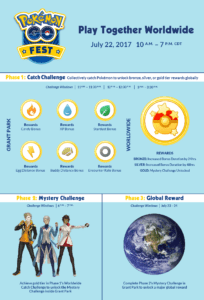 But okay, you’re probably wondering “What’s in it for me?” Well here’s the big scenario we want to play out on July 22nd.

So this isn’t a time to be selfish or spiteful if you didn’t get a chance to go. The better the Pokemon Go Fest players in Grant Park do, the better we ALL do! There’s apparently another large scale Pokemon Event going on in Chester England for the Heritage Festival July 22nd – 23rd. There will of course be a bunch of small events throughout the city and a larger one at Chester Castle. So pair those with the Global Pokemon Go Challenge and we have the numbers on our side!

Remember the Safari Zone in the original games? In case you don’t, the Safari Zone was a small area of the game that was located in the northern portion of Fuchsia City. There you could encounter Pokemon that you’d otherwise never be able to see in the wild: Tauros, Chansey, Kangaskhan and plenty more! Wait a second. Tauros and Kangaskhan happen to be two of the Regional Exclusives in Pokemon Go. Coincidence? Not anymore!

It’s a fun little Easter Egg that the original Safari Zone mechanics of Ball, Bait, Run is more or less what the Pokemon Go mechanic is, but now even more so with the introduction of these Safari Zone Events as they’ll bring back many of those Safari Zone/ Regional Pokemon REGARDLESS of where you play! That’s right! Foreign Pokemon like Mr Mime, Heracross, Farfetch’d and more will all spawn during these Safari Zone events. So if you aren’t a jetsetter, this is your best way to complete your Pokedex! Though it’s not just Regional Exclusives that will appear. In fact, there’ll even be “unique and powerful” Raid Bosses for these events. Now what these Raid Bosses will be remain to be seen. Maybe there will be Legendary Pokemon or – more likely – Rarer Pokemon like Chansey who were also found in the Safari Zone. Or could the Safari Zone graphic released hint at the identities of these special Raid Bosses?

These events right now have just been announced for Europe at select Unibail-Rodamco shopping centers, but there’s sure to be more announced for different centers in Asia, Australia, North and South America, etc. The existing dates/ locations are as follows.

What are you most excited about with these Events? Are you afraid Pokemon will run as often as they did in the original Safari Zones? Sound off in the comments and let us know!