This past weekend, Pokemon Go held its first Community Day Event and despite lasting only 3 hours, it was a rush! Players not only received x2 XP and Surfing Pikachu, but Niantic also drastically increased the spawn rate of Shiny Pikachu so that even casual players could catch one… or several. So now is the perfect time for Niantic to announce what their next big move(s) would be, and they did not disappoint as we have two major announcements this week.

The next Community Day will take place February 24th and will follow the previously scheduled time slots. This time the Pokemon of choice will be Dratini. So if you want to build up your Dragonite army or finally achieve that Gold Dragon-Type Medal – arguably the hardest to obtain right now – this is your chance! Though that’s not all we know! Lure will again last 3 hours and instead of x2 XP players will receive x3 Stardust! Beyond this though, there is still more to be confirmed. It’s unclear what Dratini’s exclusive move will be or if it even matter since the move doesn’t remain upon evolution. Though what I’m more excited for is the chance that Shiny Dratini could be unleashed. With the event sill a month away, there’s clearly more to be confirmed. 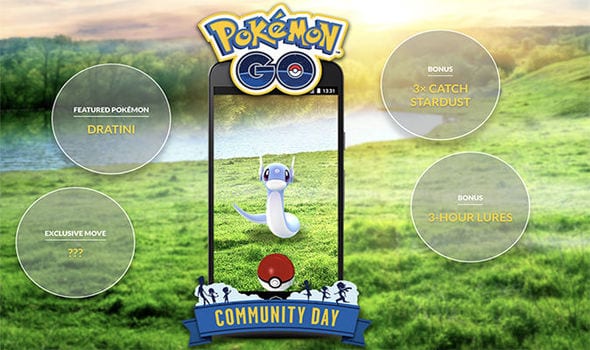 The BIGGER and more pressing news however will actually come into effect later today when 23 new Pokemon originally from Hoenn will be added to the game. The official release doesn’t give specifics, but looking at the photo we can guess that the newly added Pokemon will include the Trapinch line (3), Aron line (3), Whismur line (3), Cacnea line (2), Numel line (2) as well as both Lunatone and Solrock. This leaves us with 8 unconfirmed Pokemon, but due to the desert look of this release, it’s a safe assumption that the remaining 8 are this generation’s 4 Fossil Pokemon as well as Torkoal, Nosepass and the Baltoy line (2). The standouts for this batch are definitely going to be Aggron and Flyon, who will add some much needed variety and power to both the Steel and Dragon-Type meta.

Though despite there being already several Hoenn releases, this will not be the last. There are still some Bug and Flying types that have yet to be added to the game as well as both Pseudo-Legendaries, the Bagon line (3) and Beldum line (3). Perhaps they’ll be added once the final member of the Weather trio (Rayquaza) appears as a Raid Boss. Then again, considering Groudon is seen in the cover art, it’s unclear if it’ll be making a reappearance as well after Kyogre or if both will appear for a few weeks. Either way, it’s interesting to note that this Gen’s strongest/ rarest (Salamence/ Metagross) and conversely weakest/ most common (Wingull/ Spinda/ etc) have still yet to be unveiled, but at least it keeps things interesting. So who are you most excited to catch trainers?