This Halloween, after you are done with all the costumes and candy, you are not going to want to miss this creepy and scary special episode of Paranormal Lockdown.  Earlier this month, Fan Fest News had the chance to sit down and chat with paranormal investigators Nick Groff (Ghost Adventures), Katrina Weidman (Paranormal State) and their cameraman Rob Saffi at New York Comic Con about their new 2-hour Halloween special premiering tonight on TLC.

Tonight, Groff and Weidman will take viewers inside their epic investigation of the Black Monk House in Yorkshire, England.  The house is the home of some of the most violent and crazy poltergeist activity that has ever been reported.  With hopes of capturing the most convincing paranormal evidence to ever be recorded, Groff, Weidman and their camera man, Rob Saffi, experience a lockdown like no other.  The trio spends a record-breaking 100 hours within the walls of the Black Monk House making the excursion the longest paranormal investigation ever on television.

The haunting of the Black Monk House began when Joe Pritchard, his wife, and their two teenage children, moved in, When asked why the location of this epic investigation was taking place at The Black Monk House, of all places, Weidman responded:

“What makes the Black Monk House so special is that this is a case that goes back to 1966 so, it’s 50 years of a haunting, which is pretty crazy.  When the family went away, the son stayed behind with his grandmother. Dust and chalk started to appear in mid-air and then fall to the ground, and they didn’t have an explanation for it.  They thought it was weird, but they didn’t think it was paranormal at the time. But then things started ramping up. Objects began to disappear and then reappear, even when the family didn’t touch the items. From there it went way, but it did come back. And what’s nuts about it is, sometimes haunting stop after a family moves out or they kind of die down over the years but, this is a haunting that has been actively happening for 50 years.”

“Pontrefract is an interesting location in England… There’s a ton of history.  It’s just not about the house, it’s about the land in general.  There’s a legend about the monk (aka. the Black Monk, aka. Fred) and this is kind of where the stories get adapted and legends build up but, we go there because it’s known to be the most violent poltergeist in the history of Europe.  That’s what really fascinated us as paranormal researchers. We’re always looking to put ourselves and embed ourselves in a living condition that is labeled as the most haunted because we want to push the paranormal forward and, in order to do that we have to seek out locations like this.  We’re looking to discover something new in the field and rather than saying ‘Ghost don’t exist’ or ‘ghosts do exist’.  We’re in the middle saying, ‘let’s discover something new as a human race.'”

Saffi also chimed in saying the team felt drawn to investigate the Black Monk House, “As we started doing our research, we realized there was no option but it turn this into a longer investigation. It became very personal for us, and went beyond the show.”

Check out the video below for a quick history lesson on the Black Monk House:

What makes this investigation different than any other paranormal lockdown?  The three agree that spending 100-hours within the location made this one of the most intense investigations they have ever completed.  The longer they stayed, the more they experienced.  The group addressed how spending so much time confined to a location can impact them on a psychological level.  Groff answered:

“We always look into the psychology behind what we’re doing, and that’s what I find so fascinating.  As a human being, we want to know how the brain and body function, and what our breaking point is. We think, what’s the worst that can happen? That’s an ongoing joke that we have.  We try to stay positive…but we’re in this gritty environment, and it’s like we’re on this horrible camping trip.  But we love, and have a passion for, the paranormal. We love going on these journeys, and feel this is what we’re destined to do. We talk about our jobs all the time, and even film when we’re with our families.  We’re interested in the whole conceptual idea about death. It fascinates us, and I love talking about it.  We know what we signed up for. But there are times were we do over-react, because we are humans. If something attacks us physically, we can become ill. That’s why we have cameras on us all of the time, so that we can document it.”

And document all of it, they did!  We got a sneak peek of the full Halloween special and can tell you it is INSANE!  Definitely the perfect spooky special to watch this Halloween.  Check out a preview for the episode below:

Be sure to tune in at 9pm, Monday, October 31st on TLC to watch Weidman, Groff and Saffi’s INTENSE and SPOOKY investigation on Paranormal Lockdown; The Black Monk House. 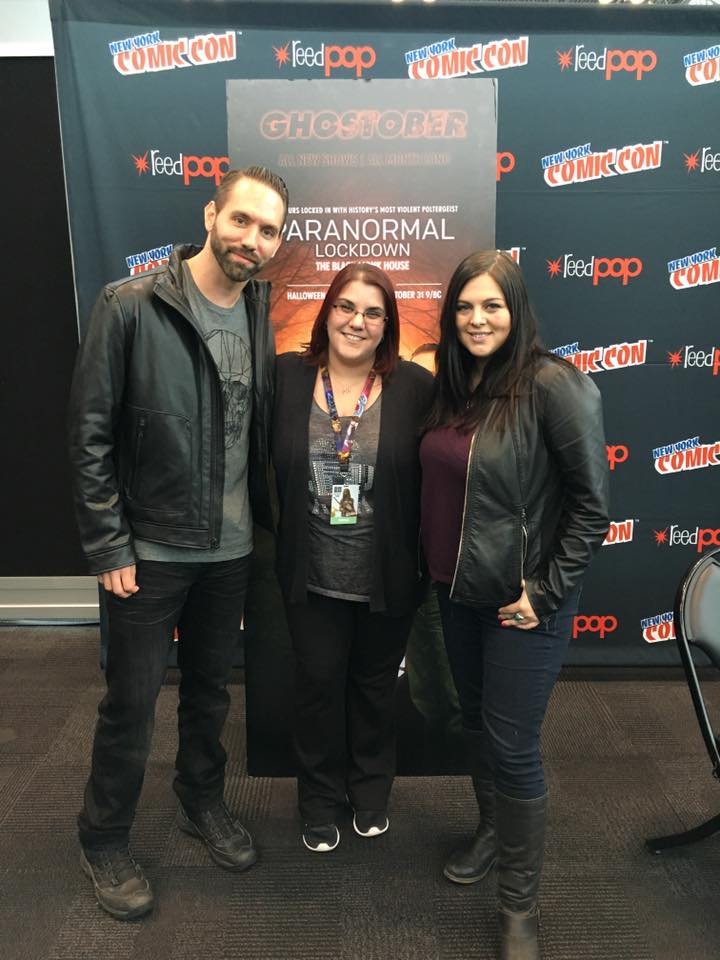