Warning!  SPOILERS AHEAD!  Ged GedYah-self away from this recap if you are not caught up with season 2 of WGN’s Outsiders!

Hey Cousins!  Just when you think this show has brought all the crazy it can bring, another Tuesday rolls around and even more insanity ensues!  In this week’s episode, We Are Kinnah, we saw Hasil get his first job and then promptly quit his first job.  Li’l Foster made some unwanted friends in prison.  Sheriff Wade Houghton ditched a little kid during a spaghetti dinner.  Big Foster’s beef with the Kinnah was validated and the Farrells are pretty much f**ked right now.  Let’s break down the episode, from the beginning (and my apologies a head of time.  This is a long one, folks!  Lots of action in this episode!!):

The episode begins up on Shay Mountain.  Big Foster is awoken by some loud noises outside his home.  The Kinnah are stealing his generator.  When he tries to stop them, one of them pulls out a knife and Big Foster focuses on the weapon.  There is a string of unique beading hanging from the handle.  He tells the Kinnah to get away and, eventually, they drop the generator and leave the area. 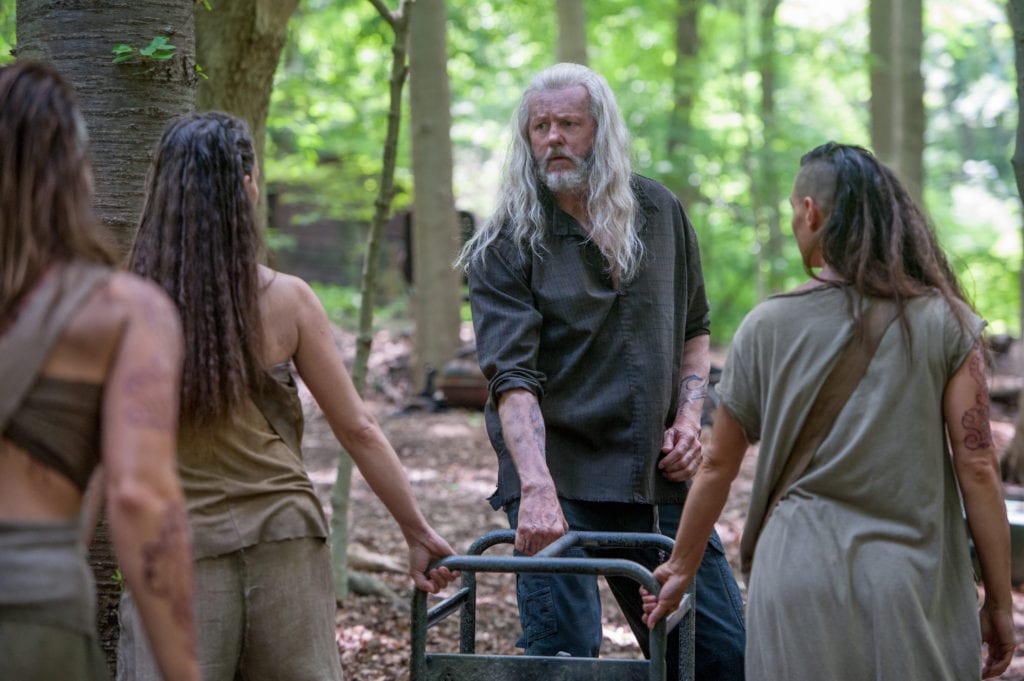 Later on, Big Foster is lodging a complaint with G’Win regarding the incident.  Moregon is there and, of course, she and Big Foster have some words.  G’Win reveals that she gave the OK for the Kinnah to take the generator in an effort to conserve fuel.  Big Foster jumps at the opportunity to call out Moregon as trying to corrupt G’Win and, once again, accuses the Kinnah of burning down the smoke house.  Almost dismissively, G’Win tells Big Foster that she’s heard enough and that he needs to go and find Li’l Foster.  Ugh, G’Win!!!  Snap out of it, will ya?!  Listen to Big Foster!! 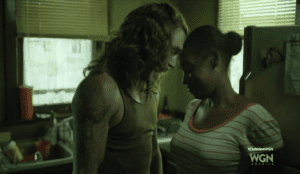 Down in the town, Sally Ann and Hasil are staying with Butch and Frida.  Sally Ann explains to Hasil just how expensive it is to have a child.  It involves vitamins, doctor’s visits, and insurance, which she doesn’t have.  Hasil says it’s no problem.  He’ll just get a job which would be great if he hadn’t been living off the grid all this time and if the town wasn’t facing the worst job market ever.  Sally Ann says she doesn’t mind being the one who works, as long as Hasil is with her.  However, we all know Hasil wants to step up and provide for her and the baby.  Side note: How awesome was the scene between Sally Ann and Frida?  “This kitchen didn’t come with no oven, but there’s always adoption!”  I just LOVE it!

Sheriff Houghton is on his way into the office when he runs into a buddy of his.  They have a conversation about Li’l Foster and Houghton learns about his altercation with the guards in jail.  Houghton seems to be feeling guilt regarding the whole situation.  Maybe guilt is the wrong word but, it’s definitely weighing on his mind.

Houghton walks into his office to find Matt Meyers there and, while that may not seem like a big deal, Meyers is in Houghton’s chair, behind HIS desk!  Looks like the power struggle between these two just reached a new level.  Houghton asks to move Li’l Foster to a county prison, where he will be safer.  They still don’t see eye to eye.  Meyers insists that Li’l Foster is the one who killed Breece Dobbs where as Houghton maintains he is innocent.  In an effort to change the subject, Meyers brings up that two guards are missing (he’s talking about the two guards that were killed by the Kinnah in the previous episode) but Houghton brings the discussion right back to Li’l Foster.  Meyers has noticed Houghton has an obsession with the Farrells but, he demands that they no longer discuss the Farrells in their conversations.

In the prison, Li’l Foster is in the cafeteria eating.  You can hear sounds of the forest; birds chirping, trees rustling in the wind.  He’s taking that doctor’s advice and remembering what he loves so he can survive prison.  He’s remembering his home.  Just then, a group of inmates approach him.  They start by harassing him but, recognizing that a man of his size and strength could be useful to their group, they then try to get him to join what they call their family.  Li’l Foster responds by saying, he already has a family.  They threaten him further but he’s not having it.  He calmly gets up and walks away.  It doesn’t look like the group liked that too much.  Li’l Foster could be in some trouble here. 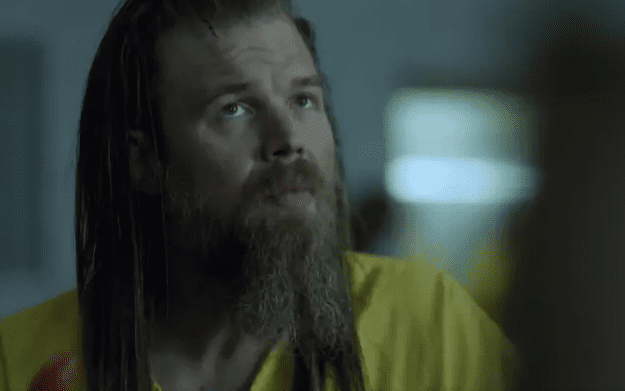 Later on, Li’l Foster is in the exercise yard and another inmates initiates a fight.  The same group from the cafeteria now runs to protect Li’l Foster as the other prisoner threatens him.  What is going on here?!

Back up the mountain, we find out that Big Foster isn’t looking for Li’l Foster, like he was instructed to do.  He’s looking for ways to get rid of the Kinnah.  He and his two Farrell followers go to Hezzy’s smoke house to look for evidence.  Big Foster does some tracking and finds a string of beads in the dirt right next to the burnt down house.  The same string of beads he noticed on the Kinnah’s knife when they had their altercation earlier in the episode.  Uh oh!  Kinnah just got BUSTED! 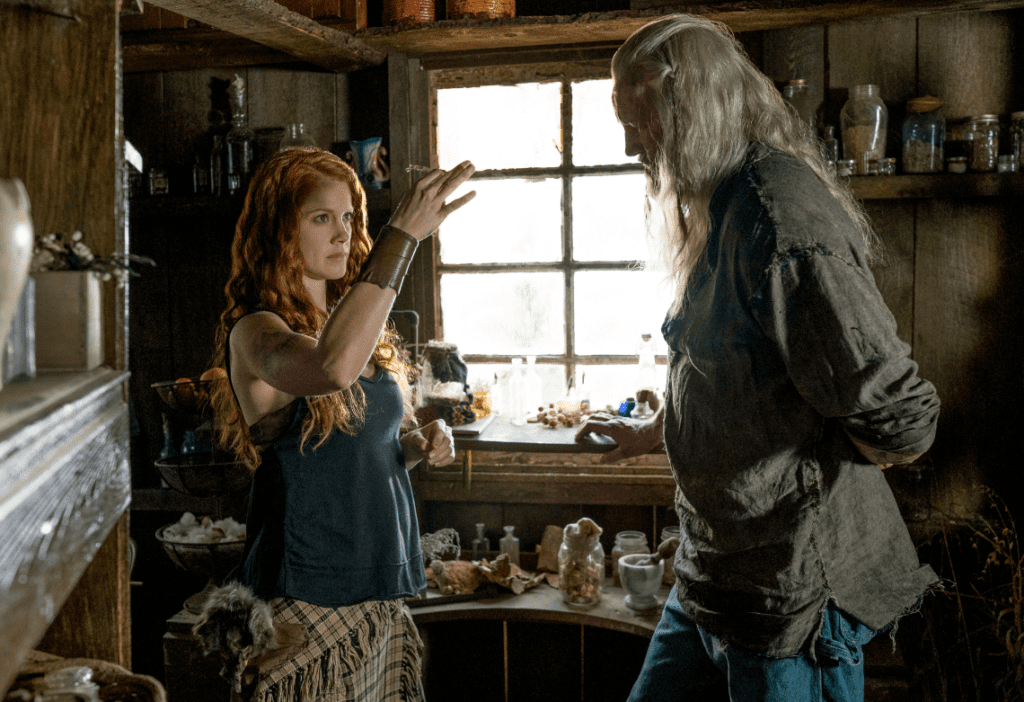 Big Foster goes right to G’Win to present this evidence proving the Kinnah were involved with burning own the smoke house and killing Hezzy.  G’Win doesn’t think that the beads are enough to accuse the Kinnah but, Big Foster insists that it’s enough to at least ask Moregon about it.  G’Win repeatedly brushes him off and has clearly not forgiven him for their altercation but Big Foster calls her out for siding with Moregon.  Ultimately, this conversation ends with Big Foster saying that he will no longer be helping or counseling G’Win.  She’s on her own as Bren’In.

Down in the town, Butch drops off Hasil at a lumber yard, where he can hopefully get picked for a job.  A car pulls up and two men go to get into the back to go to work.  The driver sees one of them is limping and he tells him to step aside.  The driver then calls to Hasil and takes him along.

Hasil’s first job ever is tarring a parking lot on what looks like a super steamy, hot summer day.  His boss calls to the two men, asking if they need a break or some water.  Hasil happily takes the offer and grabs a cold bottle while the other worker does not stop working.  The boss takes out a pad and pencil and marks something down, but what?

Later on in the episode, it’s pay day for Hasil!  He’s finished the job and realizes that he has gotten paid significantly less than the other worker.  The boss was docking him for each water and break he took during the day.  From that full day of hard work, he walked away with $20.  Hasil comes home upset and tells Butch that job was shit.  Butch invites him out to blow off some steam at a place he knows.

Sheriff Houghton is responding to reports of a child living under the deck of a woman’s house.  It’s the child from Big Foster’s house of horrors.  We find out  his name is Samuel but, the poor thing doesn’t know his last name or where he lives.  All he can remember is something about a bear which Houghton believes is a reference to Bear Run Road.  Houghton takes him there to look for his home and his family but, no one recognizes him.  Clearly frustrated with the whole situation, Houghton loses it for a minute then, calms himself down and decides to take Samuel out for some food.

G’win calls for Moregon to meet with her.  She tells Moregon that he continues to accuse the Kinnah of causing the smoke house fire and shows her the beads that were found by the house. 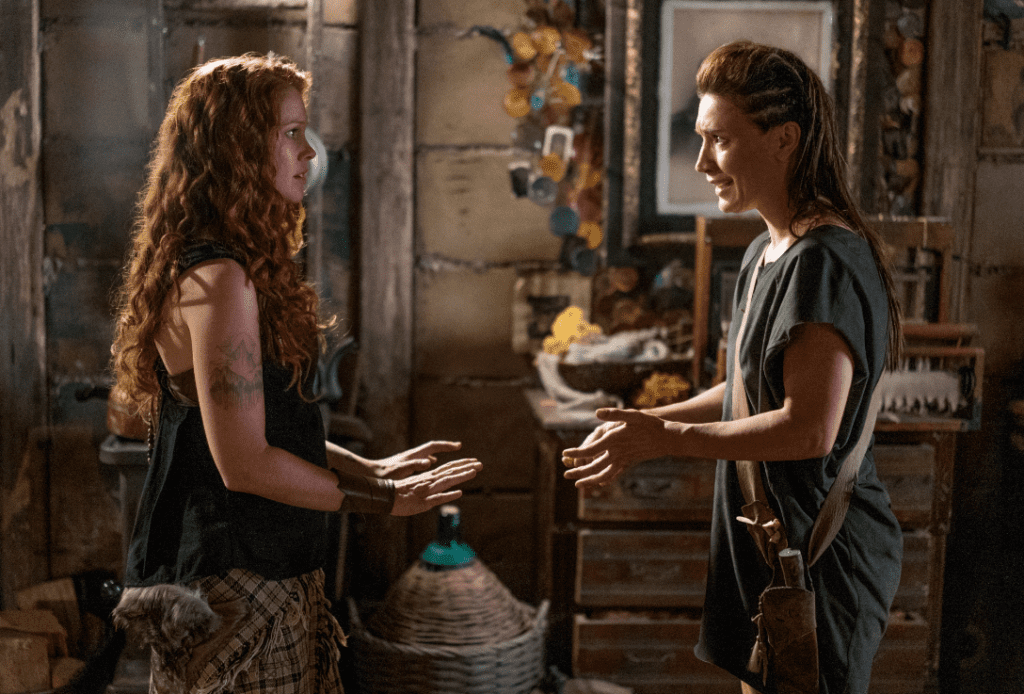 Surprisingly, Moregon confesses.  She says because guns were used to kill the game, all the meat was tainted, poisoned and polluted and Hezzy’s death was a casualty of their mission.  G’Win demands that Moregon leave her house.  Moregon tries to plead with her saying that they should preserve the mountain together but, since G’Win is telling her to leave, now the mountain must be persevere by her own hand.  That sounds like a threat!  Was that just a threat!?

Butch and Hasil go out for a little boys night and end up at some kind of underground club.  They walk through the door and, holy shit, it’s a damn Fight Club!  Hasil watches as two men fight in the middle of a massive crowd and, at the end of the fight, he sees how much money the fighters receive.  He turns to Butch and says, “I can do that.”  We know our Hasil has some fight in him but, will he be able to hold his own against these guys?

Caleb, Sheriff Houghton’s son, has a bad dream and Houghton comes running to his side.  He comforts his son and places his teddy bear into his arms but not before taking a good, long look at the toy.  It’s then that he remembers a section of the area where a wooden carved bear marks a dirt road.  BEAR!  Just like Samuel mentioned!  Houghton follows the dirt road and finds Samuel’s home, aka. the house of horrors.  He walks inside but he can barely stomach the smell.  He finds the murdered family and runs out.  While I do feel terrible for Samuel, remember, that child is the only witness to what happened in that house.  With Houghton on the hunt for the actual person who killed his brother in law, I think Samuel is going to play a HUGE part in this, possibly even leading to the arrest of Big Foster and release of Li’l Foster.  We’ll see!!

Up the mountain, shit is about to get real!  Earlier in the episode, we saw G’Win heading out of her house at night but, she doesn’t realize she was being watched by Moregon and two Kinnah.  Once G’Win is out of sight, the Kinnah sneak into her house.  What are they up to?  I don’t think any of us expected what happened next!

The next morning, G’Win goes to see Big Foster.  She tells him that Moregon confessed to the smoke house fire and that she needs his help to stand up to her.  He agrees and the two of them, along with some reinforcement Farrell’s confront Moregon.  G’Win gently orders them to leave.  Big Foster sternly and strongly reiterates the command but Moregon is not moving.  She yells out to the others and, suddenly, Kinnah appear from all sides.  The Farrells are surrounded.  Oh, AND THEY HAVE GUNS!!  The Kinnah that snuck into G’Win’s house must have raided the gun stock she had there.  One of the Farrells reaches for his knife and Moregon shoots him in the head!!  As G’Win motions to go help him, Big Foster stops her, probably saving her from being shot as well.  Moregon utters something in their native tongue and the screen cuts to black.

Let us know your thoughts on We Are Kinnah in the comments section below and, don’t forget to check out the quick preview clip of next week’s episode, also below.