Warning!  POTENTIAL SPOILERS AHEAD!  Ged GedYahself away from this article if you are not caught up with season 2 of WGN’s Outsiders!

Ok Cousins!  This episode was…  Well, I don’t even know where to begin!  Things are getting really HEATED up on Shay Mountain (see what I did there?).  We’ve got a crumbling clan on our hands.  The Farrells are divided with some taking sides against Big Foster while Moregon and the Kinnah continue to apply the pressure, possibly vying for leadership.  Sally Ann and Hasil were finally reunited (and it feels so goooooood) but, the couple, along with soon-to-be baby Sasil, have some growing up to do and some major decisions to make.  Li’l Foster is quickly becoming the next Pablo Picasso.  Sheriff Wade Houghton is battling the fall out from some alternative facts what were published in a fake news article.  Ledda has become a professional protestor and, well, then there’s the ending of the episode and, all I can say is, “WHOA!”  We’ll get to that!  First let’s start from the beginning: 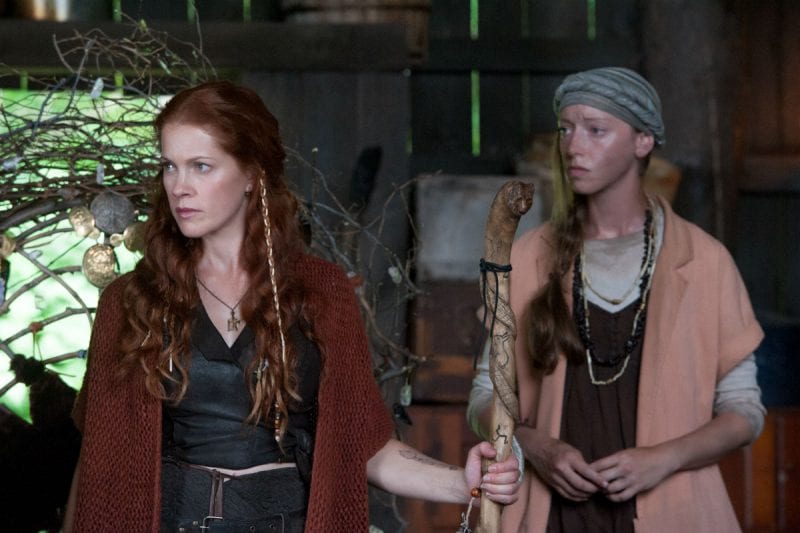 The episode begins with a gathering of the Farrells.  G’Win addresses her the group and informs them that, because she believes he has changed, her decision is to let Big Foster stay.  Krake, Shurn and others are extremely angered by this decision.  G’Win FORCEFULLY demands her word is to be respected.  Moregon reaffirms G’Win’s decision by stating that, “there is no better way to destroy a clan than to turn against the Bren’In.” The Farrells are not happy with G’Win’s decision but, they honor her anyway.  The group follows Moregon’s lead and they salute G’Win.  Big Foster also bows.

Later on, however, it’s clear that things are not all forgiven when it comes to Big Foster.  Big Foster approaches Krake in order to apologize and try to insist that he’s a changed man.  Krake doesn’t buy into it and says that, while a man can change, a monster cannot. Ooooh!  BURN!

Phelia has successfully led Sally Ann up the mountain.  They come to a clearing and, just beyond the brush is Hasil.  He’s talking a group of Farrells and turns around to see Sally Ann.  He can’t believe she’s actually there!  He takes her aside from the group and gives her a big ol’ hug.  Sally Ann tells him they have something in common now.  She reveals that she is pregnant and, it’s safe to say Hasils first reaction is one of complete shock.  At first, he can’t even find words to respond but then he tells her that his family needs him and he has a lot of responsibility up the mountain.  This upsets Sally Ann and she begins to walk away.  She reveals that she can’t go home because of her crazy, controlling brother and that she intends to abort the baby.  Hasil tells her that the child is half Farrell and is going to be born half Farrell.  All we want is for Sasil to live happily ever after!! How are they going to make this work and what’s going to happen when G’Win finds out Sally Ann is there?

G’Win is beginning to prepare for the big autumn hunt.  She calls Moregon in to thank her for her support in their gathering earlier.  Moregon tells her that they are both true leaders and she will defend her if ever needed.  At this moment, Big Foster walks in.  Moregon and Big Foster exchange some tense passes before she exits.  Big Foster tells G’Win that Moregon gives him the creeps (yeah, I think we all TOTALLY agree with him here).  The purpose of Big Foster’s visit is that he wants to go and find Li’l Foster as he feels he’s been gone too long.  G’Win tells him that he can’t leave as they are about to have the autumn hunt and he is the best hunter.  Big Foster ends up staying to help provide for the clan.  Seriously, is no one even the least bit concerned for Li’l Foster at this point? 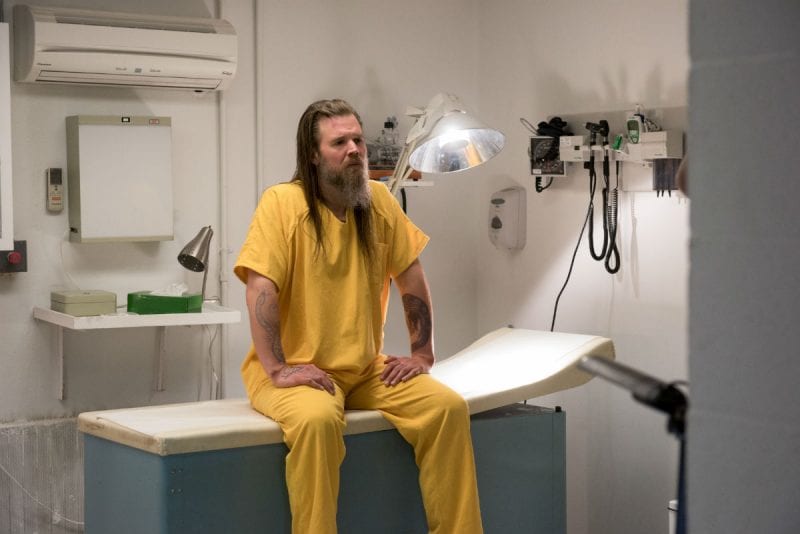 Poor, forgotten Li’l Foster is still in jail and is being examined for a concussion in the infirmary.  The doctor gives him some tips for survival in the prison system.  Keep your head down, be careful who you trust and most importantly, never forget your reason to keep on living.  He tells him to write down what that reason is and keep it close.  That will give him hope.  Li’l Foster can’t write so the doctor tells him he can draw it.  He gives him a pad and a pencil in order to do so.  Later on, Li’l Foster is in his cell and he begins to draw frantically.  He’s drawing scenes of his home; the mountain. Hang on to that vision, Li’l Foster!  We’ll get you home eventually, I hope!  FREE LI’L FOSTER ALREADY!!

Also down in the town, Sheriff Houghton stops in a local diner.  He sees a newspaper write up saying that he arrested  Li’l Foster in connection with the murder of his brother-in-law.  Houghton confronts Matt Meyers (the emergency manager) as the article is completely fabricated including a fake quote supposedly said by Houghton.  Meyers tries to sell him on the story by saying the town thinks of him as a joke after what happened when they confronted the Farrells last time. Houghton needs this false win in order to rebuild his reputation.   Houghton, annoyed by this confrontation, goes to a supply closet and cuts off his cast as that was a constant reminder of his failure and embarrassment.

Houghton’s sister, Ledda, is leading a meeting to organize a protest against the coal excavation.  At the protest things get a little rowdy.  Haylie Grimes is understandably annoyed that Ledda is leading the charge, especially since she just pulled some strings in order for the family to have health insurance through the company.  Houghton tries to break up the protest which leads to a heated exchange of words between him and Ledda.  Houghton ends up arresting his own sister.  The whole thing, of course, was caught on camera.  That’s going to lead to some awkwardness at home! 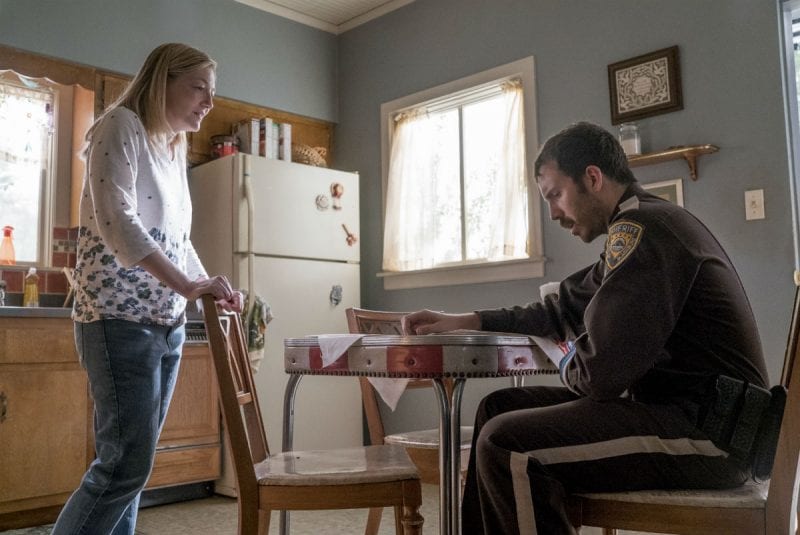 Later on, we get to see how this all plays out at home.  Ledda watches the video of her arrest online and she apologizes for not telling Houghton about the protest.  Houghton is upset since half the town already thinks poorly of him and Ledda’s actions today only helped to convince the other half that he is a joke.  They reach and understanding and appear to put the situation behind them.

Big Foster and his crew are gearing up for the autumn hunt.  Moregon mocks them for having to use guns to kill their game.  She says the Kinnah will join the hunt, doing it their way.  There’s a competition coming!  Who’s going to win the hunt?

That night, the Farrells get things started with a ritual followed by a down right awesome mountain party!  These Farrells sure know how to kick it with music, dancing and, of course, Farrell wine!  At the party, Big Foster asks G’Win to dance but she’s turns him down.  There’s a real interesting dynamic happening within the Farrell clan.  The once united and unified clan is definitely dividing.  While the party rages on, Hasil and Sally Ann lay together in a hammock, just snuggling!  Oooooh, happy day!  Love these two (or, really, these three)! 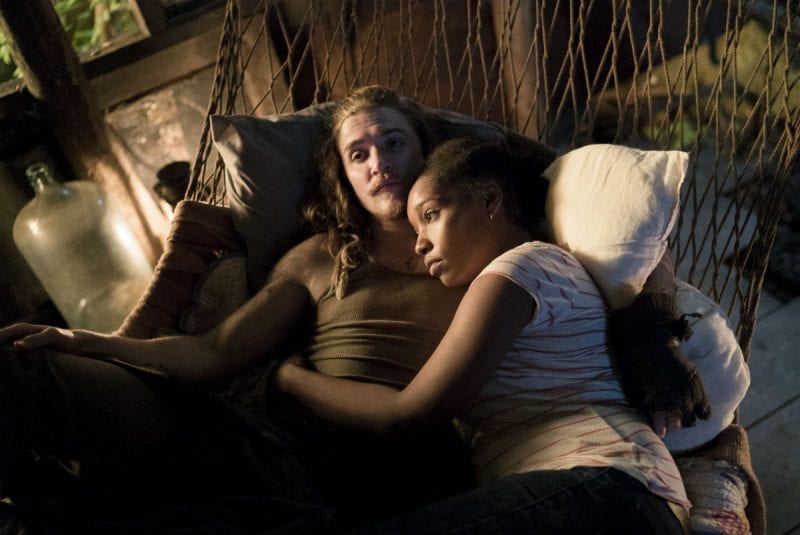 G’Win has excused Hasil from the hunt so, the next morning, he and Sally Ann start down the mountain.  Sally Ann knows Hasil is nervous but he takes her hand and they begin their journey.

The rest of the Farrells begin the autumn hunt.  Big Foster is quietly tracking while other Farrells are using the quads to round up a wild boar.  Big Foster tracks down a huge elk and he steadies himself for a clear shot.  The gun malfunctions and the elk runs.  Big Foster grabs his crossbow and begins tracking once again.  He finds the elk again and takes it down with his arrow.  Seeing that Big Foster and Moregon had clashed earlier regarding hunting with guns, do we think, perhaps the Kinnah had something to do with that malfunction?

The Farrell men did a decent job in the hunt but, the Kinnah women got double, or maybe even triple the game.  The game is taken to the smoke house to be prepared.  Hezzy is inside skinning and cleaning the game in preparation for storage when suddenly, flames engulf the house.  Someone has locked the door and he can’t get out.  The clan tries to put out the flames and save him but, it’s no use.  Hezzy, the game and the whole house burns up.  Who would do such a thing!?  Shurn accuses Big Foster of setting the fire.  Moregon joins in placing the blame.  G’Win refocuses the group saying their priority is now replacing the game that was lost.  Big Foster suggests a run into town but, two Farrells tell him that won’t work.  They confess to going into town on a beer run when a guard chased them out.  They say there is no possibility of going on a run without bloodshed.  Their only option is to hunt again.

Over at the newly constructed border fence, two security guards are patrolling, making sure the Farrells stay out of the town.  Suddenly, two scantily clad women appear as if out of nowhere.  They appear to be Kinnah.  The women remove their clothing and begin to seduce the two guards.  The women coax the two guards into having sex and, while doing so, another women appears from the darkness.  She hovers over the two guards for a moment before plunging knives through the men’s eyes.  The group of women take the blood of the men and smear it on their lips before carting off the bodies into the darkness.  WHAT….  JUST…..  HAPPENED!!!!!!???????

What do you think, Cousins?  Do we have Cannibal Kinnah on our hands?  Are they using the guards to reproduce and then using the bodies as food, kind of like their own twisted version of an autumn hunt?  What do you think?

Let us know your thoughts on How We Hunt in the comments section below and, don’t forget to check out the quick preview clip of next week’s episode, also below.