Warning!  SPOILERS AHEAD!  Ged GedYah-self off of this page if you are not caught up with season 2 of WGN’s Outsiders!

There certainly was MOUNTAINS of drama in this week’s episode.  With Big Foster back in Farrell Territory, he almost immediately clashes with the new Kinnah clan.  Li’l Foster is really using his head trying to get out of jail (see what I did there).  Hasil is throwing some hissy fits.  Sally Ann goes on the worst road trip ever and Sheriff Houghton is discovering the importance of good universal healthcare.  Let’s recap all the crazy that occurred in Banishment:

First off, Big Foster is back!  He requests a circle and G’Win agrees to allow him to speak the following morning.  Big Foster is brought to his bed to rest but first, he encounters the camp of Kinnahs.  Remember, these ladies have made themselves completely at home in his house in addition to torching his belongings.  Of course, Big Foster is NOT happy about this and makes this known to Moregon.  Could this be the beginning to a clash of clans? 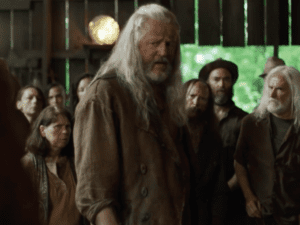 The next morning, Big Foster gets his circle.  He immediately reveals that he killed Lady Ray in order to gain control of the clan.  He took the oak in a manner impure and he knows the punishment is banishment.  He acknowledges G’Win as the rightful Bren’In and awaits a decision on his fate.

The elders agree to banishment, but G’Win has the final say.  She says she needs some time to think.  This clearly upsets Hasil and he confronts Big Foster.  Hasil says that one of the happiest days of his life was when he heard that Big Foster was shot dead.  During their confrontation, Hasil reveals to him that Asa is dead.  Big Foster seems visibly upset by this news and asks to visit Asa’s grave.

At the grave, a distraught Big Foster kneels down and says he’s truly sorry for all he had done to Asa.  When the two Farrells that are with him point out that it was Asa who tried to kill Big Foster and that he should rot for it, Big Foster sternly and angrily says, “You be careful what you say about my boy!”   WHAAAAAAAAAAAT!!??  Was Asa Big Foster’s biological son?  Does this mean that he’s the 7th??!  Mind totally blown!!

In the town, Sheriff Houghton and Ledda are having a discussion regarding her condition.  She believes her cancer diagnosis is a message from God that she has to be useful and productive with what little time she has left.  They begin to discuss costs associated with treatment.  Ledda, unfortunately, does not have health insurance since her late husband, Breece, was not employed long enough to meet the eligibility requirements.  Houghton tells her that he’ll take care of it.  But how?

Sheriff Houghton reluctantly pays a visit to Haylie Grimes seeking help regarding Ledda’s health insurance situation.  In quite possibly the most shocking turn of events in the series thus far, Grimes helps him out by adjusting Breece’s employment records, making him and his family eligible for insurance.  Whoa, right??  Haylie Grimes is actually human! 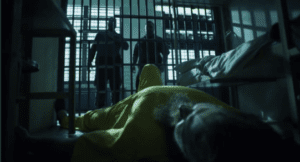 Meanwhile, Li’l Foster is in his jail cell trying desperately to break the bars.  He begins head-butting the cell door, trying to break free.  Later, we see Li’l Foster laying on the floor of his cell, seemingly unconscious.  Only he’s not unconscious.  This is all part of his plan to be taken out of the cell and to the infirmary where he feels he can finally escape.  The prison guard opens the cell door and Li’l Foster springs into action, fighting the guards. He makes a break for it and it takes about 7 guards to subdue him and strap him to a chair.

Later on in the episode, Li’l Foster is restrained in the hallway and is chanting quietly to himself.  A guard approaches him and threatens him, saying they will have plenty of time to break him.  Li’l Foster does NOT deserve this!  Why do I have a feeling that his incarceration is going to lead to an all-out war between the Farrells and the town?  FREE LI’L FOSTER!! 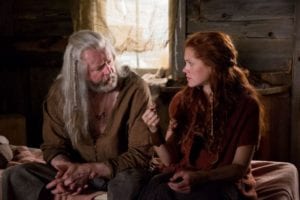 Back up the mountain, G’Win goes to speak with Big Foster.  Big Foster tells G’Win that he forgives her for trying to poison him, that she was doing it for the good of the clan and, because of that, she is the rightful Bren’In.  Big Foster admits that the power of Bren’In changed him for the worst but, claims that he’s changing now, for the better.  G’Win doubts his honesty but, he continues by saying he loves her and knows he’s not worthy of her yet.  He hopes to prove his worthiness by showing her he has changed.  G’Win leaves and Big Foster orders the two Farrell guards to gather every gun they have and to bring them to him.

Big Foster goes to visit one of the elders.  He says he knows G’Win is going to banish him and that his mother used to tell him terrifying stories about the mountain which originated from Cherokee legend about a cult of thieves, evildoers, and witches called The Kinnah.  The elder has heard those same stories but disregarded them as fairytales.  Big Foster says he fears for the clan and, though he has been disrespectful in the past, if he is able to stay, that will change.  What, exactly, is he up to?  Do we trust that he has changed??

Finally, we get to catch up with Sally Ann.  Earlier in the episode, she made a clinic appointment regarding her newly discovered pregnancy.  The closest clinic is hours away so borrowed her brother’s car telling him that she needed it in order to get to work.

While at the clinic, she is considering terminating the pregnancy.  It is early enough to term the pregnancy by taking a pill however, the medication costs $800 and by law, the clinic is required to give her information regarding alternate options (ex. adoption) and to wait 24 hours before proceeding.  Sally Ann would not be able to make this trip again and, things are not looking good for her.  Her over-bearing brother is texting her, trying to find out why she isn’t home yet.  Be careful, Sally Ann!

While we’re on the topic of medical issues, Sheriff Houghton is continuing to look into Ledda’s cancer treatment options.  He is told that her copay for treatment would be $135,000.  Houghton gets upset at the insane costs and is considering selling his house in order to pay for Ledda’s medical bills.  The whole situation is beginning to take its toll on his mental state.

Houghton stops by the drug store to pick up some ibuprofen.  Turns out, the hospital has also called in a prescription of OxyContin to help ease the pain from his broken arm.  Uh oh!  Remember, he has struggled with substance abuse in the past.  This could mean trouble for him during this stressful time!

Hasil and the patrol team are walking through the woods to retrieve the turned over quad.  Hasil, for the first time, sees the fence.  He shows G’Win the fence blocking their access to the town.  G’Win instructs him to walk the perimeter to see where it goes but to stay up the mountain and not cause trouble.  As he makes his way along the fence, he finds a gate leading to a group of construction workers and guards.  They have the Farrell’s quad!  The patrol Farrells and Hasil break through the gate and start a fight with the workers and guards.  Hasil steals back the quad and they ride back up the mountain.  G’Win is not going to be happy when she finds out about this.

Big Foster and his two Farrell buddies are locked and loaded with tons of guns.  While G’Win and Moregon are discussing Big Foster and whether or not he’s changed, he walks in, guns in tow.  He lays the weapons down in front of G’Win, surrendering them to her and walks away.  G’Win is shocked and surprised by this gesture.  She still has not made a decision regarding whether or not Big Foster will be banished.  Moregon is still trying to meddle in the Farrell’s clan business so, G’Win asks her to leave.  While G’Win is stock piling the guns away in a secret hiding place, Hasil comes riding up from his confrontation with the town’s people.  G’Win scolds him for disobeying her and going on the other sides of the fence and starting trouble.  Hasil says, she asked him to trust her, and he does, but she needs to trust him too.

Back in the town, Sheriff Houghton is discussing his plans to help Ledda pay for her cancer treatment when she drops a bomb on him.  Ledda says she’s not going for treatment.  She appreciates all that he is doing but she will not put herself and her kids through it, just to die anyway.  She says God has a plan for her and her kids and even for him.  Houghton is near tears and can hardly believe what he just heard.

Up in the bathroom, Sheriff Houghton is pouring out the OxyContin pills onto the counter.  He puts all the pills back but two.  He is about to take the pills when his son Caleb knocks on the door, perhaps just in the nick of time.  Caleb was concerned and was just checking in on his dad.  This was all Houghton needed to give him the strength not to take those pills.  He flushes the two pills and the rest of the bottle down the toilet. Thank goodness for Caleb!!!

Finally, Sally Ann is returning home.  Her brother is waiting for her and he is PISSED.  He found the pregnancy test and, right before they get into a physical fight, Sally Ann drives off.  Her brother yells that she is to never come back.  She parks the car, picks up a bottle of bleach and contemplates drinking it to term the pregnancy.  She can’t bring herself to do it.  She tosses the bottle out of the car and begins to drive.  She’s about to drive head first into a tree when the car goes off the road into the bushes.  The moth appears and, suddenly, Pheila is by her side.  She grabs Sally Ann’s hand and begins to lead her up the mountain.

Up the mountain, G’Win has finally made her decision regarding Big Foster’s banishment.  G’Win tells him that banishment is the proper punishment for what he’s done but, she feels the mountain already banished him to the house of horrors and he has come back from that.  She tells him that, though she doesn’t trust him, she will need him for what’s coming from the town’s people.  Big Foster says it would be his honor to serve her.  As G’Win is walking away from Big Foster’s house, Moregon is hiding and spying on her.  Ooooooh, girl!  We do NOT trust the Kinnah!

Things are really heating up in Blackburg and on Shay Mountain!  What did you think of Banishment?  Let us know in the comments section below!

Also, check out the INSANE previews for next week’s episode below.