Warning!  SPOILERS AHEAD!  Do not climb any further up this mountain if you haven’t already watched the season 2 premiere of WGN’s Outsiders!

Hey Outsiders fans!  Can you believe that season premiere!?  This episode was absolutely INSANE and we have SO much to talk about!  Let’s get right into it. Season 2 picks right back up where the first left off, sort of…. 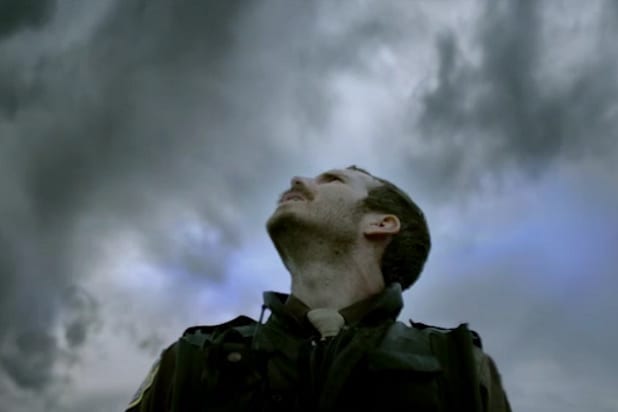 Things kick off with Sheriff Wade Houghton (Thomas M. Wright) and his deputies mid-battle with the Farrell clan up on Shay Mountain.  It’s pouring rain and the Farrells are brutally just massacring the deputies (seriously, I felt like I was watching Vikings there for a moment).  G’Win (Gillian Alexy) squares up with Sheriff Houghton, drawing an arrow directly in his direction.  She releases it and it hits him through his eye before he falls to the ground.

With that, we cut to Houghton in a hospital bed and we find out that was all a dream or a hallucination.  There was no lightning storm.  There was no battle of epic and brutal proportions.  In fact, Houghton is in the hospital because, while running away from the Farrells, he fell and knocked himself unconscious.

Back on Shay Mountain, G’Win is already facing some difficulties as the new Bren’In.  The Farrells are divided and arguing over what should be done regarding the coal company.  She orders the clan to stay up on the mountain as that is the only way to ensure safety.  This does not sit well with the group.

She tells Li’l Foster (Ryan Hurst) that he needs to go on a mission to find the missing body of his father, Big Foster (David Morse).  He begins to search the mountain and, using his tracking skills, finds himself face to face with a hunter from the town.  The hunter says he respects the Farrells and means him no harm.  In fact, he offers a suggestion that, perhaps the body is in the hospital in town, or the morgue.  He offers to give Li’l Foster a ride to go check it out.  Li’l Foster accepts.

Meanwhile, G’Win goes to the box cell to confront Asa (Joe Anderson) and finds that he has escaped (remember, the girl in white dress with the butterflies dropped a key into his cell in the season 1 finale).  She breaks down and, while taking a moment to compose herself, she looks up and sees three wolves.  After a brief stare down, the wolves walk off.

Asa has, in fact, fled the mountain.  He is wandering throughout the woods and finds himself on a road with a bridge.  He stops briefly and takes off his vest, bracelets, side knife and necklace and tosses them all off the bridge.  He has officially denounced association with his family.

Sheriff Houghton, who has become the laughing stock of the town, walks into work to find Haylie Grimes (Francie Swift) from the coal company chatting it up with Matt Myers (James McCauley), an Emergency Manager appointed by the governor.  Houghton and Myers immediately clash.  This is certainly going to be trouble in the future!

Despite G’Win’s mandate that the Farrells stay up the mountain, Hasil (Kyle Gallner) begins to wander down, heading towards town.  He finds Sally Ann (Christina Jackson) and tries to apologize for everything that happened with his family.  Still angry and shaken, Sally Ann will not accept any excuses.  She wandered around the mountain for two days and could have been killed, either by animals or his family. She has also lost her job because she was away with him and she tells Hasil that she never wants to see him again.  Side note: I don’t like this.  I don’t like this one bit!  Sasil 4eva!!!

Later on in the episode came a major reveal!  Sally Ann is in the bathroom at her home.  She walks over to the counter and picks up a pregnancy test… excuse me, a POSITIVE pregnancy test.  While we love the idea of a little Sasil running around, Sally Ann is clearly in a panic.  She runs outside for air and finds a wooden carved bird on her front porch which Hasil had left for her.  Oooh, THE FEELS!!

Hasil, who has once again found his way back to Shay Mountain, meets up with G’Win.  She seems suspicious so, he tells her that he was just out searching for ginseng for her coronation badge, for when she officially takes the oath as Bren’In.  G’Win tells Hasil that she doesn’t want him going into the town, his place is here, on top of the mountain.  Hasil assures her that he’s made his choice and he isn’t going anywhere, ever again.  RIP Sasil!

Li’l Foster is still road trippin’ along to town when the hunter says they need to stop off a local bar to visit a friend quickly.  While the hunter is inside, one of his drinking buddies recognizing Li’l Foster as a Farrell and, well, all hell breaks loose. Patrons from the bar spill out into the parking lot and confront Li’l Foster who says, “we’re all friends here.”  A man responds, “I ain’t your friend!” and a fight ensues.  Li’l Foster really does some ass kicking and just before he’s about to stab a man, Sheriff Houghton shows up and orders him down to his knees with his hands behind his head.  Li’l Foster kneels down, smiles, and points at Houghton as if he recognizes him and is mocking him from his stellar performance up on the mountain (cough cough, we’re being sarcastic).  I’ve got to say, Ryan Hurst KILLED IT in this scene.  I can remember seeing this back in October at New York Comic Con and, man, did that panel room erupt with cheers when they showed us this part.  You rock, Ryan!

So, Li’l Foster is brought down to the sheriff’s station.  Houghton sits with him and just can’t pass up the opportunity to ask about his brother-in-law, Breece Dobbs.  Li’l Foster straight up tells Houghton that it was his father, Big Foster, who killed his brother-in-law however, his father is also dead.  He tells him it was Asa who killed him.  Houghton believes Li’l Foster and sees him as being an honest man however, he decides to keep him in custody for the time being.

We catch up, once again, with Asa who has made it to town.  He breaks a window of the convenient store and robs the cash register before walking out.  Simultaneously, as this is happening, we see G’Win lying in bed.  She slowly wakes up to see a vision of Elon, Big Fosters dead son, standing in her room.  She calls his name and he turns around and motions to the staff and necklace before he walks into the darkness.  He is signaling for her to take the oath and become Bren’In.  She decides she will take the oath that night and begins to rouse the elders to do so.

Up on the mountain, the elders have been gathered and G’Win is taking the oath to officially become Bren’In.

Asa is wandering around a rail yard when he sees the three wolves; the same three wolves which G’Win saw earlier.  As Asa begins to walk away, the wolves block his path.  After an intense stare down, he backs away and turns around but, they begin to follow him.  He stops and turns around to confront them.  The wolves are growling and snarling at him.  Asa kneels to the ground before them just as one jumps, sinking his teeth into his neck.  The others join in and begin to rip him apart.  Oh NOOOOOOOOO!  RIP Asa!

The episode ends with a random elderly woman preparing soup.  She makes her way through a rundown house and gives one bowl to a man watching television (her husband, maybe?) and has one bowl left over.  She brings the other bowl into the basement where a person lie in bed, completely covered by blankets.  She asks if the person wants anything to eat and, as the covers slowly move back, it is revealed that Big Foster is the one in the bed, ALIVE!

Buckle up, buttercups.  This season is off to a whirlwind start and it doesn’t show any signs of stopping.  What did you think of the season 2 premiere?  Let us know in the comments section below!

Also, check out the previews for next week’s episode below.  Outsiders airs Tuesdays at 9pm on WGN.