Well, I believe on the streets they would refer to this weeks episode of Orphan Black as a bit of a game changer. Damn. That was a fine hour of television and this seasons best since the premiere. Maybe that has to deal with how closely related these two episodes are or perhaps because a ton of loose ends were tied up, but either way “The Scandal of Altruism” is one of Orphan Black’s finest. The whole time I was watching I had to keep reminding myself that this was not a a season finale despite how heavily the episode tried to convince me otherwise.

After last weeks proposed deal of swapping the DNA of Kendall for a cure and the removal of one maggot bot it was obvious that the Clone Club had some very difficult decisions to make. For starters, is one person worth the greater good. Not only just one person but a person who is dying with leukemia and happens to be the mother of one of your best soldiers. Yes, that complicates things a bit but I have never been a fan of the Kendall character so I thought that decision was pretty easy. Don’t get me wrong, I appreciate what she represents but she never clicked with me. Her scenes this week (outside of the ending) that were supposed to ring emotional (thinking mostly of her stuff with S) didn’t do anything for me. As a a matter of fact I thought it was more emotional watching Cos and Steve agree to hand over their data. That scene held actual weight because there were three and half seasons of info on that hard drive. 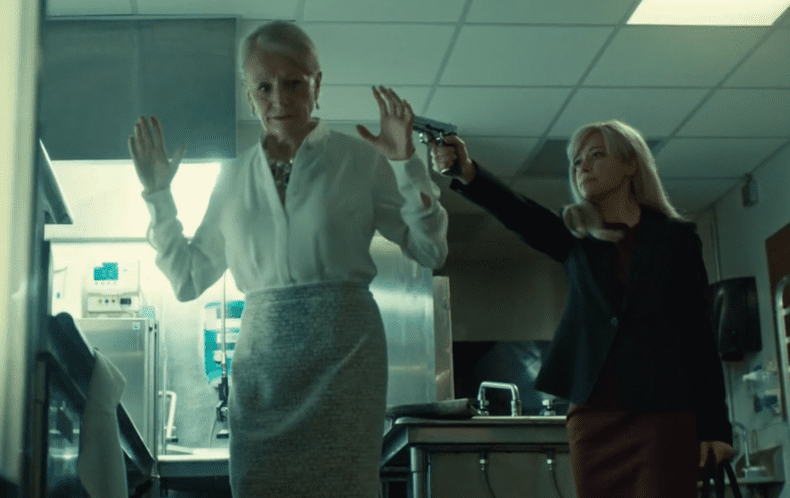 Before we go into the chaos that dominated this episode it was nice to finally get some clarity on what Beth was doing the night she put on the blonde wig. It looked like she was off to kill Susan Duncan because she held her responsible for the illness, the monitors, and all the watching of the Clone Club members. Beth tracks her down at some swanky party, partakes in spilling something on her, and then ambush in the bathroom. It was here that Beth has her first, and only, interaction with Duncan and things get a bit heavy. Beth makes Susan get on her knees, I don’t care how swanky a party it is that’s still a public bathroom which makes that all types of gross, and is going to do this assassination style. Susan pleads for her life and implies that she’s not the enemy, that she loves all of them. She even said she was at Beth’s police academy graduation.  The pleading works as Beth pulls a ghost and just vanishes from the bathroom leaving Susan in need of buying a new dress. #publicbathroomsaregross
Now that we know that Beth didn’t kill Susan (duh, she’s been very alive every time we see her) it begs the question of whose blood was that on her hands, and we’ll get there but let’s focus on the present. Obviously the Clone Club agrees to give Kendall’s DNA for the cure. Cos is dying and is running out of time to find the cure herself and Sarah has to get rid of that maggot bot. It seems like an obvious choice. Cos and Steve copy all of their data on to a Bright Born hard drive (which would prove to be a mistake) and bring Sarah over for the maggot bot removal surgery to be preformed by Evie Cho.

In the mean time Scott is handing over all of Kendall’s blood samples to Susan Duncan, and everyone is super happy with the agreements that were made. Well, except Ira who learns that he won’t get a cure and his super gross/creepy relationship with Susan will probably come to an end. I will admit that I felt for our Castor clone here a bit because he does n’tseem to be such a bag of D’s unlike his brothers. Finding him in the bathtub having taken all those pills was upsetting. 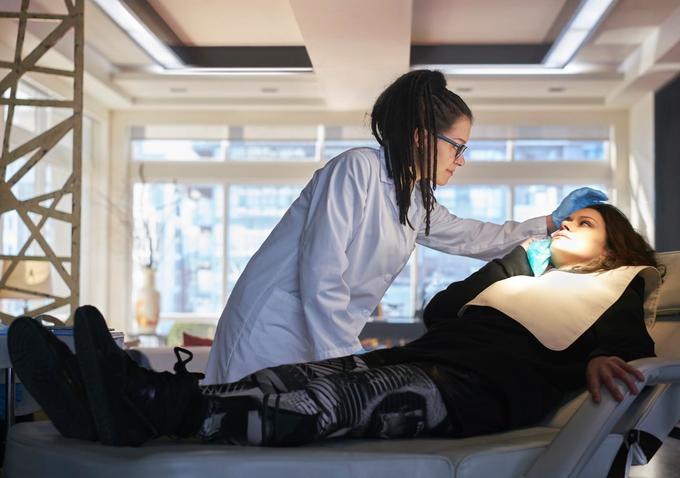 After Scott (Steve? Sorry it’s one of my favorite Lost jokes) has what he needs from Kendall she is taken away, only to get kidnapped because why would you trust these people!!! Sarah has her maggot bot removed in a pretty tense surgery that could have gone poorly if Cos wasn’t there. We also learned that the bots serve different functions and that Sarah’s was there to make her sick. Unfortunately for the bad guys it never figured out how to do that so Sarah stayed alive. Don’t you hate that when your worm based bio weapons can’t find the simple solutions they were intended for? Why wouldn’t that thing be rigged to a timer and just blow up in her mouth? The surgery proved that whatever it bleeds is toxic. Maybe I should be the head of an evil, science/gene advancing corporation… hmmmm

I digress, post surgery Sarah discovers that Kendall has been kidnapped (pack of smokes in a pool of blood, 1+1= kidnapped Kendall) and spoils all of the samples. All. Of. Them. Granted at the time I’m sure she was optimistic that they would be able to get Kendall back but this ends up being a terrible move. Especially when later on Scott calls and says there’s a virus ripping through all their data that must have come from the Bright Born hard drive. Those bastards! Everything here was a set up.

Cut now to some creepy plot of land surrounded by corn (or was it just high grass) where Neo Cop has Kendall tied up, and enter or big bad of the season…Evie mfn’ Cho. That’s right she’s been playing everyone apparently and wants all this Clone Club stuff wiped away. We learn that it was Evie who put Beth on to Susan, and it was her blood on Beth’s hands as she got the crapped kicked out of her. Evie is in the strong belief that the evolution of science and people isn’t in cloning but in the genetically modifying of babies, you know all that really gross, doesn’t always work Bright Born stuff. She has Neo Cop kill Kendall and set fire to all the remaining data and DNA stuff while Cos watches. It was brutal. Then in a true Walter White moment Evie tells Cos that Delphanie was shot and killed in a garage. If you wanted Evie to be the big bad this definitely helped get that over. 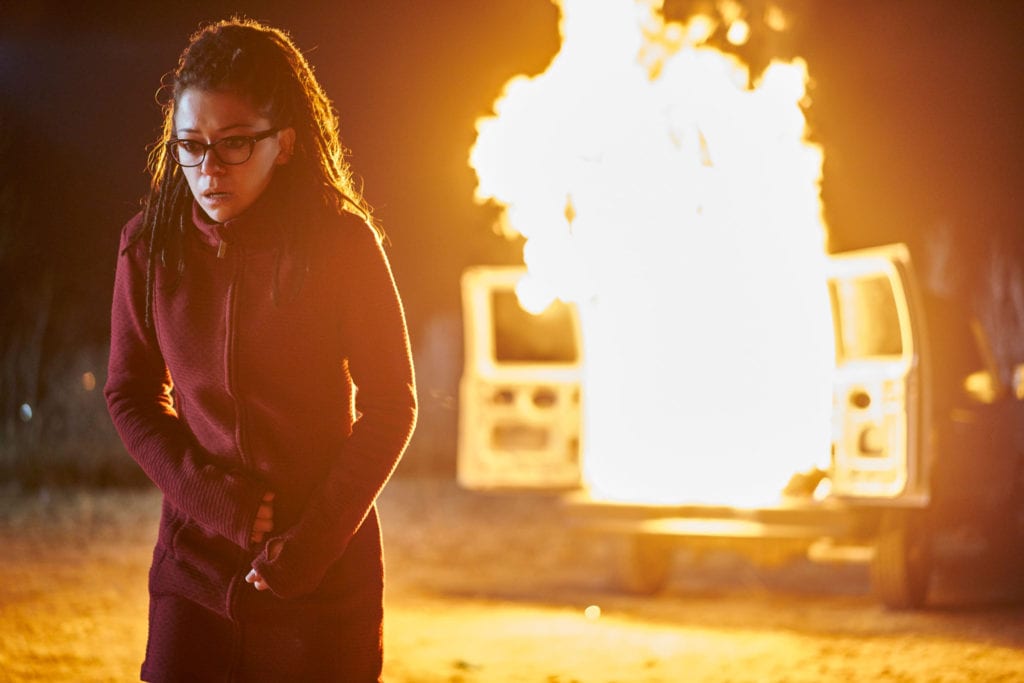 And ugh credits. Just a fantastic episode of Orphan Black that pretty much hit the reset button on the entire season. The Clone Club is left with nothing and it was more then just Kendall that we saw die out in that field. With no data or DNA samples to test one has to believe that Cos is living on borrowed time right now, and the rest of the sisters could be too. There is nothing to prevent the impending illnesses. Evie Cho drops the mic and takes a train to some where, and we’re left wondering if the Clone Club could possibly recover from this.

There you have it Geeklings! That was one hell of an episode that has me all pumped up for the back half of the season. It’ll be interesting to see how the Clone Club picks up the pieces here. Especially when you consider that this episode only focused on Sarah and Cos. How will this all effect Alison and Helena is yet to be seen. I totally dug the finale feeling of the episode and how the landscape has completely changed. When Orphan Black comes back next week the board will look a lot different. What do you guys think? Let it rip in the comments below.