Geeklings, let me tell you about this review. First things first I know that it is waaaaaay late but there is an explanation I swear. I had trouble logging into the site over the weekend but I had typed up the review separately to post when I could get on. Super smart, right? Well that some how was stolen by an angry group of hard drive gnomes (I assume) and can no longer be found #harddrivegnomes. It was annoying but not then end of the world. I signed in yesterday with the hopes of re-writing the piece and getting it to your eyeholes. As I was half way through my computer just re-started, without warning, and I lost everything I had written…again. Needless to say I stepped away for a bit and wondered if I’d even get this review to you guys. Today is a new day and I like our odds, so before the computer gods try and prevent this let’s break down last weeks episode. 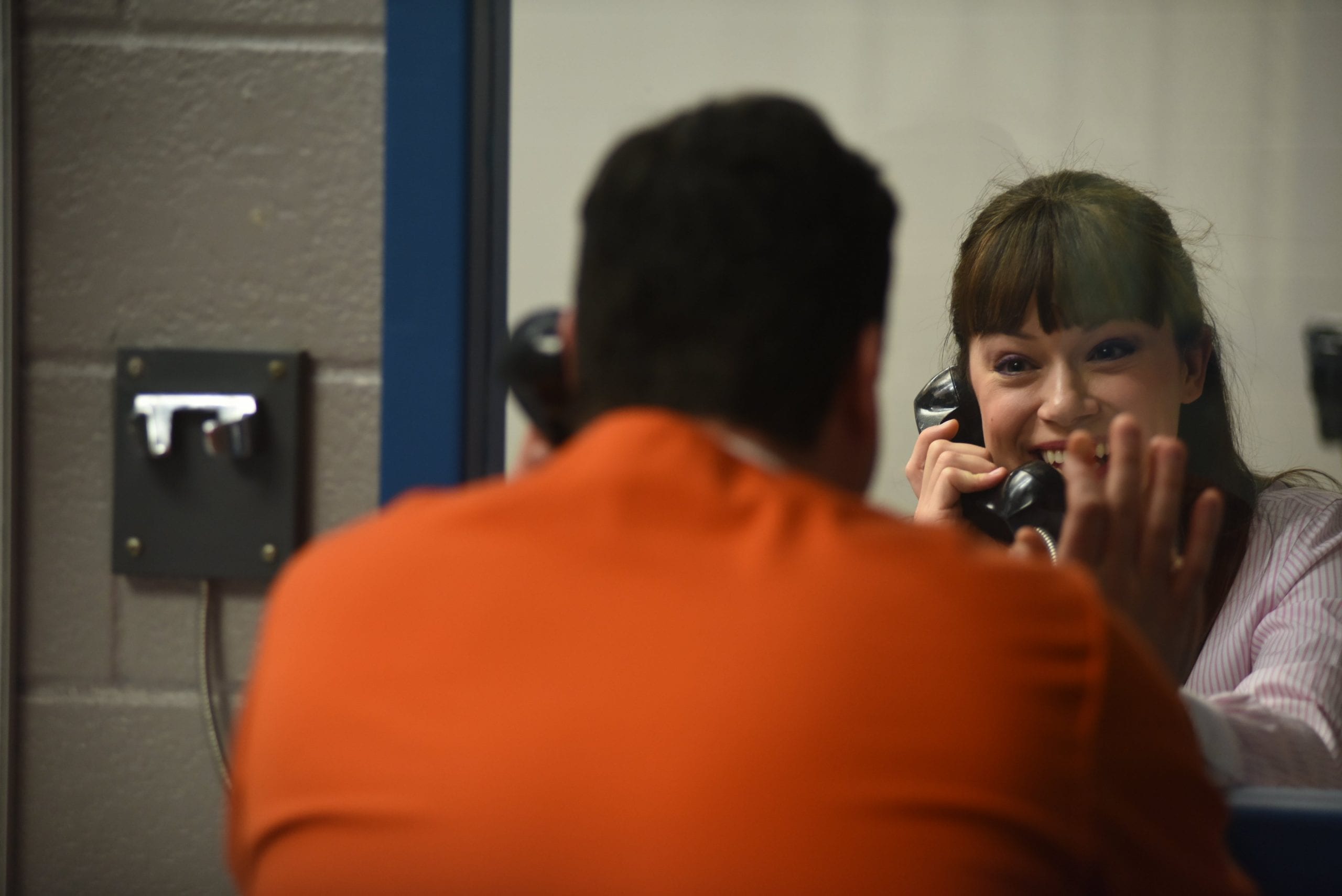 This week started off with Donnie in prison and it was just as awkwardly awesome as you thought it would be.Donnie has really grown to be one of my favorite characters on the show, and I love how after all this time he still doesn’t understand how to play the game. I suppose it’s part of his charm, but most of us should know that bragging about your “alleged” crimes on your first day of prison should be a big no-no. Donnie apparently has not watched enough Orange Is the New Black and immediately gets himself in trouble because the Neos have plants everywhere. Nice job Donnie!

Granted Donnie’s jail stint gave us uses for Adele (rumor has it she’s a lawyer, or sort of is) and allowed us to actually question Alison’s loyalty. Ever since we’ve met her there has been little doubt that Alison has been committed to the Clone Club but her family has always come first. Granted, she sees the rest of our crew as family but they still fall second to her kids and Donnie. Our Neo Cop (Dooku) uses that knowledge as a way to put pressure on Alison to give up Sarah’s location. One thing is clear, the Neos believe that if they can take Sarah out then the rest will be a cake walk, and honestly they’re probably correct. Ghost Beth went so far as to tell Sarah to be their leader, and she’s kind of been in that role for awhile now.

Alison and Sarah haven’t really been on the best of terms this season (I believe the last time they were in communication the term “bitch” was used…eeeep) and the fact that Dooku was threatening Donnie’s safety was enough to give us a little bit of doubt in Alison. Alison really does have a lot to lose as she’s a very prominent figure in her community and has children. Yes, Sarah has Kira (the demon child) but that kid hasn’t had a regular existence ever. While our fear that Alison could flip was justified it was also unwarranted as she played Dooku into a trap at my favorite comic book shop. What followed might be the best “Jesus Christ Superstar” montage I’ve ever seen as Tatiana Maslany killed it in show tune mode as Donnie got beat up in his jail cell (don’t worry he was fine). Actually, it could be the only “Jesus Christ Superstar” montage I’ve ever seen. 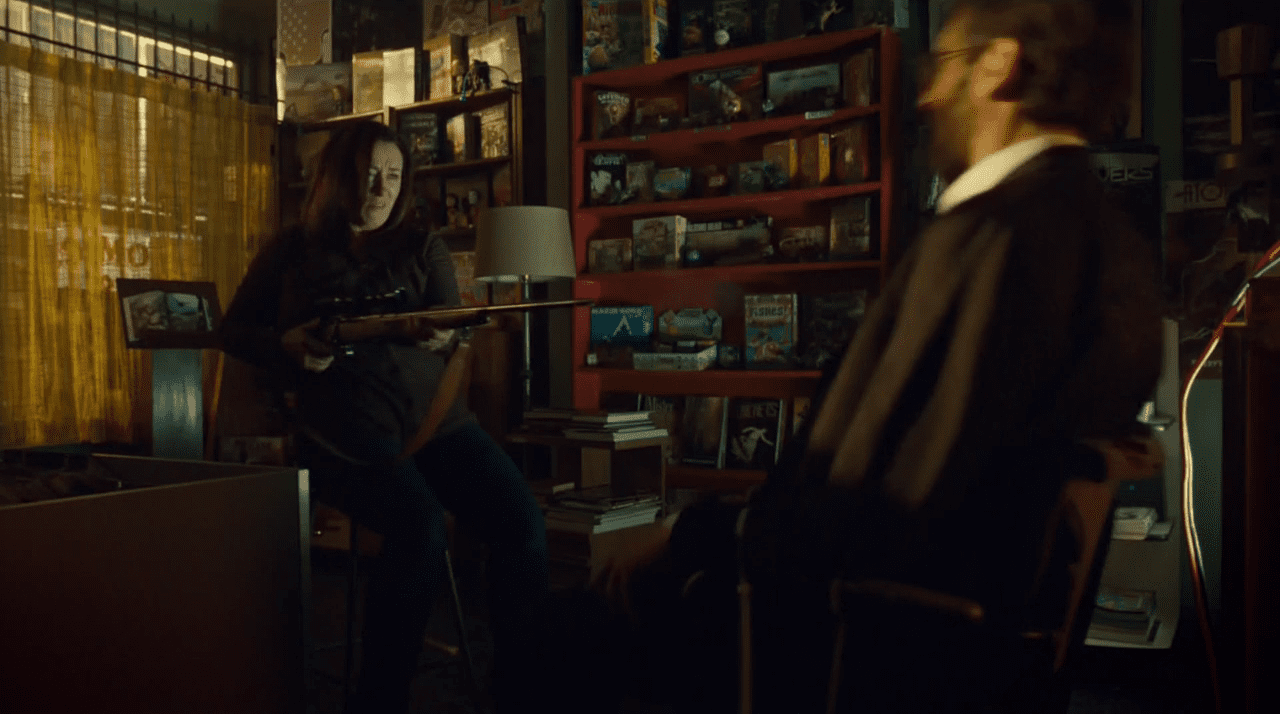 The trap in the comic shop works out pretty well as Dooku wasn’t very hard to break. Well, they did strap a car battery to his… like I said he wasn’t very hard to break. The gang gets their answers (Evie wants them dead… well duh) and Dooku even offers his services to the Clone Club claiming that the Neos are threatening his niece, but I wasn’t buying that, and either was S as she put a hole right through his chest. Sweet Jesus no S, think of the comics! And just like that the Neos are down one solider.
Elsewhere MK is back in our lives as she tells Cos and Sarah that she’s been spying on Susan Duncan and learned that the Neos have a hit squad out on them. This brings about a virtual meeting between Susan, Sarah, Cos, and Rachel (“Yo Rachel”). Cos is willing to work with Susan (along with everyone’s favorite science buddy Scott) to help find a cure, but doesn’t trust Rachel so she gets the boot. I can’t really blame Cos here. Also what the hell is up with Rachel’s eye?! Seriously. Digital swans and then angry priests? I think her Terminator eye is defective. Or possibly someone is trying to communicate with her? But who? Could MK have hacked her way into Rachel’s evil eye? Just ideas.

Any way Cos and Susan agree that in order to have a solid basis for finding a cure they’ll need a pure sample and decide that stem cells are the best way to do that. Since Sarah is the only one who has actually carried a child she becomes the leading candidate, but this puzzled me. Am I the only one who remembers that Helena just buried a whole thermostat of embryos in the Hendrix backyard? I’m not entirely sure if these are what they’re looking for (because you know…science) but it seemed like a good way to introduce Helena back into the story. She has been sorely missed. 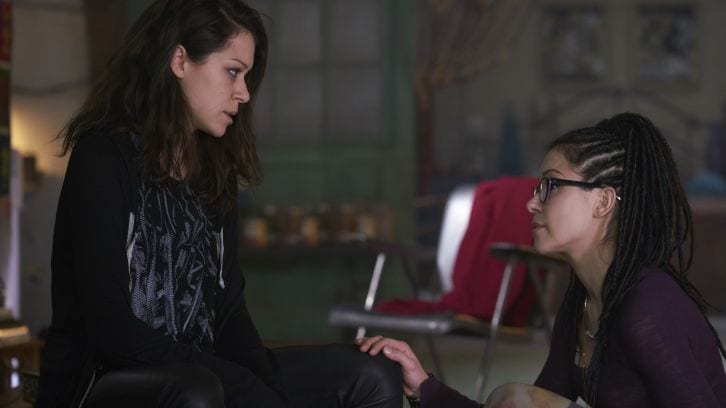 Episode ends with Cos on her way to Duncan’s compound getting her mad scientist on and hopefully find a cure, and it looks like they’re going to need one because we learned that MK has the illness too. Seriously?! Why are all my favorite clones getting the illness. I worry that since none of our main characters have been killed off by the illness that MK is going to be our sacrificial lamb (see what I did there? Cause of the mask?).

There you have it Geeklings, again sorry it’s so late but it’s right on time for tomorrow’s Orphan Black preview. What did you think of this episode? With only two left where do you think the show is heading? Will a cure be found or maybe Delphine? Can we trust Rachel or Susan? The comments are yours. See you all tomorrow.