Sweet baby Jesus! Is it me or are the titles to this season getting longer and longer? I mean granted it’s not a massive title to type up but it’s just a mouth full. I digress.

Last weeks Orphan Black was a bit on the “meh” side. One of those episodes that you can take or leave I suppose, which was disappointing considering how well the season started. Every season needs a filler episode or a minute to hit the pause button and provide some information, but the strange thing was I felt that last weeks episode didn’t even do that. Yeah there were some interesting things like the return of Ferdinand and how Rachel is communicating with him, and Kira’s ability to have day dreams of the possible future? After a week I’m still not entirely sure if I’m digging that possible avenue but am willing to see what the show does with it. I’m a patient man, what can I say? On the whole last week didn’t progress things too much. The maggot bot is still living it up in Sarah’s cheek and the we are no clearer
on Beth’s role in things. Which leaves the question: What do we have in store for this week Geeklings?

Right off the bat the return of MK is much appreciated. Since our favorite character on TV that wears a sheep mask (sorry Wyatt family) emerged this season she has brought a layer of cryptic information and intrigue that has helped add to the tension of this season. Based off this trailer it seems that MK had a twin sister perhaps (the red/blonde in the picture?) or at the very least, another clone she was super close with. I would imagine that her death caused MK to go into hiding or resulted in MK faking her death. This leaves us to question who this clone in the picture is and why does she have MK saying, “never forget”. Any time anyone says that, you know there’s some intense revenge
plan not too far behind. Also, bombs made out of C4 are always best for revenging. Have to imagine that it’s intended for the Neos. Hopefully this week will crack at the mystery that is MK a little more but not give a way too much. I’m digging the intrigue.

Who did Beth kill?!?! Doesn’t look like Beth is present in the trailer, but I wanted you guys to know that I haven’t forgotten about Ms. I Went Out In A Blonde Wig and Came Home With My Hands All Bloody and My Nerves All Shaken. Maybe I’m making this mystery bigger than it is, but I’m a curious guy. I want to know these things.

Speaking of things I want to know about (holy effortless segue Batman!) what are Donnie and Felix up to? I’m not a huge fan of Felix’s current story, as it reeks with the writers not knowing what to do with him, and I’m hoping the Donnie distraction can pull him away from that a bit. Plus if Donnie’s involved it’s got to be entertaining. Maybe he can explain how he killed Leekie again because I don’t think that explanation will ever get old. Or maybe we can stick to simpler things like why he seems to be in pain in a bathroom. Kidney stones?

Not present in the trailer but just a word of advice to characters on the show. Keep any and all fire devices away from Cos. Apparently the demon child with the dead eyes thinks she’s going to set fire to Sarah which could cause a rift in the Clone Club. My guess that this fire that Kira is seeing is some how related to removing the maggot bot, but who knows, maybe Cos will make a full heel turn and just randomly set Sarah on fire (yes, I am aware that that’s the second wrestling reference this column. What’s worse, me making them or the fact that you
understood them? Think about it).

Sarah still has the maggot bot in her cheek and now knows that Professor Duncan (the lady version/Rachel’s mom) is alive. What she does with that info is yet to be seen. It appears that Ferdinand is back and might have more information to share if Sarah gives up her contact
(*ahem* MK *ahem*). We know that he hates the Neos but he’s also getting his information from Rachel. It would be safe to question his
loyalties here. Didn’t him and Rachel have that weird sex relationship too? Quick! Purge that from your memories! Ahhhhhhhhhhhhhhhhh

Alison and Helena are also absent from the trailer which leads me to believe that this episode might focus mainly on Sarah and MK
or what they’r doing is so important that it couldn’t even be shown in the trailer. I’m going with option C which is they will be a regulated to a minor role this week. I’m sure the police weren’t at all suspicious after questioning the Hendrix family, and Alison might find herself in a bit of a pickle. Nothing a bit of dancing couldn’t fix.

There you have it Geeklings. Hopefully Orphan Black will bounce back this week and build more off the tension and conspiracy from the first two episodes. The inclusion of MK pretty much guarantees that conspiracy won’t be too far behind, but could we learn more about Beth? In the mean time why not look at this picture of Tatiana Maslany and R2D2. It is National Star Wars Day after all, and
Tatiana Maslany is the Star Wars actress we deserve (just not in Rogue One apparently #angryemoji). See you guys either late Friday or some point Saturday with the review. How about that for a time frame? Happy viewing! 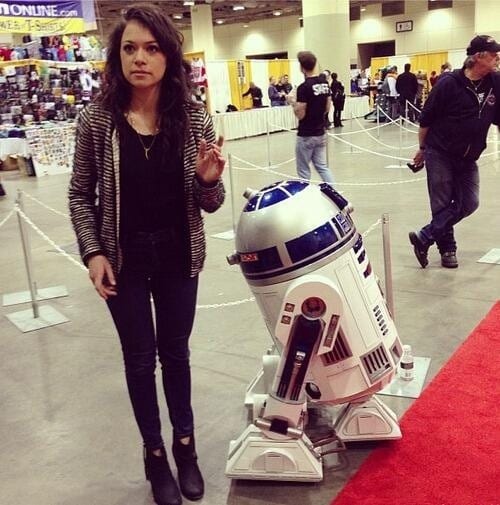