The magic of Deadpool lies in the small details. From the fast-paced dialogue packed with humorous references to the blink and you miss them Easter eggs, Deadpool knows how to make a film fun on a variety of levels for audiences. Well, on the commentary for Deadpool 2 both Ryan Reynolds and his co-writer, Paul Wernick spoke fondly of one Deadpool Easter egg they were proud to have in the film and wondered if any fans caught the reference. So, let’s see if you did!

In the first Deadpool when Wade is getting ready to leave for his final battle against Ajax, he says goodbye to his roommate and my all-around hero Blind Al:

[row]”If I never see you again, I want you to know that I love you very much, and also there’s about 116 kilos of cocaine buried somewhere in the apartment. Right next to the cure for blindness.”[/row]

Well, flash-forward to Deadpool 2 after Vanessa’s death when Wade is on a suicide bender, he goes to Blind Al’s apartment to his secret stash where he collects a brick of cocaine, but right next to it amongst other things is the cure for blindness. 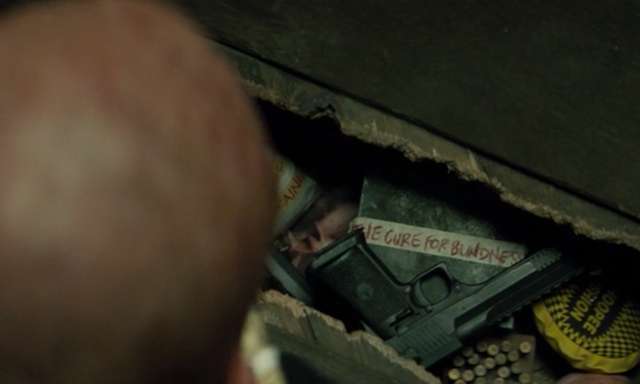 Deadpool 2 provided all sorts of fun references for X-Men fans as well, including this deleted scene below featuring Wade Wilson in peak dad-mode in the mansion. Check it out!

You can catch and listen to the audio commentary and more with the Deadpool 2 digital release that’s now available as well as the extended version called “The Super Duper Cut.” The movie will be available on DVD on August 21st.

Did you catch the Easter egg? If so, Ryan Reynolds would be proud!