1. Fans that looked into the bible verses hanging in Gabriel’s church were in for a treat. 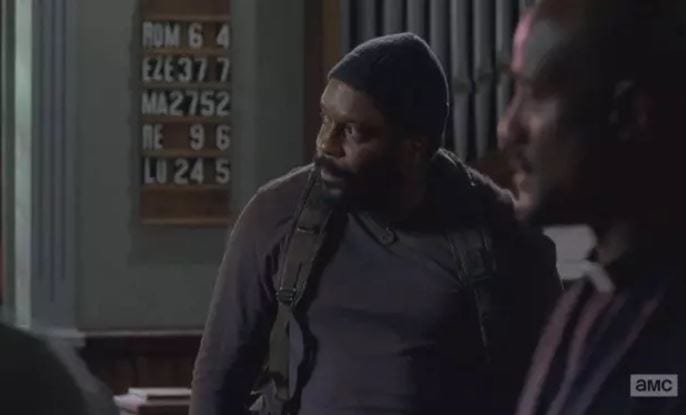 “Therefore we are buried with him by baptism into death: that like as Christ was raised up from the dead by the glory of the Father, even so, we also should walk in newness of life.” –Romans 6:4

“So I prophesied as I was commanded: and as I prophesied, there was a noise, and behold a shaking, and the bones came together, bone to his bone.” –Ezekiel 37:7

“And the graves were opened, and many bodies of the saints which slept arose.” –Matthew 27:52

“And in those days shall men seek death, and shall not find it; and shall desire to die, and death shall flee from them.” –Revelations 9:6

“And as they were afraid, and bowed down their faces to the earth, they said unto them, Why seek ye the living among the dead?” –Luke 24:5

2. As well as the writing above the entrance 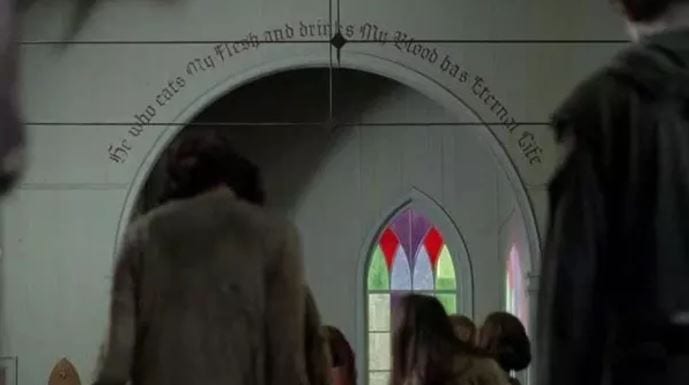 “He who eats my flesh and drinks my blood has eternal life.”

3. Turns out that Beth encountered Lucille long before we all did 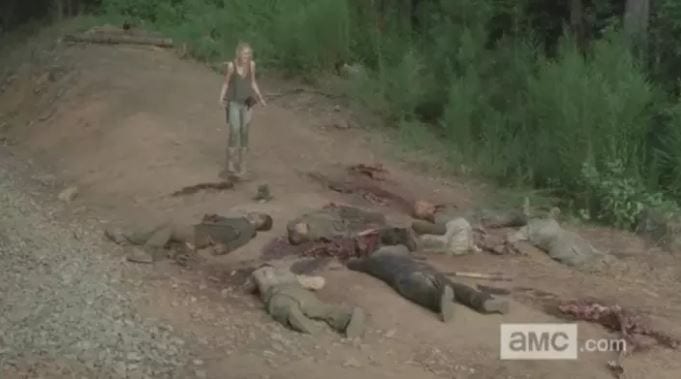 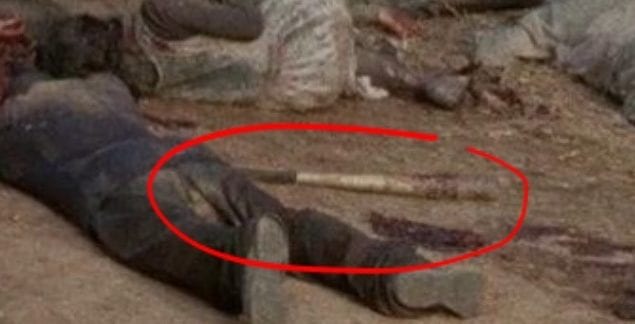 After everyone scattered after the prison in Season 4, Beth stumbles upon a pile of the dead and in the middle of them is a bat wrapped in barbed wire, which is Negan’s choice of weapon. It was a nice fake-out for fans who were eagerly waiting for the infamous villain to enter the scene with his beloved Lucille.

5. But did you catch this second Breaking Bad crossover?

6. Nothing better than a blink-and-you-miss-it foreshadowing 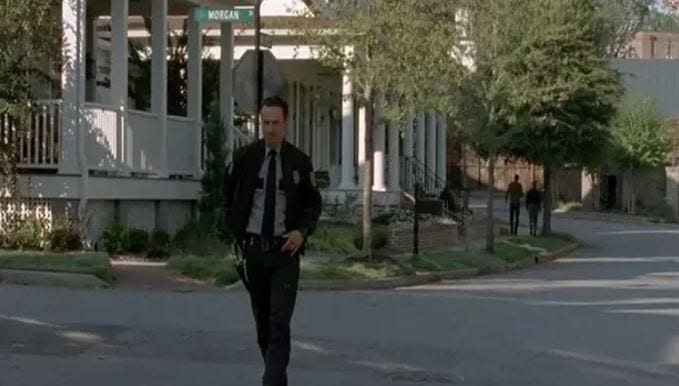 Some viewers were quick to notice that Alexandria had a street named Morgan before the character made his return to the series. 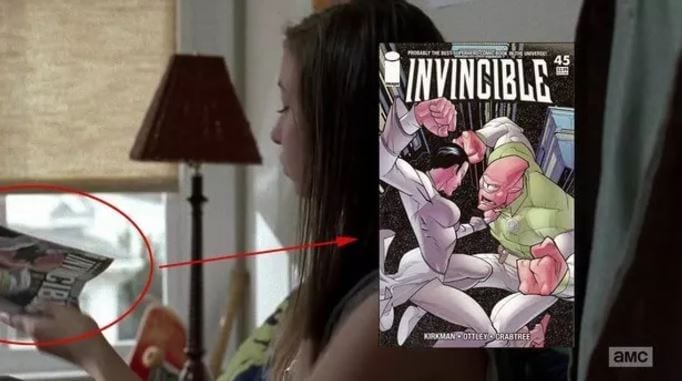 Robert Kirkman, The Walking Dead comic creator, had another comic book appear within the show based off his other comic. His hit comic, Invincible, has appeared on the show.

Oftentimes, clocks on the show will reveal what season and episode is taking place.

“Every episode that we shoot we adjust the time on the watches and the clocks to whatever episode it is we’re shooting,” said Greg Nicotero.

9. Did you recognize that velvety British voice? 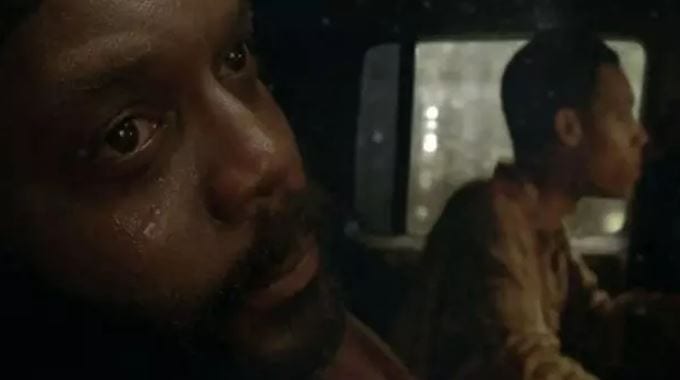 During Tyreese’s hallucinations in the Season 5 midseason premiere, an English accent is heard over the radio. That voice belonged to none other than Rick Grimes himself, Andrew Lincoln. Here’s what he read:

At least 68 citizens of the republic have been killed in four deadly attacks along the main coastal district. The group has continued their campaign of random violence, moving across the countryside unfettered with the republic’s military forces in disarray.

…then terrorizing the village by night, carrying out revenge attacks involving hacking innocents with machetes and, in some cases, setting them on fire.

There have been troubling reports of cannibalism having broken out in refugee camps along the republic’s transportation corridor. And despite the string of victories by rebel forces, there are disturbing reports of increasing the brutality of their tactics including the wholesale destruction of villages, burning down local prisons, targeting of civilians, and even the widespread mutilation of children and young mothers. And this seems like only the beginning of their campaign that they label as an endless war against…

10. Got to love when The Walking Dead play homage to the greats. 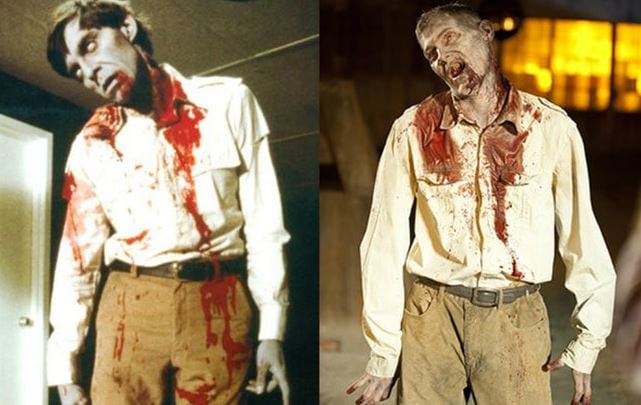 The Walking Dead is full of references to the work of the great George A. Romero. In Season 3, “Flyboy” from Dawn of the Dead pops up in Woodbury. 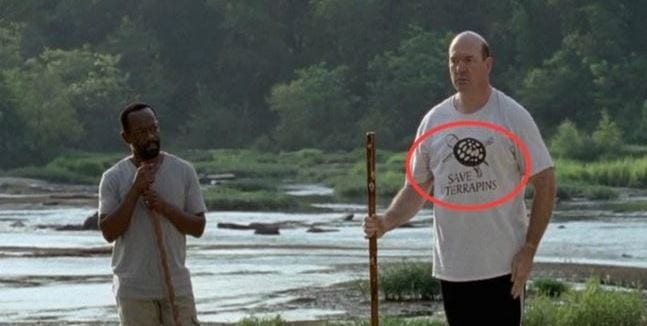 A couple here with this one. While training Morgan during Season 6, Eastman wears a shirt that says “Save The Terrapins”. Earlier that season we saw Enid kill and eat a poor innocent turtle, but it helped her survive so we will let it slide. Also, Eastman’s name is a nod to Kevin Eastman, the creator of Teenage Mutant Ninja Turtles.

12. Aye, is that Captain Jack Sparrow? 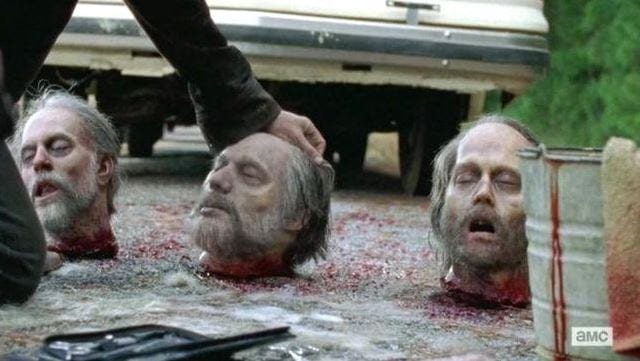 Did you happen to catch a familiar face during Season 6? Well, turns out that The Walking Dead actually used Johnny Depp’s face on one of the decapitated Walker heads. Greg Nicotero told EW, “One of the other heads, I don’t know if I’m going to get in trouble if I say this, was Johnny Depp. I think we had sculpted an emaciated version of a dummy head for something and we used Johnny Depp’s head as a basis just for a clay sculpt.”

The last five episodes (12-16) of Season 5 were titled  “Remember,” “Forget,” “Spend,” “Trying,” and “Conquer”. This isn’t the first time this pattern of words appeared on the show, though. Back in season 1 Dale gave a speech about a father giving his boy a watch.

“I like what the father said to the son when he gave him a watch that had been handed down through generations. He said: ‘I give you a mausoleum of all hope and desire which will fit your individual needs, no better than it did mine and my father before me. I give it to you not that you may remember time, but that you may forget it. For a moment, now and then, and not spend all of your breath trying to conquer it.’”

Did you see this quick reference to Little Red Riding Hood in Season 5 when we were being introduced to the deranged Wolves? Daryl and Aaron saw Red walking along while they were out on a scout and would later find that he fell victim to one of the wolves traps.

15. Yo Ho Yo Ho, a pirates life for The Governor 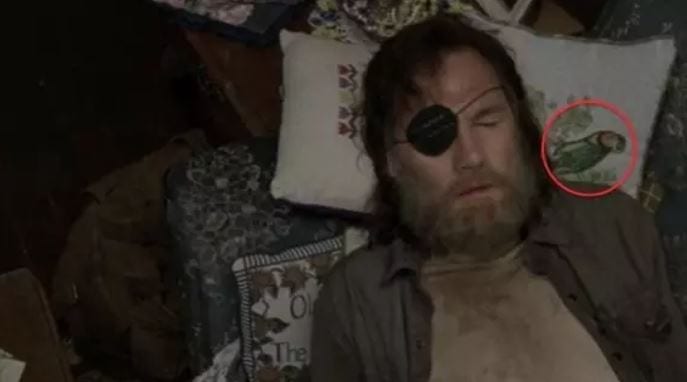 Don’t you get a kick out of this clever shot?

16. Dawn of the Dead strikes again 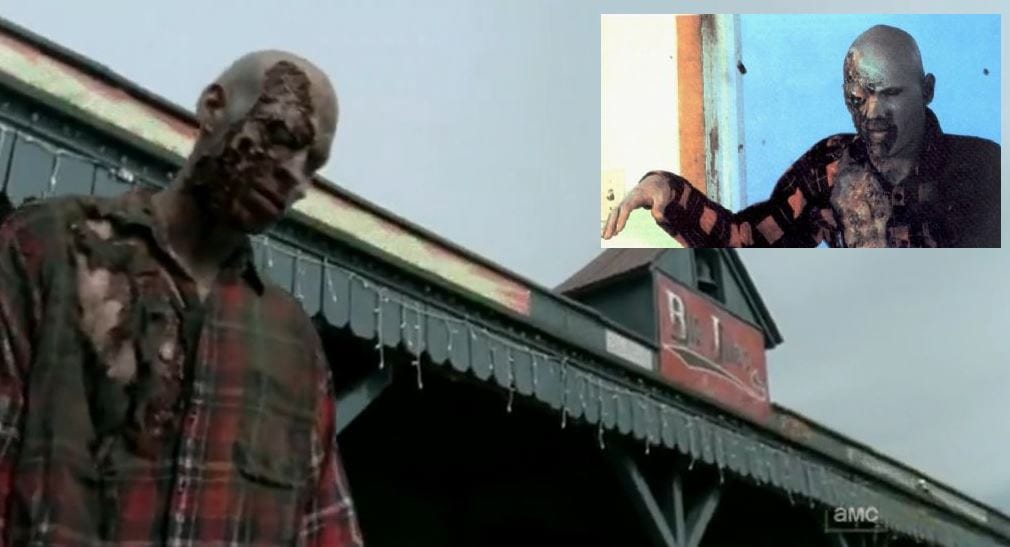 The walker that appeared right after Mearle’s death looked familiar because he was designed by Nicotero to look like a zombie from Dawn of the Dead.

“I went to the wardrobe people, I said, ‘Okay, here’s a photo–this is a zombie from Dawn of the Dead. This is my little nod to George Romero, my little tribute.’ And the fact that we tracked all the way out of the bar with him and he goes up to the car with Merle sitting in the car–only like five people got it but some of the prop guys came over and were like, ‘Is that the zombie from Dawn of the Dead?‘ I’m like, ‘Maybe. Could be.’ It’s fun. I love throwing those little things in.” 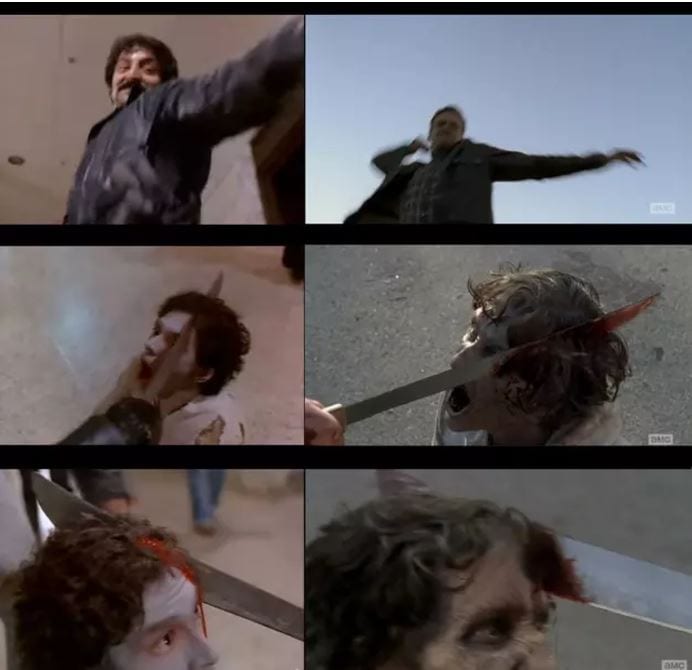 18. How about a little Romero Creepshow to change things up?

That crate you saw in Terminus was inscribed with the same words as the one in the Romero’s 1982 horror film, Creepshow.

19. Hey, even walkers need to hydrate 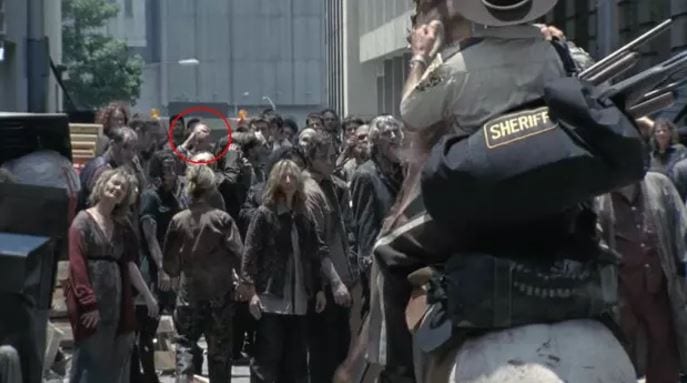 Not really an “Easter Egg” but this poor extra was caught sipping on some water in the background during the pilot episode.