So, your friends have gone home for the evening, the kids are in bed, your husband is in his man cave playing his video game of choice and you are finally all alone. So, you close the mini-blinds, turn off your cell phone, pour a glass of wine and dig out the chocolate. At that moment, you look around just one last time to make sure you are really alone because if you ever got caught watching this kind of movie you would never hear the end of it. They would judge you and you will forever be known as the person who likes “that kind of movie”. Oh, come on guys get your mind out of the gutter. I am talking about movies that are so bad that we really love them. Well, I guess I should say movies critics consider bad but we love them anyway.

‘Halloweentown’: So I am a 40-year-old mom and I have three kids who are almost all adults but I will sit down and watch ‘Halloweentown’ multiple times throughout the month of October. Now if you have never had the chance to watch ‘Halloweentown’  then you have either never had children or the Disney Channel. ‘Halloweentown’ is the story of the rebellious Marnie Piper (Kimberly J. Brown) and her coming of age drama. Marnie is determined to find out the secret that her mother Gwen (Judith Hoag) has been keeping from her during her Grandma Aggie Cromwell’s played by the amazing (Debbie Reynolds) yearly Halloween visit. 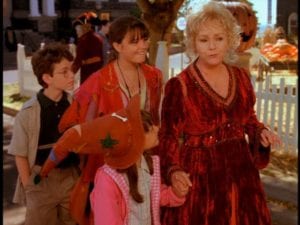 Marnie and her brother Dylan (Joey Zimmerman) and little sister Sophie (Emily Roeske) follow Aggie as she boards a “magical bus” that returns them all to Halloweentown. They find themselves in a mystical place unlike they ever could imagine. There are witches, trolls, ghosts and skeleton cab drivers. They finally arrive and surprise Aggie where she admits that yes, they are all witches and that their mother had decided to leave Halloweentown and marry their human father and leave her witch heritage in Halloweentown much to her mother’s dismay.

Marnie decides that she wants to follow the Cromwell Witch footsteps and wants to start her training right away however Aggie explains that there is trouble in Halloweentown that she calls “the bad thing” and it is putting spells on all her friends and all of Halloweentown. When Grandma Aggie falls victim to “the bad thing” it is up to Marnie and her siblings to save Halloweentown and their family.

The best part is there are FOUR movies in this saga except for the last movie in the series ‘Return to Halloweentown’ Marnie is played by (Sara Paxton) and we know anytime there is a major cast change it kind of changes the dynamic of the vibe. So yes, I am 40 and I am proud to say I love ‘Halloweentown’ and the sequels….