‘Sup readers? Happy Halloween! Welcome to the Halloween edition of On The Shelf— and while the day is different, the column is not. As per usual, I will be reviewing newly-released reading material and letting you know if it deserves a home on your shelf, if it’s an auto e-read, or even if you should just give it a hard pass. This week’s read is, true to form, a spooktacular, horror-themed oneshot published by DC Comics. Now, I usually only review graphic novels or collected editions, but it’s Halloween, we can let things slide! The official summary for this fright-fest is as follows:

An all-new, all-creepy one-shot set in the DC Universe—just in time for Halloween! Martha Kent fights for her life against a creature from a spacecraft that lands in front of her farmhouse. A young woman is possessed by the spirit of a murderous Amazon warrior. The last surviving member of the Justice League faces down a horror beyond imagining. All these and more are what happens when the most exciting new voices in contemporary horror fiction are paired with the talents of some of the greatest artists in the DC firmament! And if that isn’t enough to scare you, there’s Keith Giffen, too.

Yes, friends, there’s now an 80-page (ComiXology says it’s 85 pages. DC’s webpage says it’s 80) Halloween special that warps and upends all your favourite DC characters. The last time I reviewed a collection of stories by different authors, I did it one by one, with a short summary and a star rating for each individual title. Once again, I used this calculator, so if the math is off— it’s not likely that I’ll notice anyway. Oh, and by the way, one of the most hyped-up aspects of this oneshot was Keith Giffen’s mysterious involvement in its creation. It turns out he’s the plotter for every single story, and I’m not sure of the true extent of his involvement, but he’ll be credited on each anyway. Good? Good. Let’s get started. 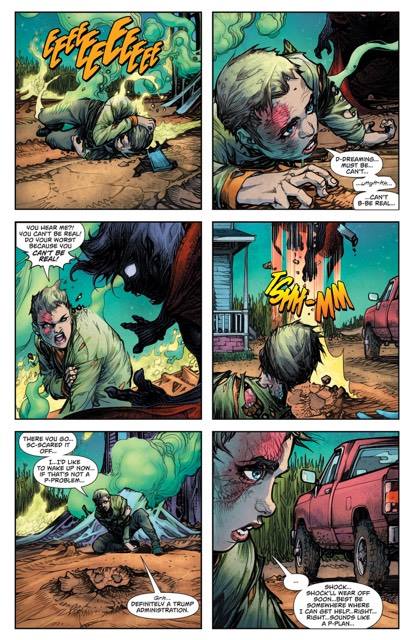 Basically, a redone Superman origin story in which an unfriendly version of Kal-El crash-lands in Smallville and goes ham on Martha Kent and her farm. Honestly, this one was a dud. Martha Kent— who is usually enjoyable to read about— was aggravating and came across as cringe-worthy. The story itself was disjointed, but the root problem with it is Martha herself. Something in her narration and dialogue was so off, that I found myself more interested in the probability of her imminent demise rather than her possible escape. There was also a random Trump joke sandwiched into this comic. We get it, you hate the guy— but falling back on taking a swipe at World’s Most Famous Narcissist doesn’t lend “Bump In The Night” any favours for being edgy because it doesn’t fit in the context of the story— in which there is a freaking Kryptonian youngster out to slaughter Martha Kent. Actually, that Trump reference reads like the creative team realized they weren’t pulling this off and said, “To hell with it— let’s throw a Trump joke in and call it a day. People will love us for that!” It’s been done by the entire internet, and it’s been done better.

Rating: 1 out of 5 (.5 of a star added for the artwork and colours, which could not save or even bolster this steaming disappointment) 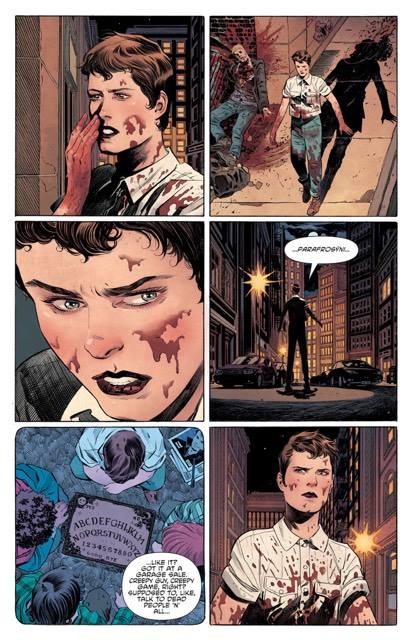 Remember how your mom freaked out every time she heard you mention the words “Ouija board?” Oh. Wait. That was just my mom. But it turns out she was totally right. In the sophomore installment of DC: House of Horror, we’re introduced to Jay, a teenage girl who is looking to stir up the spirits at a slumber party with her friends. But all hell breaks loose when Jay is possessed by the spirit of Wonder Woman, who has murder on her mind, because revenge is a dish best served to everyone, even if they didn’t do anything wrong.

I could totally get behind this oneshot if Jay’s only targets were people who had hurt her (like her abusive father), but the unchecked murderous rampage felt overdone (what is the point? Why?) the spirit of evil!Wonder Woman was pretty happy to exact a pound of flesh from any and every person, whether they be men, women, or children, for no reason at all. Literally no reason. I guess Jay’s new hobby is murder? She should ask Charles Manson how that worked out for him. Like “Bump In The Night,” “Man’s World,” is a pie that could have been so much better, but was pulled out of the oven only half-baked, and therefore inedible. 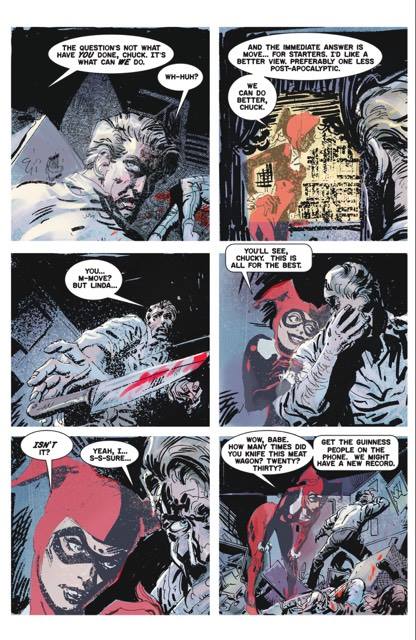 Chuck is part of the construction crew tasked with tearing down Gotham’s infamous Arkham Asylum. One night, thanks to a coworker’s mistake, Chuck discovers the sociopathic ghost of Harley Quinn in Arkham’s old shower room. Harley decides that she and the married Chuck are a couple and proceeds to drive him insane. Murderously insane. “Crazy For You,” is pretty good. I laughed out loud a few times; Harley might be crazy, but her earnest pursuit of Chuck is amusing, and the dialogue was sharp. 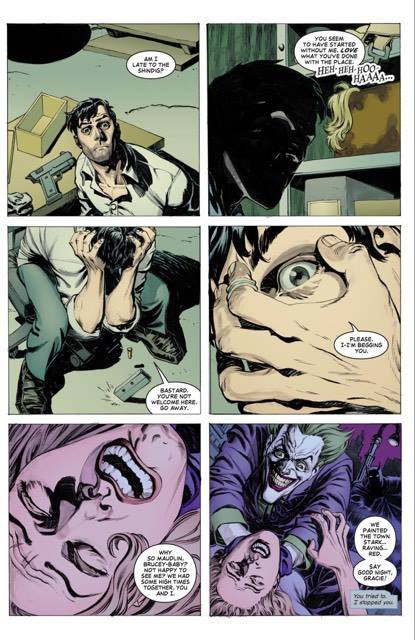 Jeez, this was dark. The plot of Batman and Joker being two sides of the same coin has been exploited before, but never quite like this. In “Last Laugh,” Batman/Joker mirror Jekkyl/Hyde. I was genuinely creeped out and unsettled while reading this, and all the bonus points are given for Cutter channeling Conroy’s Batman and Hamill’s Joker for his turn with The Dark Knight and The Clown Prince Of Crime. I can see why this oneshot might be polarizing to fans, but I, personally, really enjoyed it. 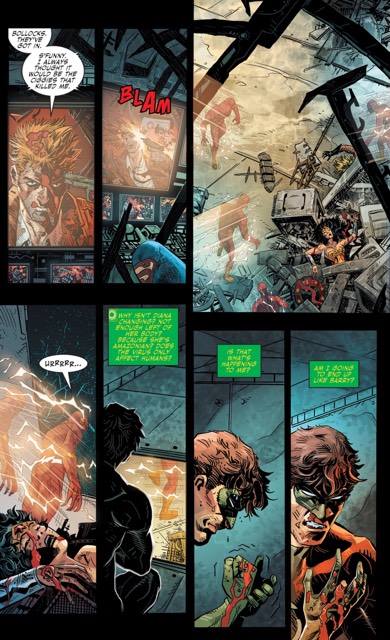 Most people blame Barry Allen for the way he cheerfully destroys timelines; after reading this oneshot, readers will be side-eyeing him for being the one who exposed The Justice League to the zombie apocalypse. This was a really cool oneshot because Hal Jordan is our main character, and the balance of hope and bleakness was really well done. The art was wonderfully gruesome. The whole creative team did an amazing job! 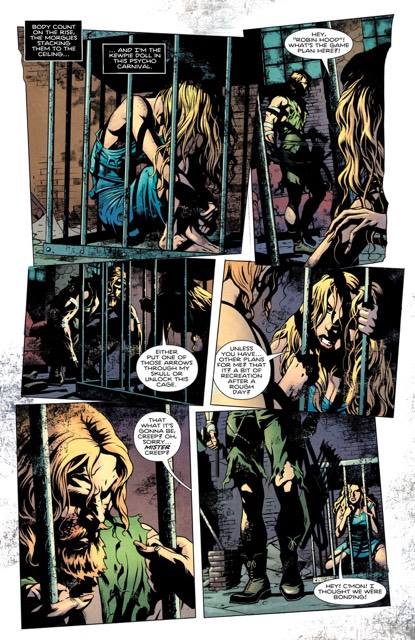 The Green Arrow and The Black Canary have never been more devilishly psychotic in this twisty oneshot in which… stuff only kind of makes sense. Honestly, the concept was cool, the art was great, but there was something about this that just didn’t strike home. 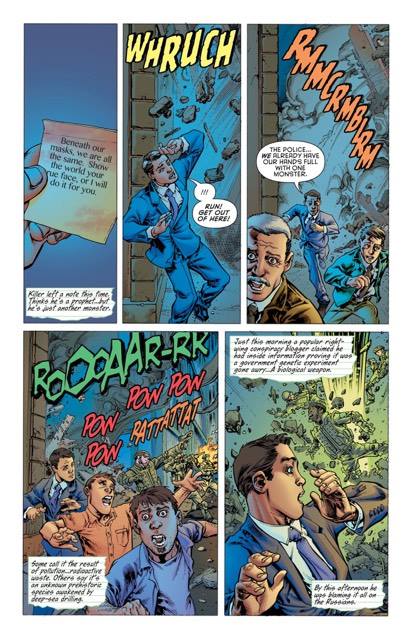 DA Harvey Dent was a violently unhinged psychopath before becoming Two-Face. I think? Also, there was a huge green praying mantis laying waste to Gotham. This oneshot was a little scattered, and while the artwork was sublime, the script was sorely lacking. I wasn’t down with this one. 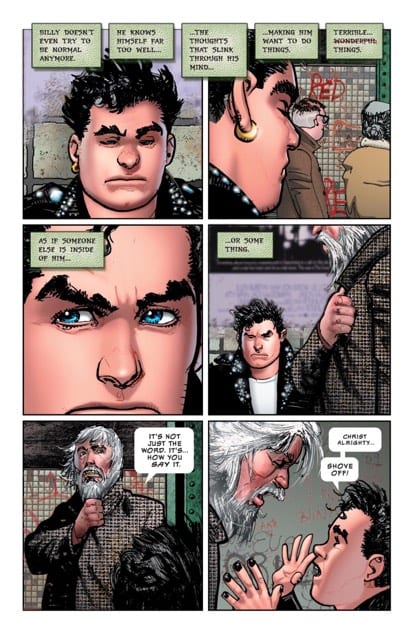 Billy Batson struggles with violent, terrible thoughts and is sure he’s a budding serial killer. He’s given a note with “SHAZAM” written on him, and soon after, is tormented by a disembodied entity trying to get him to utter that fateful phrase. I stopped caring two pages into this oneshot, when it was revealed that Billy, like everyone else in this collection, is a burgeoning psychopath. Thank goodness this was the last oneshot. The ending all sorts of “meh” as well.

Overall: The concept of this oneshot (beloved mainstream horror authors taking a spin with classic DC characters) was far better than its execution, which ranged from the unbelievable to the head-scratching  to the repetitive. Blackest Day is probably the best oneshot in here because it was something new and didn’t rely on the cliched theme that every single superhero in the DCU was somehow a seething bucket of criminality and rage. I like AUs as much as the next reader, but these characters felt entirely foreign with nothing to tie them to their mainstream incarnations. Maybe they’ll do better next year? DC: House Of Horror #1 won’t be going on the shelf for the reasons just mentioned, but if you think you’d like it, you can check it out here.

On the Shelf rating: 2.6 tricks out of a possible 5 treats.