‘Sup readers? Welcome back to On The Shelf, which took a break last week because of some connectivity issues (thanks, internet provider!) but is now back in full force. This week’s book is the recently-released behemoth Absolute Justice League written by Batman: The Animated Series co-creator Paul Dini with art by Kingdom Come royalty Alex Ross. If you’ve never read a single word of Paul Dini, seen a masterful Alex Ross painting, or if you’re brand new to DC Comics in general, Absolute Justice League: The World’s Greatest Superheroes is a fantastic starting point for all three.

This book isn’t written like a traditional comic, but rather like a storybook/a love-letter to the characters inside. Originally published as four separate graphic novels to commemorate the 60th anniversary of Supes, Batman, Captain Marvel and Wonder Woman, respectively, the Absolute edition is the bind-up of all four. Each story features one of the aforementioned heroes tackling a specific issue (Superman wants to solve world hunger, Batman believes he can end the war on crime for good, Shazam gives hope to terminally ill children, and Wonder Woman helps oppressed women) while bringing them back to the basics of who they are.

Since diving into comics years ago, I’ve pretty much put the training wheels away, entrenching myself in the mythos of specific characters and sometimes forgetting that other people are just starting out and don’t know where to begin. When I find a book that is so obviously accessible to new readers, a little bell goes off in my head, a ding of excitement when I realize I have discovered a book to heartily recommend to people looking for an entryway into the medium. I also adored it because it contains so many simple truths that feel like they were once common knowledge, but now have been buried in a world of SnapChat filters, faux online outrage, and  This is one of those treasures. I can’t go into detail without ruining the entire book (and if you’re interested in picking up some DC post-Justice League, give this a try) but I will speak on the first story, Superman: Peace On Earth because it’s the first in the collection, and the foundation/expectation for all that follows after.

Ultimately, whether you subscribe to grimdark Supes or a Batman who is prepared for any and all disasters, that is not who these characters were created to be. For me, personally? Superman is meant to be an ideal, a wellspring of hope for those who have lost it, a reflection of the best that humanity can aspire to be. He’s not meant to revel in despair, nor is he without his faults. As most will tell you, Superman is the disguise, Clark Kent is the true identity. The reverse can be (and often is) said of Batman, and while he can seamlessly slip into a darker tone, his earliest adventures were silly but beloved capers that everyone could enjoy.

Paul Dini, as always, is a great writer, but let’s be real: the selling point of this book (and 90% of the reason you’ll immediately be captivated by it) is the phenomenal artwork inside. Ross’s visuals take the lead here, and that’s not a bad thing.

I absolutely recommend that you pick up, love, share, and display Absolute Justice League on the shelf. If you want a copy, check it out here. 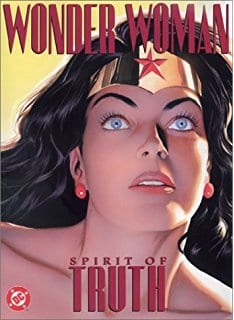