As a result of the contention, sources tell Entertainment Tonight that they are now trying to limit contact with each other while navigating the tense situation. “Jason and Olivia have a very awkward relationship,” the source tells the entertainment outlet. “They try to limit any direct contact with each other, but they both want what’s best for their kids. They are trying to sort out a manageable, stable, and healthy co-parenting routine and schedule for the sake of their children.” 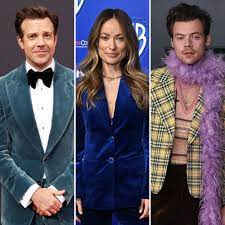 Despite the divorce, Wilde is happy in her new relationship. “Olivia is totally smitten with Harry and in love,” the source adds. “They are both so supportive of each other, personally and professionally speaking, and they are really there for each other through everything.” But Wilde and her ex’s court hearings marches on.

Sudeikis’ lawyers served Wilde custody papers, which her legal team took as the action as being “clearly intended to threaten me and catch me off guard.” She said the manner in which she was served the custody pacers was “the most aggressive manner possible.” But sources from Sudeikis’ team insist that he didn’t know when or where the envelope would be delivered. It would be up to the process service company, and he would never condone her being served in such an inappropriate manner.

PEOPLE Magazine first reported in 2020 that Sudeikis and Wilde had ended their seven-year engagement.

“The children are the priority and the heart of the family’s relationship,” a source told the publication they’d actually split at the beginning of 2020. Their breakup initially seemed amicable, with them even supporting each other’s careers. It seemingly appeared that once Wilde began dating Styles, issues arose.