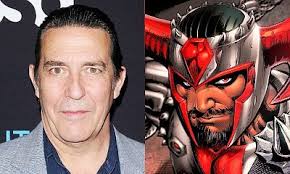 Finally, official confirmation was announced via The Independant this week that Game of Thrones star Ciaran Hinds would indeed be playing the infamous right hand man of Lord Darkseid of Apokolips – Steppenwolf in Warner Bros. Justice League film!

In a new interview with The Independent. Hinds confirmed his Justice League role:

“They were great fans of Excalibur, Zack and his team. Maybe that’s how I got the role [in Justice League]! Who knows?,” Hinds speculated. “There’s a bit when they’re walking in Gotham City and suddenly on a marquee of a cinema you see Excalibur playing.” Then there was the moment Superman is impaled by a large spear. “That’s exactly what happened in Excalibur, with Nigel Terry [who played King Arthur] pierced by Mordred.”

Hinds (Steppenwolf) will be mostly CGI except for his eyes and mouth.
“Basically they’re going to construct something, digitally, and then they will use my eyes and mouth,” he said.

Hinds also confessed details about Steppenwolf’s role in Justice League. “He’s old, tired, still trying to get out of his own enslavement to Darkseid, [but] he has to keep on this line to try and take over worlds,” he revealed.

As one of the New Gods, Steppenwolf (which is German for “wolf of the steppe”, or coyote) is the younger brother of Heggra, and the uncle of Uxas (Darkseid). He is also a member of Darkseid’s Elite. He leads the military of Apokolips and also rides a hover bike which may be at the same level of technology as Orion‘s.

Justice League will be released November 17, 2017.