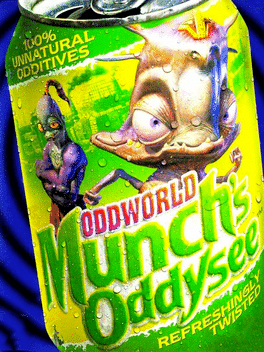 Some of my first gaming memories involve the Oddworld franchise. Yeah, I grew up with Nintendo like most did, but we didn’t have a TV for most of my childhood. We did however have a home computer, and when my grandmother gave us a bunch of random games, Abe’s Oddysee was one of them. I remember it fondly, the platforming, the puzzles, the farts. While I never got much further than the first few levels, the side-scroller remains firmly entrenched in my early gaming memories. I still don’t know why it’s not more popular and up there with gaming stalwarts like Mario and Crash Bandicoot.

One of my other memories as a teen was getting a small moment to mess around with Munch’s Oddysee on a demo Xbox in a Target. I only managed a few minutes with it before mom pulled me away, but it looked so good. I loved playing around with Munch, and the 3D world was such a departure from my childhood. After all this time, I got an email about the Switch release in my inbox. I knew it was destiny, and as such I’m here to give you my report on just how this game translates today. 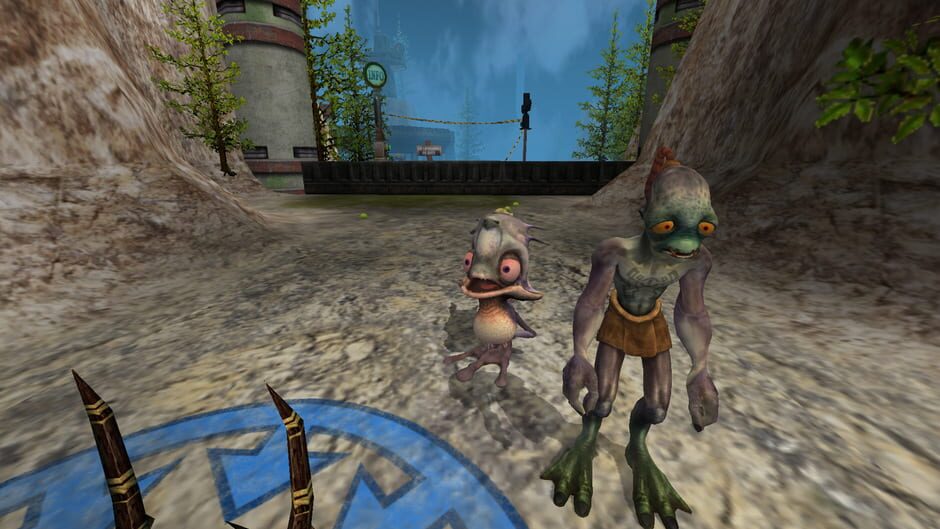 Any time I talk about a remaster, however extensive it may be, my focus will be on graphics and gameplay. Most who want to jump in want to know if it’s worth rebuying. There are games that do remasters well, like the recent Saints Row The Third for Nintendo Switch. Others, like Devil May Cry HD collection, miss the mark with giving a resolution change which only stretches the original product. The most important thing for me with any remaster is how it looks and plays. All that being said, let’s dive in!

To start, let’s talk about the cutscenes. The game starts with little Munch getting captured by the Vykkers. This scene is not very well remastered, and is in 4:3. That isn’t always an issue, but it is shocking how different they feel to the actual game. I understand these animations were good for their time, but it would be nice for them to feel… cleaner?

That brings us into the actual gameplay, and it’s really good. Oddworld looks and feels like I remember it. It may still be somewhat dated, but it’s satisfying to look at and play. That isn’t to say it’s all perfect. The controls follow suit in feeling like they’re still from 2001. In many platformers there is a specific feel when jumping. In Munch’s Oddysee it’s hard to place that, just like older games such as Crash Bandicoot. The camera also suffers, but I also chalk that up to the era it’s from. 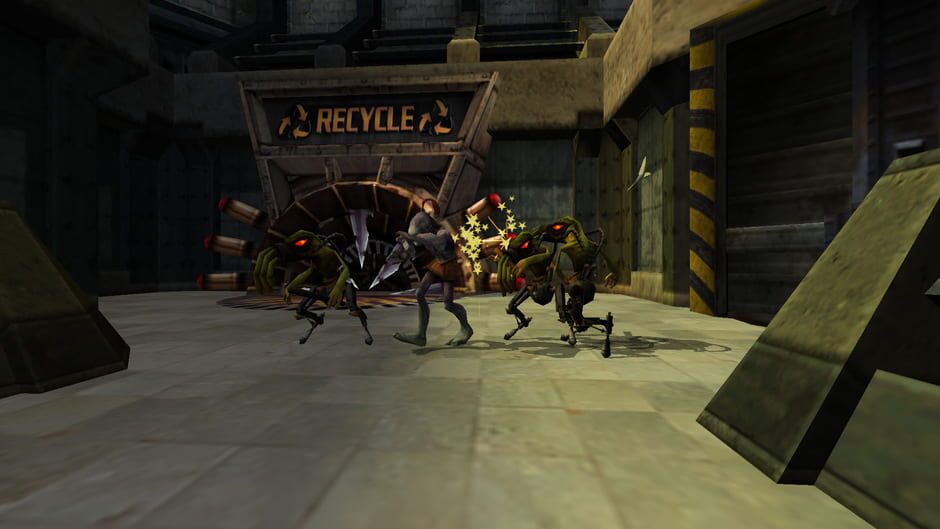 However! The game itself does not suffer from these issues. In fact, the game is better because of it. Keeping the controls as original as possible lends itself to exactly what you look for in remasters, nostalgia. I remember falling off of ledges when playing my PS2. I remember God Of War’s horrible camera angles (didn’t matter, amazing game). If a remaster is there to bring me back, it needs to stay as authentic as it can.

One thing I love and hate is playing as both Abe and Munch. Let’s start with the love. The combination of different abilities makes for some amazing puzzles. Sometimes I need Munch to connect to a crane to pick Abe up to get to an area. Abe can get all the Mudokons together and use their chants to open new places. Munch is most useful in water, Abe on land. It’s an interesting partnership of course, but one that is cleverly designed and works extremely well. 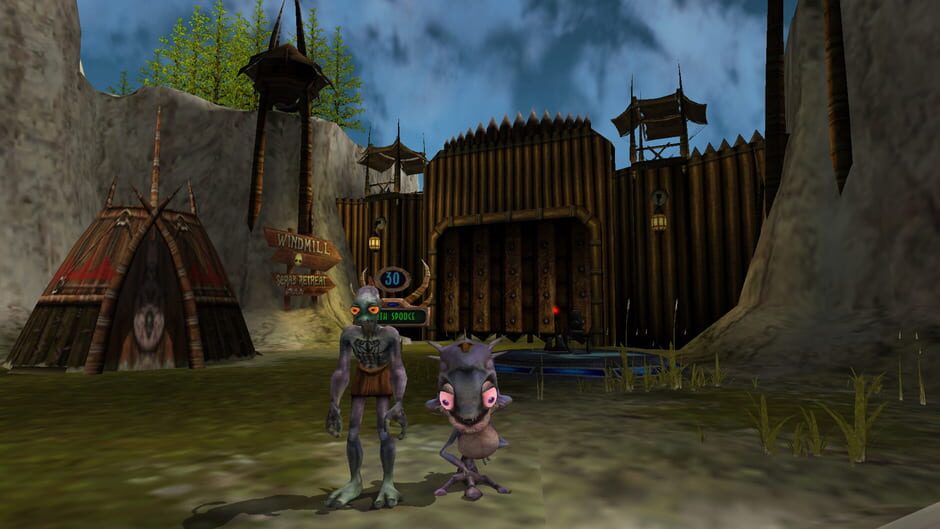 The game is also pretty forgiving if one of them dies. There are “egg points”, where you can go to revive the deceased from an egg in specific spots. It’s as simple as finding one and clicking a button if you lose Abe or Munch. Take as much advantage of it as possible, as it’s more or less free lives.

Now for the hate. It’s extremely annoying to have to keep up with Abe and Munch. Neither will automatically follow the other. While I understand some areas do not allow that, as Abe cannot swim and Munch cannot jump on land, it is still irritating. Some architecture did not exist back when, so I get it, but I constantly manage to end up across the map from my partner.

As for the graphics, I came away impressed. Remasters have different standards, and Munch’s Oddysee has high ones. Something I picked up watching some gameplay from the original is how dark it is. This port is so very clean. The brightness has been turned up tremendously but not in a way that diminishes the environment. No, this isn’t as pretty as the Spyro “remakes”, but it looks good. This is a game I want to see a full remake of now, and part of the reason comes from seeing how good it can look with just a little work. 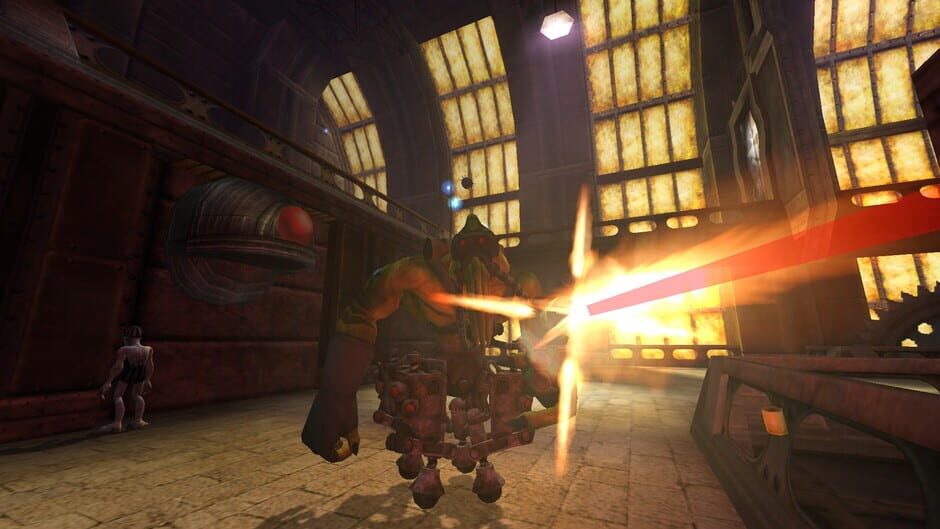 Something else that really stands out is how humongous the levels can be. I know these existed before and a remaster doesn’t change that, but the craftsmanship is awesome. Some areas are smaller, what you expect from a platformer. But others have separate areas you unlock as you play through puzzles to do so. These seem to span on and on, and it’s impressive for an original Xbox game.

There are some things I just do not like. The game is based on the original Oddworld formula, of which Abe’s Oddysee is a computer game. A keyboard allows me to utilize many buttons to command my followers. On a Switch there are almost too many commands to map. Munch’s zap attack is mapped to clicking the right stick. That is terrible placement for a Switch joy-con. The same kind of thing happens with leading your followers. I constantly mix up telling my minions to attack or do a task. The same happens with getting them to follow and telling them to wait. It comes down to finding a better way to simplify, or to build in a better tutorial, even being a remaster.

I will say, I didn’t expect the game to run as well as it does in handheld mode. I try and give any Switch game I review some time in both docked and handheld mode. While the controls are still touchy in handheld mode, they oddly aren’t as bad as when using a Pro controller in docked mode. The game runs very smoothly without issue, so I give it a thumbs up for taking it on the go.

Before I finish this up, I want to take a second and praise the Oddworld formula. These games are weird y’all. An evil corporation making food out of the inhabitants of the world, enslaving others to make it? Some of the screens almost remind you of a horror game, but the cutesy funny characters really make it unique. Plus, having a slig call you “fart breath” or something of the suchlike is just amazing. Thank you Oddworld Inhabitants for making sure to preserve such a legendary franchise.

So what’s the verdict on Oddworld: Munch’s Oddysee? It’s a bit of a mixed bag. On one hand everyone in the world should play an Oddworld game. They’re unique and have fantastic platforming. This port gets the graphical upgrades right, and the duo of Abe and Munch are wonderful. But some decisions with control mapping and overall feel do hold it back. If the game was a little less than the $29.99 asking price on the eShop I would say it’s a no-brainer. I still say, this is a fantastic game that is worth experiencing. If you like old school platforming and weird alien dudes, give Oddworld: Munch’s Oddysee a try.

*Thanks to our partners at Microids and The Redner Group for providing a review code! Oddworld: Munch’s Oddysee is available now for Nintendo Switch on the eShop for $29.99!