While the season 7 premiere of The Walking Dead was hands down the most painful and terrifying to watch, the third episode of the season was a very close runner-up. Daryl Dixon has always stood as a beacon of strength and free will during a fight that tries to rid you of both, and watching him be transformed a hollow shell of the confident character we’ve grown to love was painstaking.

Even in the face of adversity, and even when he didn’t realize he was doing it, Daryl has always been a safe place to land for the people around him, a confidant, a hero, and more importantly than that – a friend. While these traits are far from destroyed, they’re traits that he no longer feels worthy of embracing, and that’s almost worse.  As fans watched Daryl naked in a room eating dog food, curled up after being brutally attacked, and break down crying after seeing a photo of Glenn, it was obvious that he feels that his life has lost it’s worth; that he’s not someone that deserves to feel anything other than pain.

Norman sat down and spoke with Entertainment Weekly about Daryl’s mental state, how it felt to film ‘The Cell’, and a bit about the strength he still manages to find, even in despair and a desolate state.

EW: The first time we see Daryl he’s naked in this cell. I gotta know: How cold were you in there, my man?
Norman Reedus: ‘Yeah, it was cold. I won’t lie. But it was really dirty more than anything. It was weird to sit on that floor butt naked. I mean, I was totally naked, so it was rough.’

He goes on to speak about how this episode left him the dirtiest he’s been and the day wasn’t just emotionally draining, but physically exhausting as well, and for as much emotion and desperation Norman channeled for this episode, we weren’t surprised.

‘It sucks. I’m not kidding; it’s no fun, but I’m not that kind of an actor that can get up and have a Coke and talk to people and just go back. I mean, I’m not Meryl Streep. You know what I mean? I just have to go suffer until it’s over and then leave. I’m not that good turning it on and off. I do have to give a shout-out to the crew, because it’s such a comfortable set, and everybody trusts each other there, that they allow you to do stuff like that. They don’t talk and crack jokes in the jail cell. It’s a very serious set, and everybody wants the best thing to end up on the TV show. So they allow you to go there, and it’s almost like this sort of support group. They’re very respectful of all the actors on the set, and so I don’t think it would be as easy with a different crew.’

The most painful emotional reaction from Daryl at any point of ‘The Cell’ was his breakdown after seeing the polaroid of Glenn that Dwight tossed into his room during a moment of defiance. At this point of the episode, it’s been obvious that Dwight is jealous of Daryl but that he also is starting to find a sense of his own humanity again. Maybe he gave him the photo to encourage him to fall in line, maybe he did it as an act of a strictly evil and mocking nature, but regardless of its purpose, it’s job was truly done.  The moment was jarring.

EW: What about that scene where Dwight puts the Polaroid in Daryl’s cell, and we really see you lose it? How did you get yourself into that place to just let it all go there?
Norman: ‘I think part of me’s always teetering on that edge every single day, to be honest, but you just go back. You just feel it. You get in the fetal position, and you just go there. I think early on in this show, I would play a song, and I would get it in my head. I think being on the show this long, there’s just a switch. You just hit a switch, and you go there. It’s always stored in the back of your head, and it’s not hard to go there. It’s harder to stop. It’s harder to come back than it is to go there sometimes. It’s not a trick or anything like that. You go there at 1 p.m., and you just kind of snap out of it at about 6. Just stay like that, pretty much.’

Norman was definitely in character through the entire episode as he struggled with Dwight, Negan, and also himself to find a sense of proper footing again – to find a sense of self.  A large part of that came from the way he stood up to Negan when he was expected to kneel at his feet, in the name of his friend – in his memory.

‘No, Daryl’s a fighter. He fights to the end, but in saying out loud his name instead of Negan’s name — it’s the last shred of himself that he has and for his friends. I assume he thinks he’s going to get killed right there when he says he’s not Negan. He’s signing up for more torture, but he’s doing it for the love of his friend.
He can’t say that he’s Negan. He’ll never do that. He’ll fight, but matters of the heart to Daryl are hard. They mean more. Hit him in the face with the bat. String him up. Feed him dog food. Whatever. He can handle that, but when it comes to matters of the heart, they’re hard for him, and he’s learning, and those are the things that give him faith and hope, and he can’t let go of that because that’s the last thing he has left.’

Norman says that Daryl didn’t give up or give in and stood his ground soundly against both Dwight and Negan in Glenn’s memory.  There was a clear and obvious power struggle between Dwight and Daryl that wasn’t lost on viewers.  Dwight, Negan’s go-to man, expected Daryl to beg for mercy and fall at his feet the way Dwight fell at Negan’s, but Daryl didn’t do that.  As Daryl stood his own ground it seemed that Negan almost grew more fond of him, and while his strict reign of terror didn’t waver, you could see it written clearly on Negan’s face that Daryl intrigued him, and that made Dwight nervous.

There’s an exchange between Dwight and Daryl that proves perhaps the biggest difference between them, and while Daryl understood why Dwight fell quickly under Negan’s rule; Daryl couldn’t actually relate.

‘I get why you did it. Why you took it. You were thinking about someone else. That’s why I can’t.’

While Daryl’s future is still very much unwritten, at least to the knowledge of the fans, there’s one thing that’s going to be cemented through the rest of season 7, and likely the entire series.

Daryl will do everything he can to carry on Glenn’s legacy, he’ll live out a life that Glenn was unable to and if that means he suffers in the process, he’ll take it without complaint. 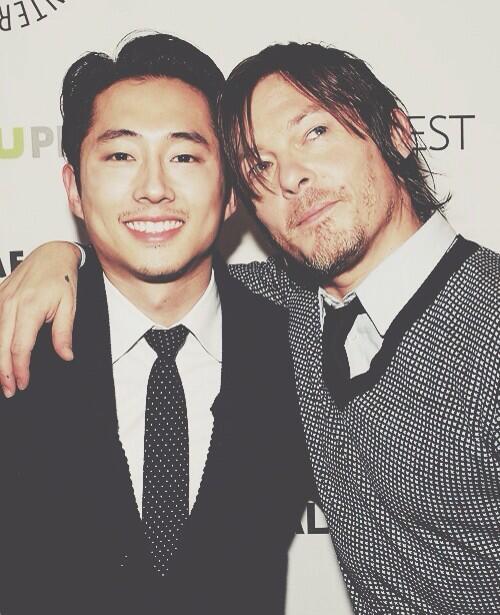 ‘The Cell’ was one of the most emotionally charged episodes of the series as a whole and while it was heartbreaking, Norman’s talent was on full display and he deserves all the credit in the world for that.