Anyone who is currently on the Walker Stalker Cruise (or watching through photos and videos at home) knows how important and exciting it is to purchase your cabin and begin counting down the days until you’re at sea with The Walking Dead Family. There’s no feeling in the world like being immersed in all things The Walking Dead, especially during an experience as unique and intimate as the cruise. It’s a fan’s biggest dream come true.

Anyone who is currently on the Walker Stalker Cruise (or knows the series at all) also knows how important Norman Reedus is to the fan base. Norman portrays Daryl, a character not in the comics, and one that the crew probably didn’t think, at first, would make the impact that he did. Now, however, he’s an integral part of the series and fans would go to great lengths to make sure he is unharmed. There’s even a Daryl Defense Squad on social media and you see shirts at conventions, it’s awesome. Norman is one of the most down to earth celebrities of our time, likely of all time, and he truly cares about his fans.

Another thing Norman cares about is using his platform to spread kindness, joy, and to help those who ask in any way that he can. He frequently works with charity organizations, shares ways for his fans to get involved, and has worked with Make A Wish as well to bring some incredible days to children who just want to get to spend an afternoon with him. He also shares fan art, fan-made merchandise, and edited photos and videos of himself produced by talented fans. He’s incredibly appreciative of those who take some time out of their own lives to do something for him.

So it goes without saying that Norman cares about his fans and recently, he did something for a fan and the people that love her that means more than words can describe. 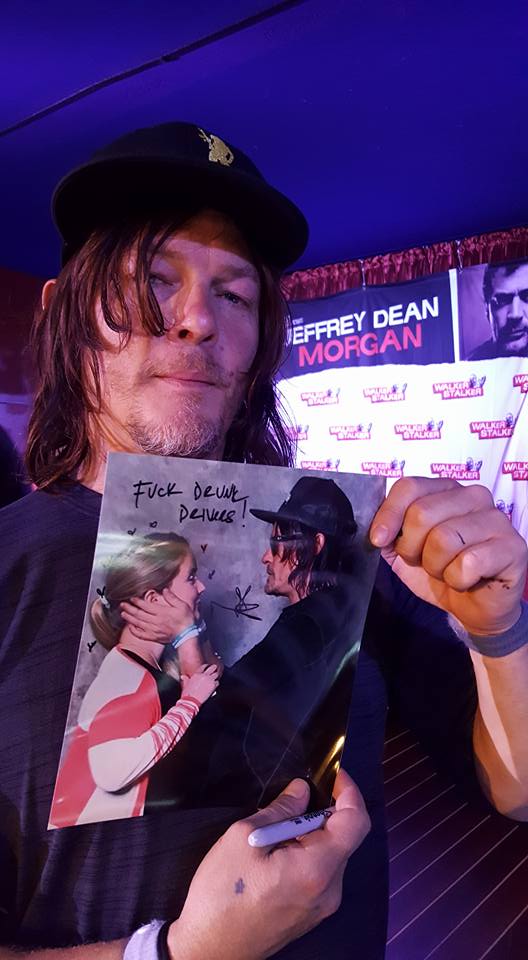 Carli Karluk shared this photo of her friend, and a member of her ‘tribe’, on Facebook with a sweet message accompanying it earlier today. Carli is enjoying the Walker Stalker Cruise with friends, but one is looking down upon her instead of being with her in person after a drunk driver took her life on New Year’s Eve. Mandy Starkey-Carson left behind a family and friends, but she also left behind a legacy that has inspired them to keep going, even in the dark days that came after losing her.

Carli and Mandy were close friends, a simple look at Carli’s Facebook page proves that. It also proves that she’s living for Mandy now as she navigates life and experiences things that she would have loved to have Mandy there for. The Walker Stalker Cruise being one of those things. Carli decided to make a lasting memory for Mandy, for the people who love her, and for Norman as she brought a photo on the cruise to share with him as she told him about her friend.

When Norman talks to you, you get the feeling that you’re the only person in the room, so we know that this story was given his full attention, and it touched his heart just as it’s touched ours. You can see it on his face as he holds the photo he took with Mandy at a prior convention and sends a strong message to drunk drivers.

The thing is, drunk driving crashes are ALWAYS preventable, which makes the lives lost due to them so hard to accept. You can call a cab, call a friend, call a family member. You can even walk, but there’s never a reason to get behind the wheel after you’ve been drinking. There’s simply no excuse for it.

If you wish to learn more about Mandy, you can visit a page set up for donations after her passing. While donations are no longer being accepted, you will read a lot about her and find out what a bright light she was to those who knew her, and how missed she is every day.

We’re sending our love to Carli, Mandy, and those who love them both. Thank you, Norman, for once again sharing some kindness and making lasting memories with your fans. It always means more than you know.