So last week we had Captain America coming out as a Hydra Agent and DC’s Universe commenced its “Rebirth.” But the saddest part of May 25th 2016 was that the comic book world lost the New 52 Superman. Superman issue 52, the final chapter of a story arc called “The Final Days of Superman,” ended the conflict with Superman making peace with his close friends before his dying body finally gave in to a terminally ill disease.

Any DC Superman reader should know by now that throughout 2015 and 2016 Kal-El was infected by Doomsday then had his powers taken away in the “truth” storyline and the final nail was the exposure to Kryptonite. After discovering he was dying Superman then went on a final crusade with Batman to enlist his friends to make sure there would be a Superman or Girl to take his place. This affected Batman tremendously as he was not only losing the most powerful ally on Earth but, a close friend. 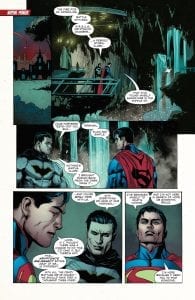 In the final pages of the issue a bearded Pre-52 Superman appears and assists New 52 Superman elevating Swan to the upper atmosphere where New 52 Superman activates his solar flare power. This negates Denny Swans powers and kills him. Now in case you missed it….Denny Swan is a human who somehow was given Superman’s abilities and memories but believes he truly is Kal-El even if it means killing people to make everyone believe in him. Unfortunately, this was the breaking point for Superman’s body. When he made landfall he had time to say goodbye to his gathered friends (including Lana Lang, Lois Lane, Supergirl, Batman, Wonder Woman, Steel and the pre-52 Superman). Sadly his body explodes with energy and crumbles to dust. 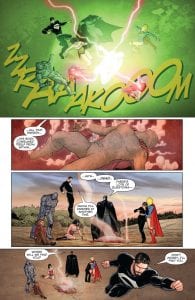 The only problem I had here was that DC Comics decided to kill off Superman on the same day as their first issue of Rebirth.  Does this death take away from Rebirth? No. Rebirth takes the sting out of Superman’s death that we see it as secondary story not even making anywhere near the pub of when the pre-crisis Superman died fighting Doomsday back in 1993. Where it should’ve been a big deal as Captain America being a Hydra agent reveal over at Marvel it was just a side note in the news feeds. Justice League 50 which was also a tremendous story should also have been released a week earlier so that Rebirth could have had its own big news day.

Now, is New 52 Supe’s truly dead? Who knows? I hate to say it but I think this is a permanent death. I know everyone says no one is truly dead for long in comic books but, I think this one is gonna stick. I’d like to say he’ll be back in some form one day but, the only way he can return is one of two ways: First, the Regeneration Matrix in the Fortress of Solitude, which as of Superman Rebirth issue one out today 6/1/16 is not in the New 52 Superman’s Fortress as discovered by the Pre-Crisis Superman who stole his remains from his crypt to attempt to regenerate him. I actually felt hopeful that the old Superman could pull it off and revive him but alas it was not to be. Two: some omnipotent force decides to bring him back and use him for some evil purpose. So why is there no regeneration matrix on this Earth? Either Dr. Manhattan took it away or it was just never constructed by Superman. I think Manhattan is the puppet master here and only wants one Superman to deal with. 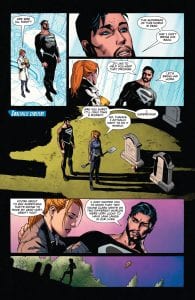 This death actually hit me harder than the Pre-52 Superman’s death against Doomsday back in 1993 because I was able to follow this Superman’s career from inception back in 2011 to his demise. This version of Superman has the qualities of nearly every previous version. He starts off as a reporter for the Daily Star. He and Lois are friends and not lovers. His parents are dead and he never becomes Superboy or meets the Legion of Superheroes. Once he becomes an adult he debuts as Superman. During the Truth storyline his secret identity is revealed to the world and he loses his superpowers and struggles with vulnerability for the first time while fighting crime. He also deals with not being taken seriously. Issues in his relationship with Wonder Woman that eventually cause him to end it and regaining eventually his powers which in the end kills him.

The New 52 Superman was a true hero till the end. He will be greatly missed.

Home » Fandom » No Rebirth for The New 52 Superman