For eight seasons and nearly ten years, we were graced with the fang-tastic drama series that was The Vampire Diaries. What started out as a series about a teenage girl stuck in a love triangle between two vampire brothers, quickly turned into an elegant show about soulmates, friendship, brotherhood, and family.

The series ran on The CW from 2009-2017 and starred Nina Dobrev, Ian Somerhalder, Paul Wesley, Candice King, and Kat Graham. Despite ending last year, fans are still treated to the mini-cast reunions through social media, but none are quite as welcome as whenever Nina and Paul get together.

Back in May the pair casually ran into each other while in NYC and if I could have liked the photo she posted on Instagram 15 times I would have.

Excuse me sir, you look familiar. I feel like we’ve met before. Maybe in a past life?

Well, most recently Dobrev was doing a live filming of her new sitcom Fam when Wesley decided to surprise her. Much like any of us would react when Stefan Salvatore was suddenly in our presence, her reaction was pure joy and I’m obsessed with it.

STOP EVERYTHING, PAUL SURPRISED NINA ON SET OF HER NEW SHOW AND THEY HUGGED I CAN’T pic.twitter.com/EbtgTvChY8

In the video, Dobrev is just so excited to see Wesley that she runs over to hug him and he has to remind her to go back to the cast. “Sorry!” she said as she ran back. Wesley also shared a video from his POV and the look on her face is priceless. 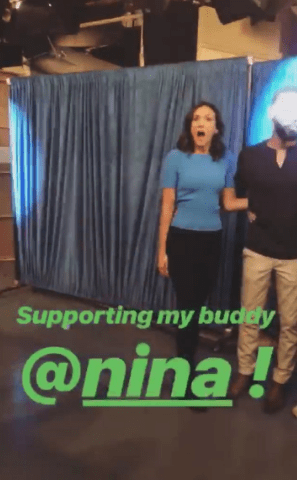 Fans were absolutely living for the moment on Twitter.

While The Vampire Diaries and it’s spinoff The Originals may both be off the air, the next chapter of the franchise is set to begin when Legacies premieres on The CW this Fall. Starring Matt Davis reprising his role as Alaric, Legacies follows the kids of Klaus and Alaric as they come together at the Salvatore School for the Young and Gifted. It will feature some fun cameos from your favorite Vampire Diaries characters including Jeremy Gilbert and Matt Donovan!

Dobrev’s new sitcom Fam follows Dobrev as Clem, a woman whose dreams of an upstanding life with her new fiancé (Tone Bell) and his family are dashed when her younger train wreck half-sister (Odessa Adlon) comes to live with her to escape their train wreck of a father. The series will have a midseason premiere on CBS.

Wesley will soon be starring in CBS All-Access’ grim fairy tale drama Tell Me a Story. The series“takes the world’s most beloved fairy tales and reimagines them as a dark and twisted psychological thriller. Set in modern-day New York City, the first season of this serialized drama interweaves “The Three Little Pigs,” “Little Red Riding Hood,” and “Hansel and Gretel” into an epic and subversive tale of love, loss, greed, revenge, and murder.” Tell Me a Story premieres on Wednesday, October 31st on CBS All-Acces. You can watch the trailer below!

Most importantly though, The Vampire Diaries is currently streaming on Netflix so you can relive all the magic of these two and more!