Since Sunday, Pokemon Trainers around the globe have been striving to capture the Legendary Lugia and Articuno, the first two Legendary Pokemon to be released in Pokemon Go. Lugia of course is the poster child of the second generation title – and best sequel of all time – Pokemon Silver. Articuno on the other hand is a member of the original Pokemon Red/ Blue/ Yellow’s Legendary Bird Trio as well as the mascot of the in-game team Mystic. Since Mystic won the team challenge last Saturday, their mascot was up first; but now Niantic has released new details on the remaining birds. Get your Raid Passes ready Trainers! 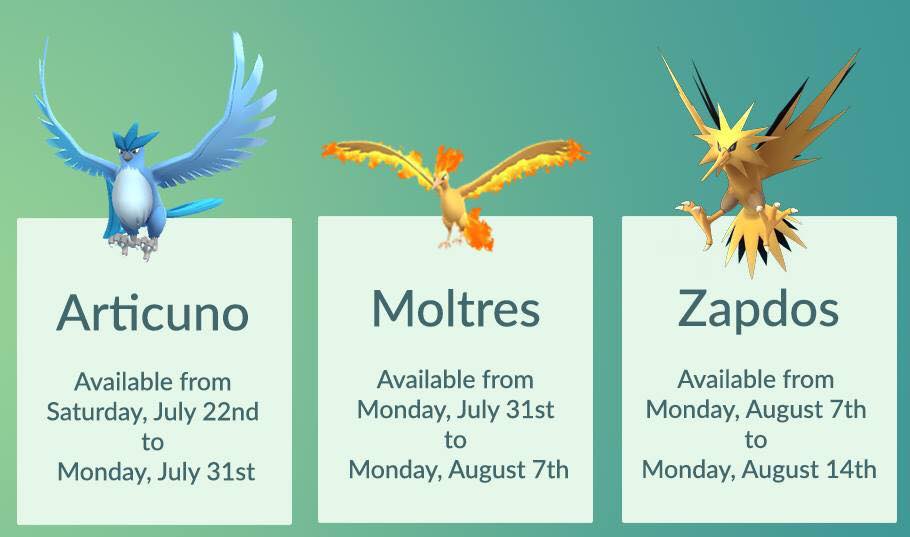 That’s right! It looks like you’ll only have until next Monday (July 31st) to catch Articuno before it’s replaced by Team Valor’s Moltres. Then a week after that, Team Instinct’s Zapdos will take to the skies. But what does this mean? Are these are one and only chances to catch these Legendary Birds? Is that what makes them Legendary? Will we never see them again? And what about Lugia?

Well we’re still waiting for more details, but if I had to take a guess, one of three potential situations will play out after August 14th:

Now Lugia wasn’t mentioned in any of the Niantic notes, so it’s likely he’ll stay on – but again at much lower rotations. Though I suspect he’ll eventually leave as well for a time once Ho-Oh is introduced. In the anime/ lore of Pokemon, Lugia is tied to Legendary Bird Trio and acts as their balancing force to keep them in check. Similarly, Ho-Oh (the other poster child of Generation 2) is tied to the Legendary Beast Trio Entei, Raikou and Suicune. In the lore, Ho-Oh actually brought these three Pokemon to life – or back to life depending on your interpretation, but perhaps i’ll save this for a Theory Thursday in the future.

Either way, get hunting trainers! Sure the eventual release of Trading can help you in the future should you miss out; but I’m not taking any chances. Even if you don’t managed to catch them, you get a lot of awesome goodies from completing the raid. So get your friends together and go take on these Legends while you can!