A Photo of Flash, Batman and Wonder Woman was released today courtesy of Entertainment Weekly.

Via EW: Ezra Miller speaks out about The Flash’s relationship with his fellow Teammates.

“He annoys everybody, but he doesn’t have any specific beef with anyone.” As for the other members? “Uncle Fish Curry [Aquaman] is very grumpy. Dad [Batman] gets grumpy too. (He’s had a long life of fighting crime.) ­Wonder Woman is very considerate, so even though she’s annoyed with the Flash, she’s still very compassionate.” So… he’s not quite in awe of them, is what we’re hearing? 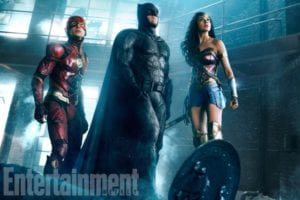