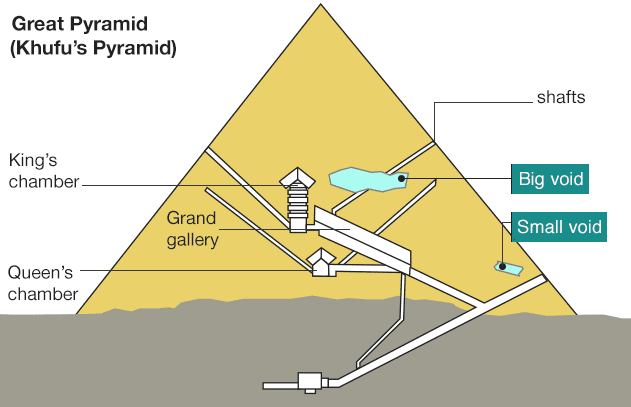 Earlier this week, scientists located a “large void” within the Great Pyramid of Giza (also known as Khufu’s Pyramid), making this the first major structural discovery since the 19th century. Scientists used sensors that detect particles known as muons, which travel at the speed of light and react similarly to x-rays when they meet an object. They do not know what is in of the void, but fans of the Assassin’s Creed franchise could potentially unearth all the mysteries of this new find before archeologists even get inside.

Upon learning of this new discovery, fans tweeted about needing a patch for the game in order to include the void. That’s when developers Jean Guesdon and Azaïzia Ayamar responded that the “void” is already there.

The developers of Origins weren’t just lucky when they created the pyramid within the game. A theory about how pyramids were constructed was proposed by Jean-Pierre Houdin and contained the idea that there were two chambers located above the King’s Chamber and Grand Gallery. According to Maxime Durand, historian for the franchise, they believed that Houdin’s claim of the antechambers was the most credible, so they included it in the game.

“We were betting on the fact that these secret locations inside of the Great Pyramid would probably be discovered in the near future, so we wanted to allow players the chance to visit them in advance.”

The amount of detail is what makes the Assassin’s Creed franchise so rich, and Origins is no exception. The developers paid close attention to history and have delivered the most realistic recreations of ancient Egypt ever. A free educational download will be available in 2018 for Origins that will allow players to explore history without all the violance. Because so much research went into the creation of the game, this DLC is an incredibly powerful tool for learning about classical Egypt.

It makes you wonder what else Assissin’s Creed has “predicted” about undiscovered antiquity.

Gaming: ‘Cuphead’ is the Newest ‘Need to Buy’ Game! (Review)

Pokemon Leaving The 3DS For The Switch – Pros & Cons