As some of the largest animals that have ever lived, it’s no surprise that dinosaurs keep toping the list of largest land animals to walk the planet. Although a newly discovered Titanosaur known as Patagotitan mayorum is completely redefining what we thought we knew about these massive beasts! So how big is it?

BIG! Boeing 737 big! The Space Shuttle Orbiter big! Endgame monster in a Final Fantasy game big! At a staggering 120 feet long, Patagotitan mayorum is the largest land animal on record and only a few whales can actually beat it in terms of weight. Though considering it was still growing, future discoveries could break these records as well. Even so, this titan would have had to eat up to 2,000 lbs of food a day to sustain itself! 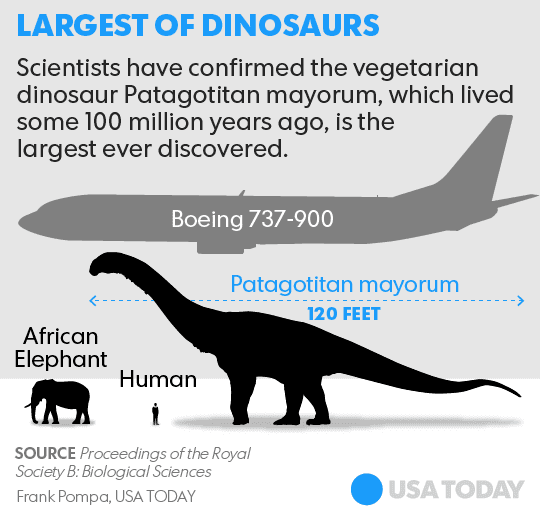 Though just as important as its size – if not more – was how much of this dinosaur was found. Many dinosaurs of this size are only known from fragments of bones, but this specimen had up to 30% of its full skeleton intact. Additionally, multiple other Patagotitan fossils were found around this dig site, which not only shows these massive animals lived in social groups, but also that the area around the Mayo farm in Patagonia was ideal for preserving fossils. A farmer first stumbled upon the fossil back in 2010, but the findings are only being shared now as they’ve had ample time to properly excavate the site.

More scientific detail about this super beast can be found in the Proceedings of the Royal Society B: Biological Sciences, which also begins to tackle how and when dinosaurs started going to large to truly massive. Though one piece of interesting information is that all the members of the larger than life Titanosaur group seemed to appear roughly around 100 million years ago in South America. Between the more tropical climate and vegetation, there are ample factors that could have contributed to this growth spurt. Though many mysteries of their evolution and family classifications still remain.

For now one thing is for certain: We still love dinosaurs and it looks like there are even larger ones on the horizon!