Caution: Spoilers do lie ahead.

It seems the voice of an angel has won the heart of one Walking Dead character. Callan McAuliffe plays Alden on the show, who was initially a Savior that begged Maggie for mercy. Maggie eventually felt comfortable enough to give him a chance at working at Hilltop, and we’re now glad she did. Although Maggie has ridden off into the sunset with Georgie and Hershel, Alden remains helpful to all as he works hard at Hilltop to do his part. In the season 9 premiere, we got to hear him serenade everyone at the funeral of the blacksmith’s son.

So it isn’t hard to believe that Alden has found romance at Hilltop, with none other than Enid (Katelyn Nacon).

It’s been six years since the passing of her first love Carl, so it’s definitely time for a young girl to move forward, although he’s probably still in her heart. We think this pairing is actually the cutest. In the mid-season finale, we see Henry has also taken a liking to Enid and almost asks her to hang out with him after his apprenticeship ends that day. Enid asks Alden to talk for a minute, and when Henry turns around, the two are smooching. *Hearts a flutter hearts a flutter*

We got to chat with Callan earlier in the season, and he was actually asked about a potential romance for his character then with Enid or Maggie, considering his lovely singing voice is sure to attract. He answered that he would be down.

I’d like to think so, I’m always up for a TV show romance.

I’m happy to sing more as well. It makes me feel important because it’s all eyes on me on set. But I grew up singing songs all the time and I’m not the best singer in the world but I get great joy from it.

The romance is pretty perfect. Enid’s character was actually born in the comics, and followed a long intensive romance story line with Carl. Alden isn’t necessarily a comic character. He told us he believes he’s an amalgamation of a few. Now, part of Carl automatically live in him considering he’s with Enid.

The show has taken on a new era which Callan also agrees with. Are you excited to see the development of Alden and Enid in the new era? 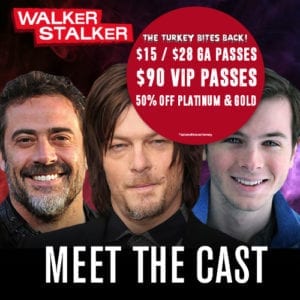 Home » Featured » There’s a new Couple on ‘The Walking Dead’