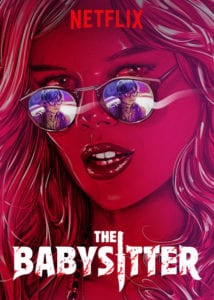 Well, care.com will see a rise in customers after the Netflix Original ‘The Babysitter’ made its debut. I have thought for a few minutes how to describe in words this movie to you dear reader. I will start with I have seen worse movies. However, I have movies I put under what I call “train wreck”. That is when movies are bad but once you have invested so much of your time into them that this sick part of you must finish it. So, I would put ‘The Babysitter’ into the “train wreck” category. So, I will give you a recap of the movie, my recommendation and then let you decide if you would hire ‘The Babysitter‘.

Twelve-year-old Cole (Judah Lewis) is an innocent young boy who is the perfect choice for every bully in the world. He is small, smart and he is kind. So, we get to learn a lot about Cole the first thirty minutes of the movie. What he is afraid of, how he is bullied and that his parents tend to baby him. Enter his hot and protective babysitter Bee (Samara Weaving). She is every boy and probably their dad’s fantasy girl. She has been Cole’s babysitter for a while and they seem to be almost best friends. Cole’s friend Melanie (Emily Alyn Lind)  convinces him that Bee is probably having sex after he falls asleep so Cole decides to find out what exactly happens after he goes to sleep.

What Cole finds Bee doing with her group of teenage friends is a lot more than he ever anticipated. When Cole sneaks downstairs and finds Bee in a circle with her friends playing spin the bottle he doesn’t think it is a big deal. The game turns into a nightmare when Bee kills the groups newest friend Samuel (Doug Haley) as part of a satanic ritual. From there Cole’s night turns into a long series of WTF’s. After Bee’s attempt to take the blood of an “innocence” Cole wakes up tied to a chair surrounded by Bee’s cult of friends. 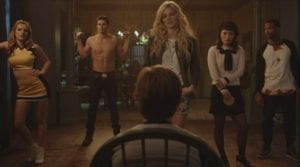 In the circle, he finds Max (Robbie Amell) shirtless. (Now on a side note, a shirtless Robbie Amell could save almost any film.) Of everything that happens I do believe trying to figure out why Max is shirtless is the most disturbing factor for Cole. Things spiral fully out of control as they all decide to kill Cole after he calls the police. Without giving away the movie ending I will say there is a stolen car driven through a house which is always worth a watch as well. Now there is humor, hot actors and bloody gore to fill in the blanks I have left for you. 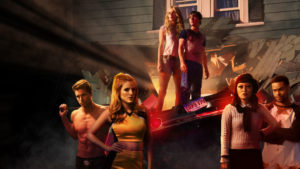 Again, I have seen worse movies in my life and bad movies are not limited to Netflix. As I mentioned there were jokes and humor which I do believe is part of its redeeming quality. So, if you are into horror comedies then I would highly suggest ‘The Babysitter’ but if you are looking for a full-on horror film this one is not going to “cut it” sorry (bad pun). So if you got some time and are all caught up on your binge-watching schedule then give ‘The Babysitter’ a shot but don’t say I didn’t warn you with the “train wreck” that you can’t look away from. P.S. If anyone finds out why Max is shirtless please let me know…asking for a friend.